The Sisterhood of the Traveling Jersey Visits the Emerald City

Share All sharing options for: The Sisterhood of the Traveling Jersey Visits the Emerald City

Memorial Day Weekend is the start of summer, so why in the world did I spend it in Seattle, where the sun barely shines through the unending rain? Because of baseball, obviously. The Padres were facing off against the hated Mariners, and I wanted to take the Traveling Jersey to see it. I flew in Saturday morning, and after catching up with an old friend over some excellent sushi, I was off to see the sights. My first stop was Seattle Center, the city's go to tourist trap. It's easy to find: Just head toward the Space Needle. If you're on 5th Avenue downtown, you can follow the monorail tracks.

My first stop was Chihuly Garden. If you're not familiar with Dale Chihuly, he's a glassblowing artist known for the scale of his projects. They're frequently composed of hundreds of pieces. You can even see his work in San Diego at the Mingei Museum in Balboa Park. 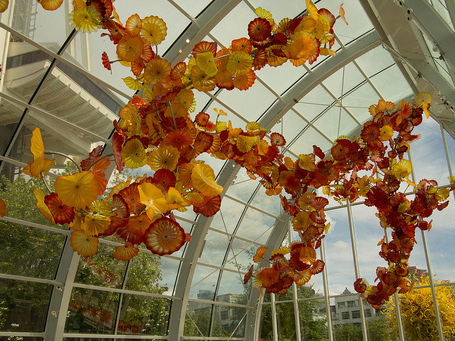 The centerpiece of the museum is the glasshouse, custom built for this sculpture. 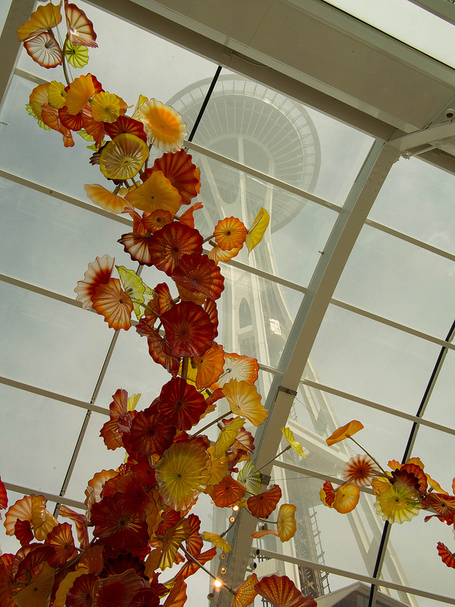 I love how the Space Needle looms over it. 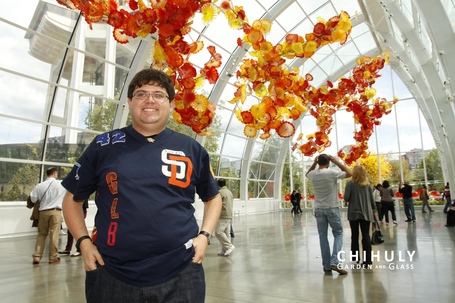 What's really great is that they have a photographer on hand to take your photo in the glasshouse for free! 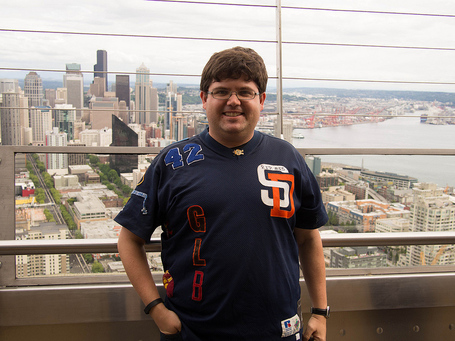 After getting my fill of Chihuly, I went to the top of the Space Needle. It was a long wait (at least half an hour), but the view is spectacular. Bonus: They serve some good beer up top at reasonable prices!

I spent the rest of the night eating and drinking with some old college friends. I don't have photos, but I sampled nearly a dozen beers from Elysian Brewing. I highly recommend their Avatar Jasmine IPA if you ever have the chance. 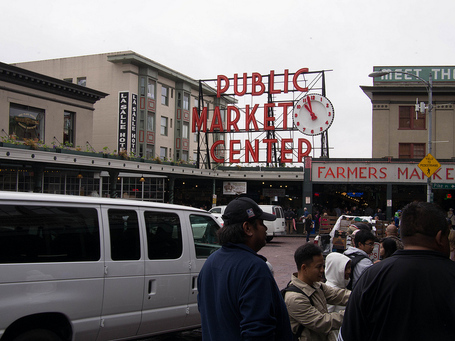 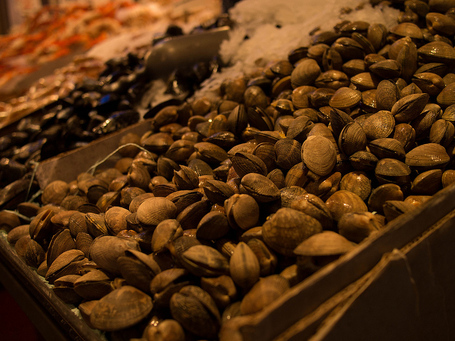 Sunday morning, I went down to Pike Place Market looking for breakfast and some edible souvenirs. I found breakfast at The Crumpet Shop, where they topped a fresh, buttered crumpet with cream cheese and maple butter. Yeah, it was as delicious as it sounds. After taking a few photos and buying some chocolate covered cherries, I prepared to head back. 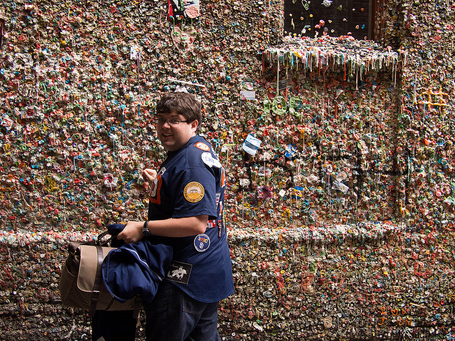 And that's when I stumbled on the gum wall. I'd heard about it, but I was totally unprepared for the scope of it. I had some gum on me, and decided this was a can't miss opportunity for the Jersey to contribute to a delightfully gross piece of public art. 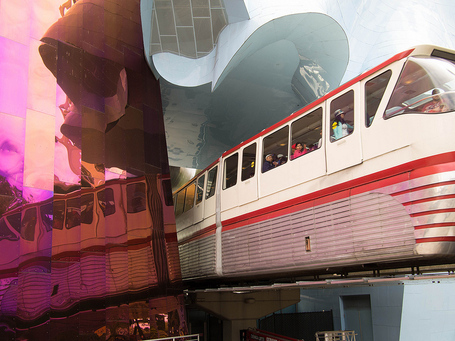 Next up was a museum that has been on my to visit list for a long time: EMP. It's housed in a Frank Gehry building, it covers music, science fiction, and pop culture. They had a great exhibit on Nirvana, a cool exhibit on horror movies with some great original props, and two galleries dedicated to Jimi Hendrix. But for me, the highlight was right at the entrance of the museum. 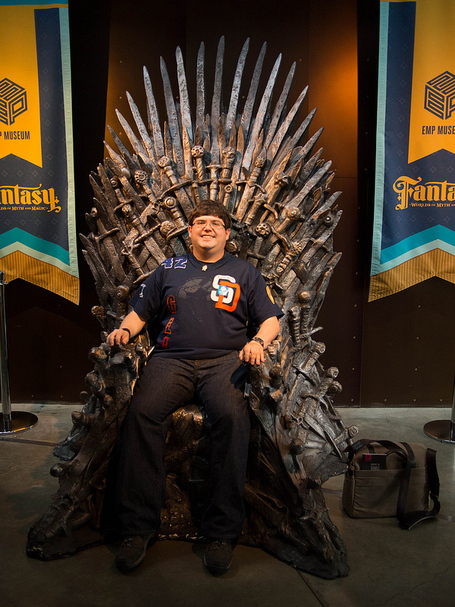 In the game of baseball, you win or you die. Yeah, that's the Iron Throne. It was part of an exhibit on fantasy, featuring original costumes and props from The Princess Bride, Xena: Warrior Princess, and Labyrinth, along with original pages from authors like J.R.R. Tolkien and George R.R. Martin.

After a couple hours wandering the museum, I was hungry and thirsty, so I hit up their bar. After a couple drinks, I struck up a conversation with the couple next to me. They were locals and friends of one of the bartenders, and they were very curious about the Jersey. I told them the story and showed off all the cool additions, and then they bought me a drink. The Jersey is magical, guys. 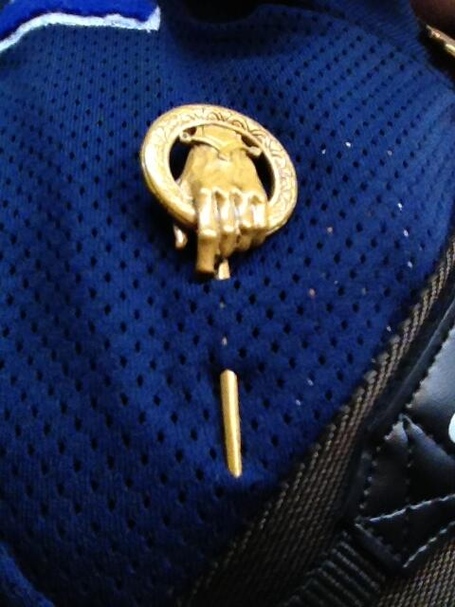 After a little more time in the museum (and a quick stop at the gift shop to pick up an addition to the Jersey) I headed up to Ballard for dinner with a friend (where I ran into San Diego food writer Erin Jackson), I looked up directions to a bar I wanted to check out. Then this conversation happened.

"Oh, you should take 36th there so you can see the troll." 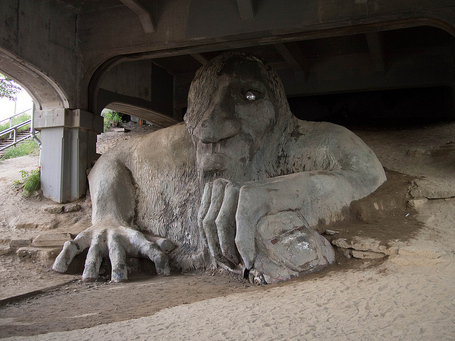 They have a bridge troll. I'm not sure if it's dangerous or not. I ended up spending the rest of the night drinking heavily with Gaslamp Baller matthewverygood. There was skee ball. I didn't do well.

The game the next day was the opposite of memorable, and I urge you all to forget it. I met some great people though. Around the 6th inning, I got hungry and went searching for food. That's when I ran into a couple of Padres fans (not hard, there were a ton of Friar Faithful there) and struck up a conversation. They noticed the Jersey under my jacket, and when they recognized what they were looking at, they had to get a better look. We hung out and talked for a while about the magic of the Jersey and the pain of the game. Brian and Jeff live in Portland and make the trip up to Seattle for the Mariners-Padres series every year. 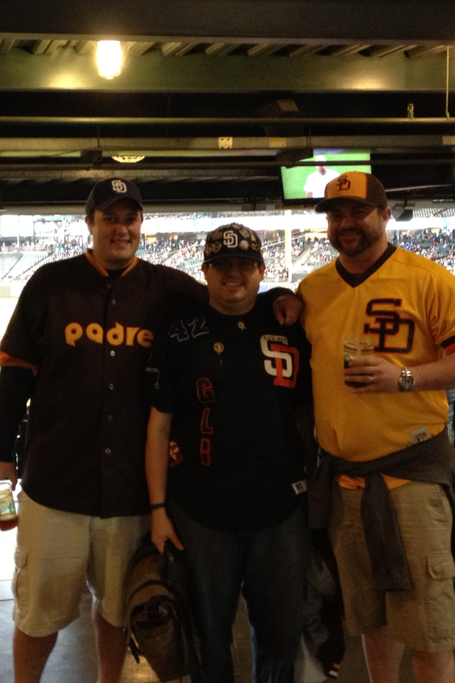 We took a photo together before parting ways. And then the moment I was dreading came. It was time to pass the Jersey off to EvilSammy. 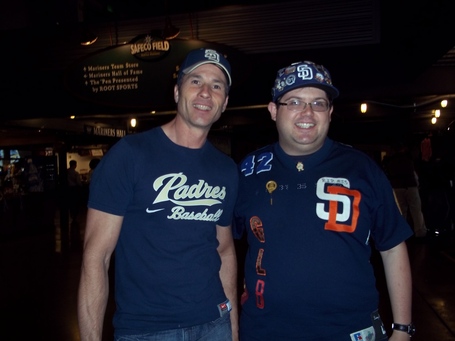 Here's the before photo. See how happy I am in it? 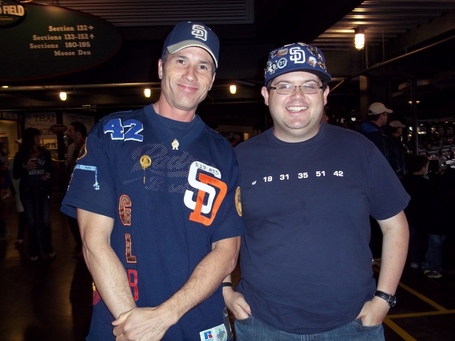 And the after. I know I'm smiling in the photo, but I'm crying on the inside. Thankfully, the rest of my Seattle trip was buoyed by a decisive Padres victory and some rare Seattle sunshine. But nothing was as glorious as those few days with the Jersey.