Share All sharing options for: 19 cards of Tony Gwynn

I haven't even written this post yet, but I'm already thinking about the sequel. It was so difficult to select just 19 cards of Tony Gwynn to feature; each of the hundreds of cards I leafed through has at least one great story of its own to tell. For now, I managed to cull 19 fairly offbeat cards of Mr. Padre that I haven't profiled here before,and set aside about 40 others to pick through for the next time. But before I get too ahead of myself, here are today's 19: 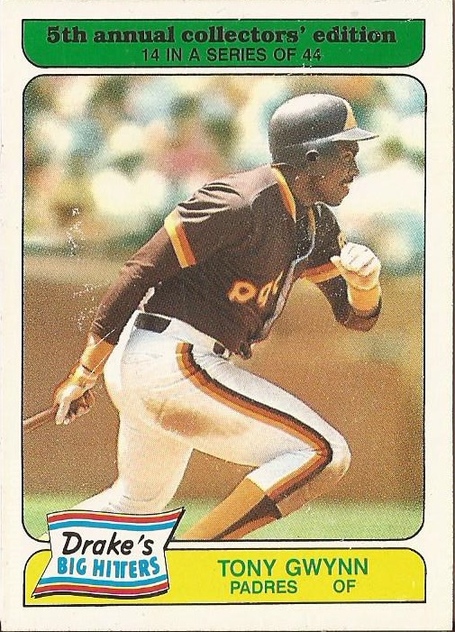 I've always had an affinity for oddball cards, and this is one of my favorites. Mother's Cookies, Hostess and a host of others have packaged baseball cards with their confections, but none of their pastries featured prominently in an episode of Seinfeld. 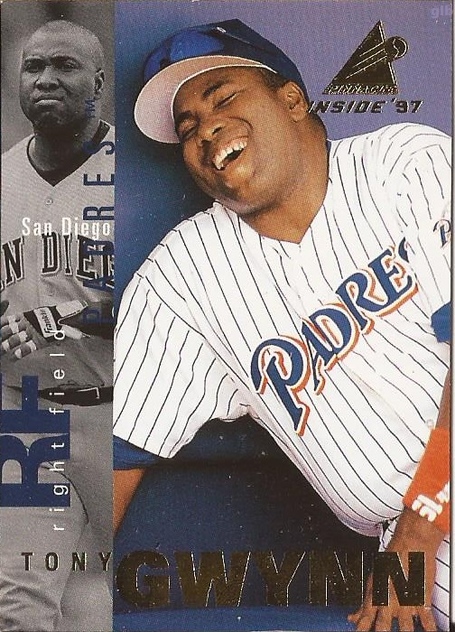 By 1997, there were so many baseball card lines flooding the market that nearly every new one needed a gimmick to stand out. Pinnacle Inside made a name for itself by being the first baseball cards sold in cans. I have one of the cans featuring Gwynn from the following year. I was unsure whether to open it, so I polled my fellow Gaslamp Ballers whether I should, and abided by their ruling; it remains sealed. 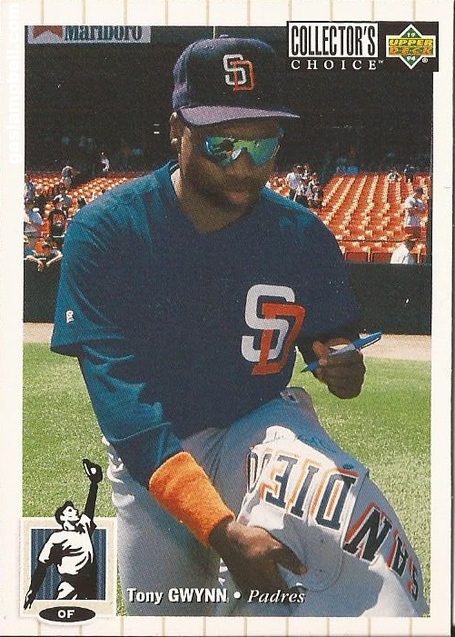 This was always one of my favorite cards as a kid; Upper Deck always had a penchant for getting the shots no one else was taking. As a testament to the kind of person he was, this isn't even the first card showing him signing for fans. 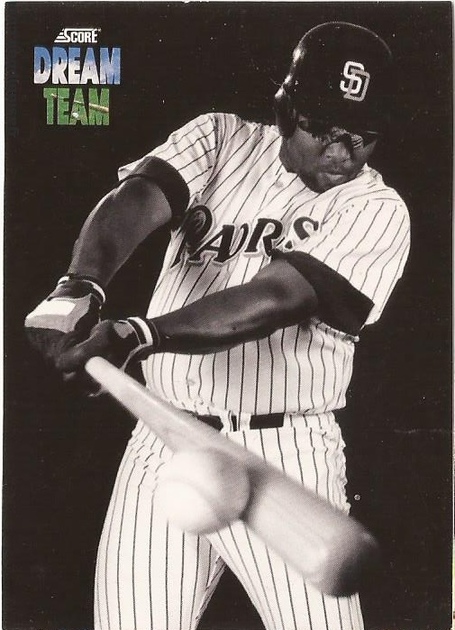 Score's annual Dream Team subset was also renowned for its atypical photography. This is actually the most "normal" photo of any I've seen. Rickey had a penchant for showing up nearly naked each year, and the series was home to several iconic shots. 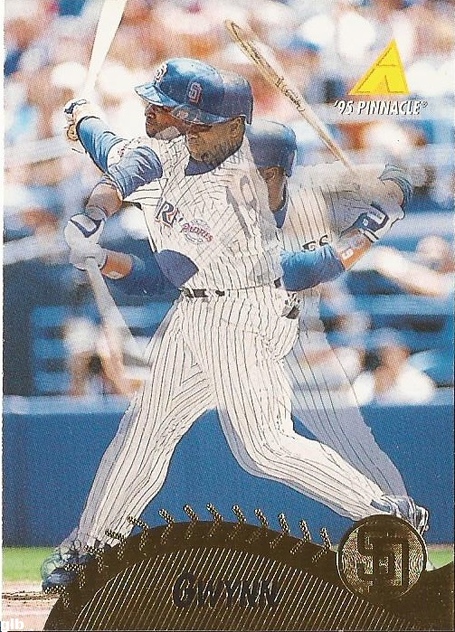 Multi-exposure cards were another Upper Deck innovation, and it didn't take long for others to jump on board. It's done to great effect here and complements a well-designed set. 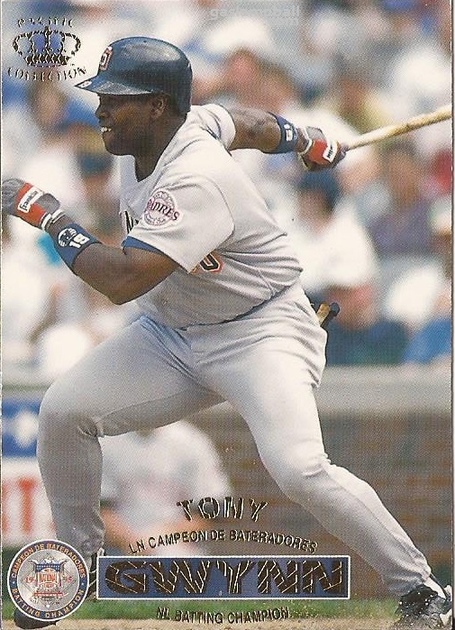 As someone who has always taken exception to the "Why should I have to press 1 for English? I'm in 'merca" crowd, I of course have an abiding appreciation of Pacific and their Spanish-first bilingual issues. It didn't hurt that they made some of the most visually stunning cards of the time, this fairly subdued set notwithstanding. 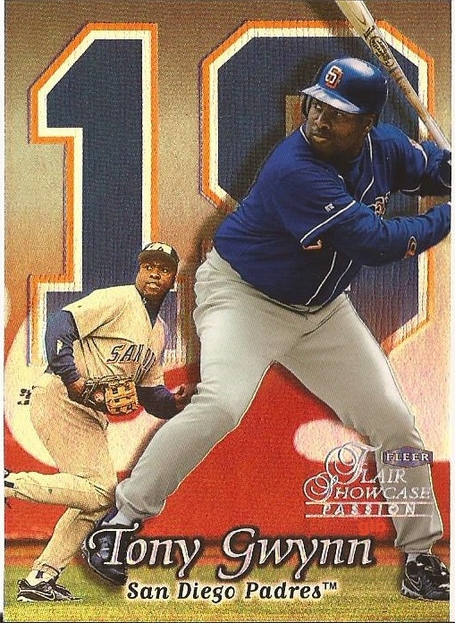 By the late-'90s, Fleer's upscale Flair line was unnecessarily renamed Flair Showcase, and the base set featured three distinct cards each of 144 different players. The three subsets were designated as "rows"; Row 1 was titled "Showcase", Row 2 -- seen here -- was "Passion", and Row 3 was "Power". 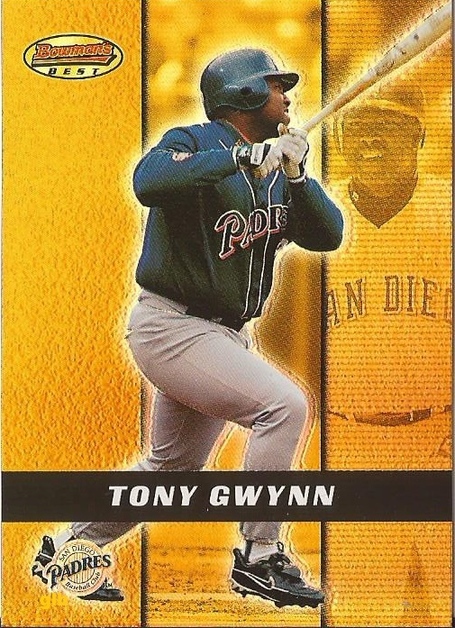 This is one of those cards that a scan doesn't do justice. Granted, it doesn't look bad here, like Topps Chrome cards tend to, but there's an iridescence that isn't captured. It did, however, do a good job of picking up the pocked and ribbed textures on either side, as well as the secondary photo. 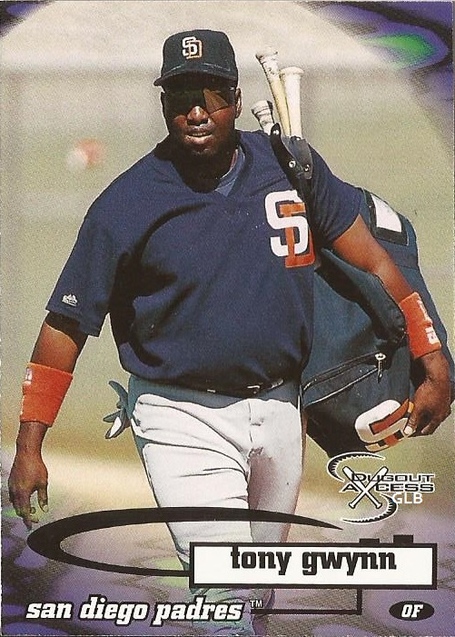 The design of this card is so repellant to me, but the photo makes up for the garish nonsense. Just in case the random mish-mash of line segments and a spilled lava lamp weren't enough of a snapshot of the times, Skybox felt the need to get x-tra x-treme and wedge an 'x' into the word access. But once you get past all of that, what your left with is a picture of a master craftsman carrying his toolbox to the job site. 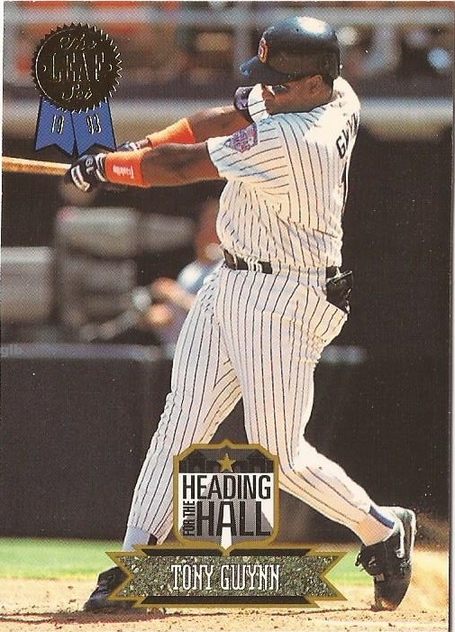 Good call by Leaf recognizing that Tony was Cooperstown-bound barely halfway through his career. In fact, they were on point with nine out of their ten predictions, with Roger Clemens being the lone holdout. 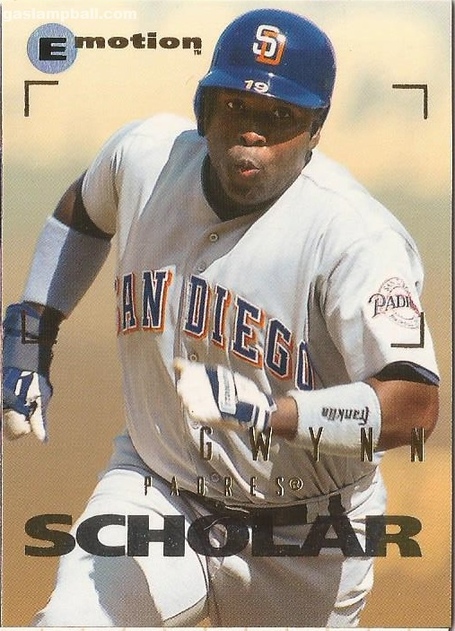 In this set, each player was assigned a unique word describing them or that particular picture of them. In this case, they hit the nail right on the head when describing Captain Video himself. 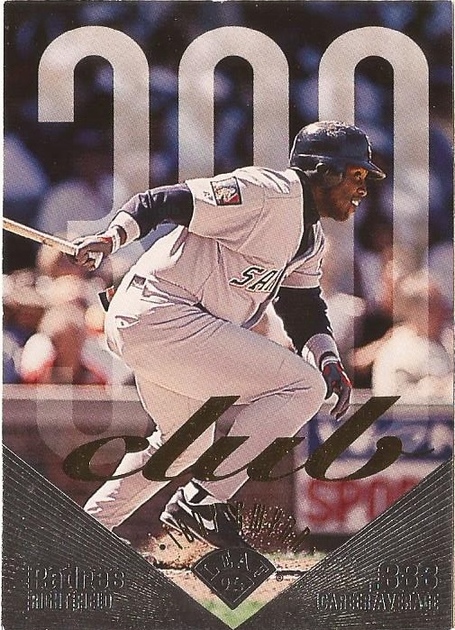 This insert set commemorated the 18 active players with a .300 or better career batting average with a minimum of 1,000 at-bats. The numbering was seemingly random, as Gwynn's card is #13 despite him having the second-best career average in baseball at the time - .333 to Wade Boggs' .336 mark. 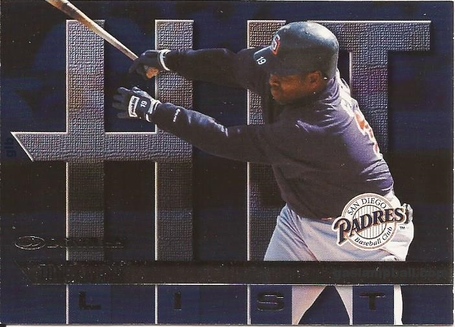 By the time 1997 Donruss and its similarly themed Hit List subset rolled around, Gwynn had overtaken Boggs for the top spot; in two seasons he raised his career batting average four points to .337 while Boggs saw his slide three points to .333. Gwynn would remain the major league leader until he retired. 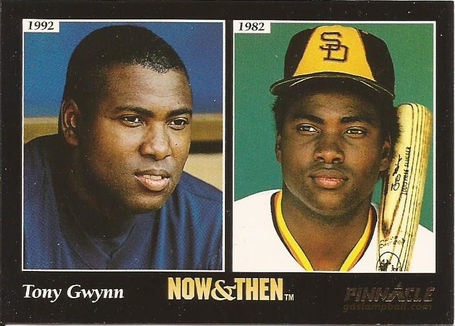 This card has always seemed backward to me, but I suppose "Then & Now" wouldn't sound right. 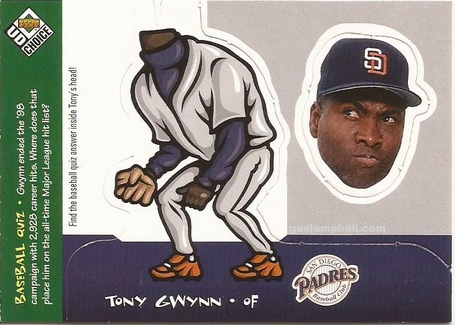 This is one of the odder Tony Gwynn cards I have. It is meant to be dismantled and assembled into the strange offspring of a bobblehead and a paper doll. I might do that if I ever stumble into another copy, but this one will remain a card, albeit a weird one. On an aside, how un-Tony is that face he's making? I'd love to know the context there. 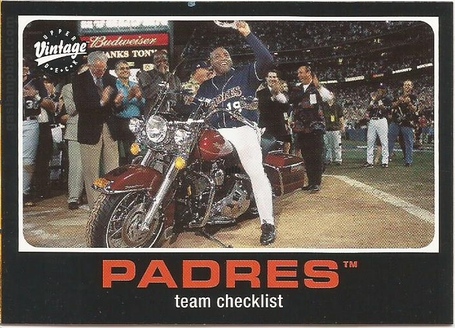 Strangely, this is not even the only card I have of a Padre on a motorcycle; I have one of Ken Caminiti from a few years earlier. This photo was taken at Tony's retirement ceremony; at a quick glance I spot Jerry Coleman, Steve Garvey, Ryan Klesko, and Rickey Henderson. "Rickey gets on" indeed. He wasn't talking about other people's baseball cards when he said that, but he could have been. 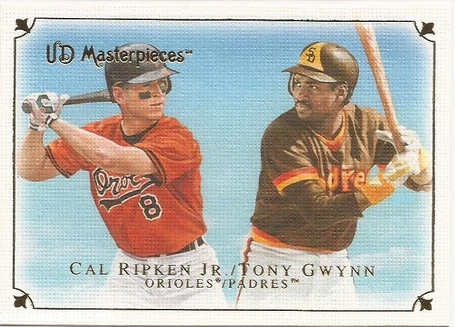 This is my favorite card from what might be my favorite set of the past ten years. UD Masterpieces was incredible to start with, but this dual issue takes it to another level. Not only are these two Hall of Famers who share so many parallels a perfect pairing, the execution is flawless. 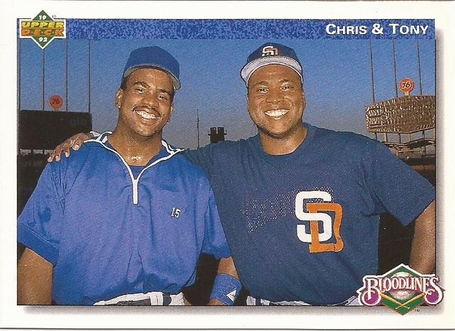 One of those aforementioned parallels between Gwynn and Ripken showed up in Upper Deck's 1992 Bloodlines subset. This card immediately follows one of Cal and his brother Billy, who were teammates at the time. While Chris played for a division rival at the time this card was made, he eventually joined Tony on the Padres in 1996. 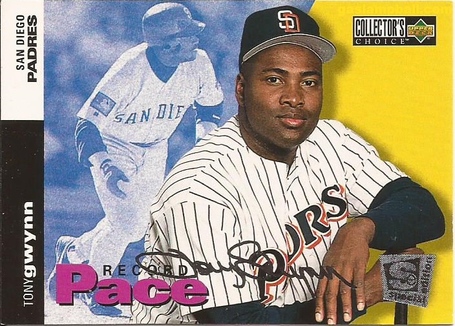 To this day I am convinced that Tony absolutely would have hit .400 in 1994 had the strike not interfered, and nobody can tell me otherwise.

While there's no way of determining the 19 greatest Tony Gwynn cards -- there are others I like more than some of these at any given time -- I think these are 19 of the greatest. And so are the next 19. Now, if you'll excuse me, I have some scanning to do.