Cashner on cardboard: The new stuff

Share All sharing options for: Cashner on cardboard: The new stuff

I finally got around to getting some 2014 baseball cards yesterday, albeit due to no effort on my part. A few showed up in my mailbox yesterday thanks to my pal Marcus. Along with four Joey Cora cards, an assortment of older Padres, and a couple of guys with the same elbow tattoo as me, he included these two Andrew Cashner cards from this year.

The first card is Cashner's card from Donruss's Breakout Pitchers insert set. Panini Brands revived the Donruss name this year after nearly a decade. The set has its limitations, most obviously the lack of logos and team names due to Topps' monopoly on MLB's blessing. It actually doesn't look so bad here, since he's angled in such a way that you don't see glaring blank spots on his hat and jersey.

The one on the right is the red parallel of Cashner's 2014 Topps base card. It's one of a ridiculous twelve parallels Topps has churned out this year. Next year they'll probably invent new colors just to give us junkies 82 borders to chase. Marcus himself has already tracked down 11 of the 12 parallels and made a cool gif of them one after the other.

The backs of both cards are basic, without photography, but provide interesting information for the casual fan. They each make a point to mention his first complete-game one-hit shutout, which he has since matched. 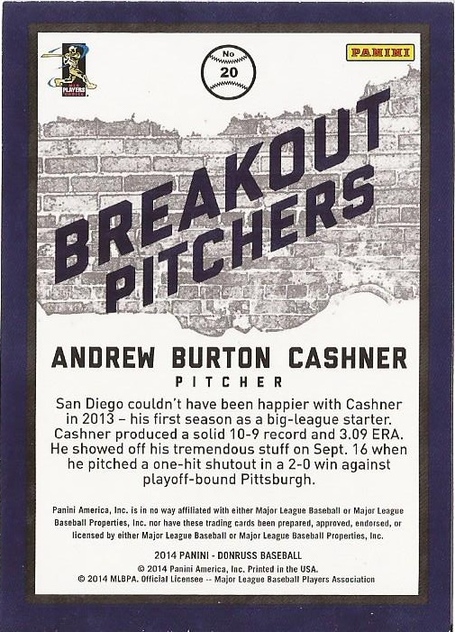 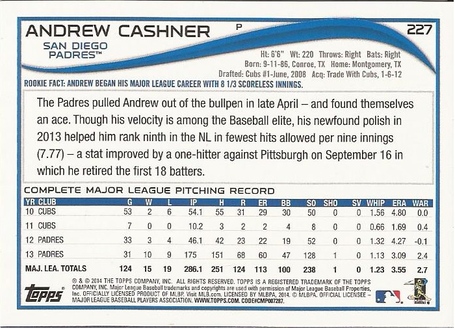 One feature of this year's Topps set that made some ripples is their inclusion of WAR amongst the stats on the back. Some of us thought it was long overdue, while others called their grandchildren to bemoan the basement-dwelling mama's-boys destroying our beautiful game with this acronym nonsense. Can't please 'em all, I suppose.