Error cards come in many forms. Better-known variants include reversed negatives or a photograph of the wrong player, but most errors are less glaring and slip through the cracks. Jedd Gyorko has fallen victim to Topps' shoddy quality control at least twice already in his nascent career.

I encountered my first such Jedd Gyorko card a couple of summers ago. His 2012 Topps Pro Debut All-Stars card, "number" AS-JG, features some glaringly poor Photoshop work on his batting helmet on the front, but that's not considered an error. You have to flip the card over for that. 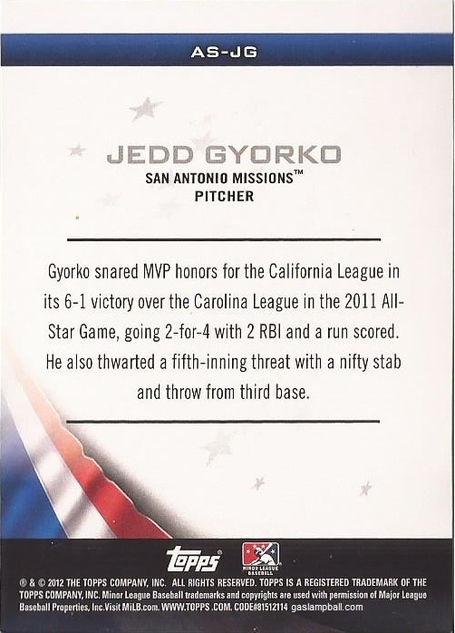 Hey, he's not a pitcher! Do they even double-check these things? It would be more understandable if it wasn't right above a paragraph talking about his hitting and ending in the words "with a nifty stab and throw from third base".

The next typo was on the back of his 2013 Topps rookie card. I have a copy of it around here somewhere but couldn't find it, so I scanned my copy of the Topps Chrome version. They're the same on the front and back except for the card number and, you know, the whole chromeiness thing. I could live without a dozen versions of the same card but whatever, this isn't about that. See how long it takes you to catch the typo on this one; it doesn't jump right out at you like the other one. 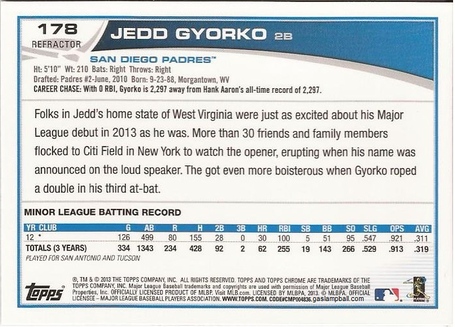 It's subtle, but it's a screw-up nonetheless. I can see how an editor would miss that; the misspelled word became a properly spelled common word, and I'm sure they just give the backs a quick once-over instead of perusing (proper usage!) them since they have several hundred cards to check.

It should be interesting to see if/how Topps does him wrong this year.