I was looking for a different card and came across this pair of Lance Zawadzki cards I had forgot about. I remembered Zawadzki's brief time with the Padres in May and June of 2010, along with the fact that he is a San Diego State alumnus; I just forgot that I owned any cards of him. Another thing I forgot was the interesting bit of trivia on the back. 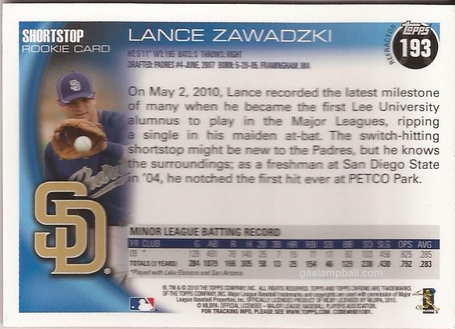 That's a pretty good trivia question. It's a little tricky, since some people might instantly think the answer is Brian Giles, but Giles was about a month late. Zawadzki's hit was a first-inning double in a 4-0 Aztecs win over Houston on March 11, 2004. In addition to his historic hit, Zawadzki was also the only SDSU player in that game to reach the majors; the losing Cougars also had one future major leaguer. Pinch-runner Rob Johnson went on to catch seven years in the majors, including one with San Diego, and is now reinventing himself as a pitcher in the Padres organization.

The reason the back of the card is blurry in the middle is because these cards won't lay flat on the scanner due to the dreaded "Chrome curl". That's nerd-talk for saying that Topps Chrome cards tend to bow out toward the middle due to the process used to put the thick plastic-like coating on them. That's not as interesting as the first hit in Petco Park history, but you never know when it might come up in conversation.