Today is Steve Finley's forty-ninth birthday, and you know how I observe birthdays: with baseball cards. I'm not much of a Steve Finley collector, so I only have 12 Padres cards of him. Lucky for me, that's the number he wore with the Padres and nearly every other team he played for, so the headline looks calculated. 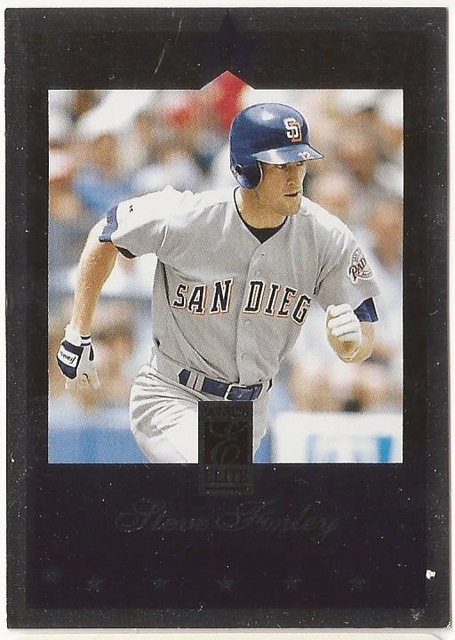 The scan really doesn't do this one justice. It's extremely foil-laden with navy insets. They look a lot better when photographed. 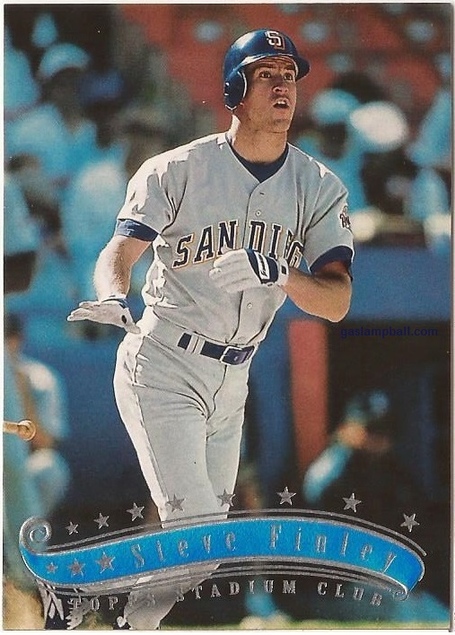 This is my favorite Stadium Club design. You can't really tell, but the blue ribbon is Refractor-like and embossed outward. It features a good shot of Finley, too; it looks like he might have got a hold of one of the 30 homers he hit in 1996. As noted on the back, that was three times as many as he hit in 1995. 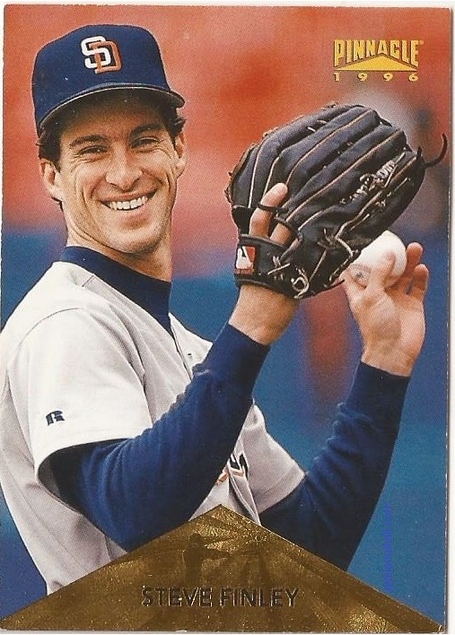 This is about as perfect as a baseball card can be without having Joey Cora on it. Beautiful in every way. 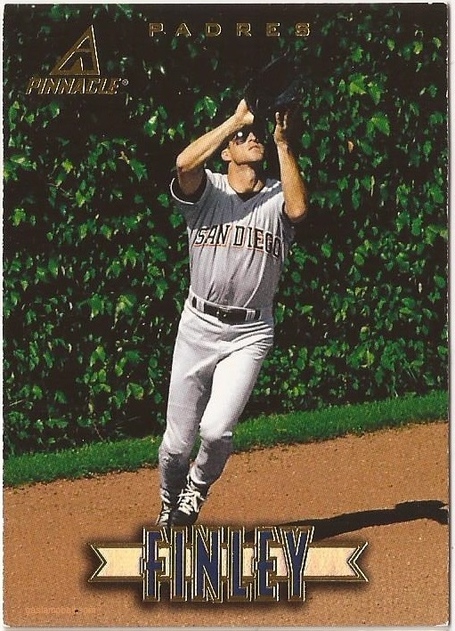 Pinnacle's followup effort was a strong one. I like the last-name graphic at the bottom, and the ivy-- wait, is that his hangdown? If so, that's downright Jon Hamm-ish. 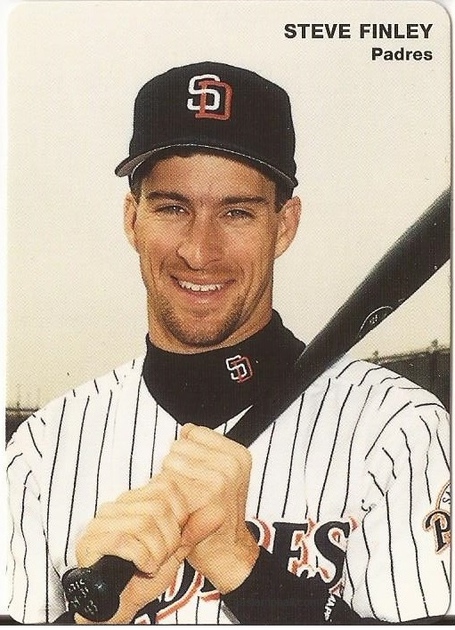 I'm not sure whose bat that is, but it isn't Finley's. He used light-colored bats during his time with the Padres. Also, that fauxtee looks especially out of place on his typically close-shaven face. 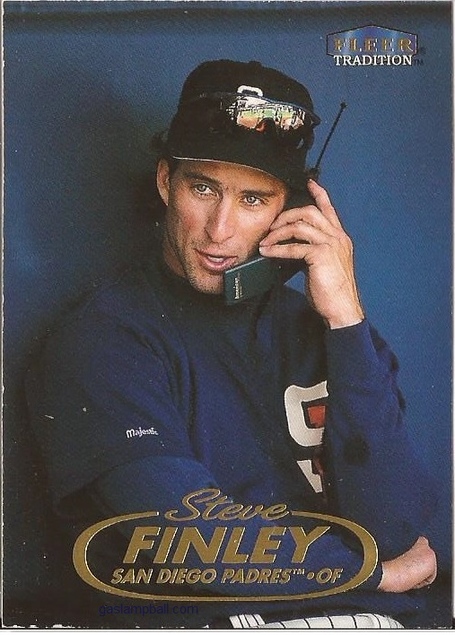 Here's this card again
I haiku'd it recently
And again today 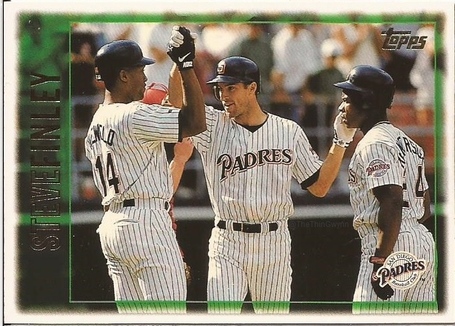 I love the Rickey cameo on this one, and I bet Rickey does too. The back features either a horrible or wonderful pun, depending on your perspective: 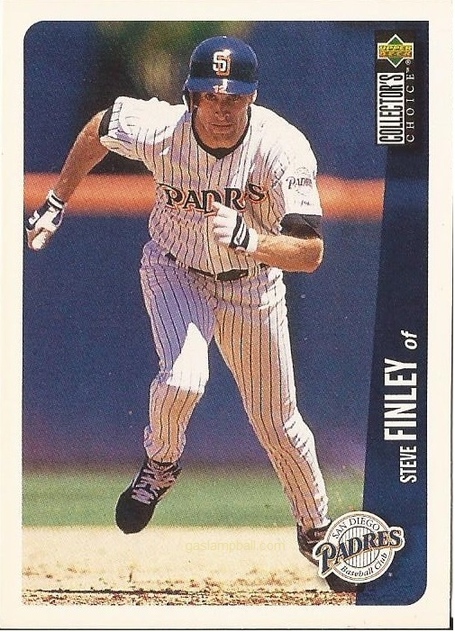 The trivia question on the back inquires about the franchise's first home run, which was also the first hit. Do you know who hit it without looking it up? 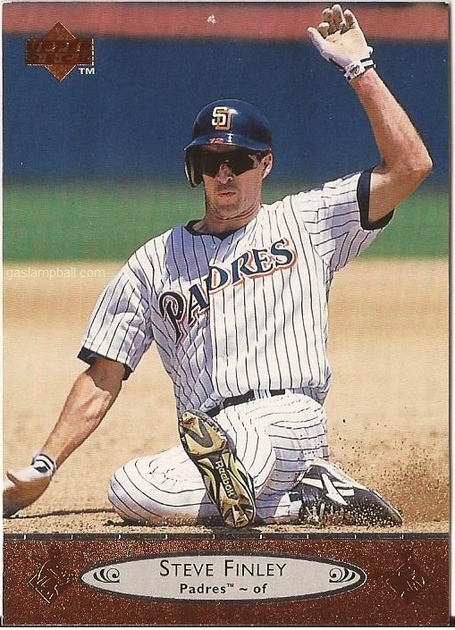 A lot of people hate on the '96 Upper Deck set, but I've always liked it. 1996 was the year I wandered away from collecting for about a decade, because I had recently turned 13 and began spending my baseball card money on booze and stuff of that nature. Needless to say, if I had it to do over again, I would have stuck to cards. I'd probably still be a big loser, but I'd be a less pathetic one. Let the tattered remains of my wasted life be a lesson to you, kids. 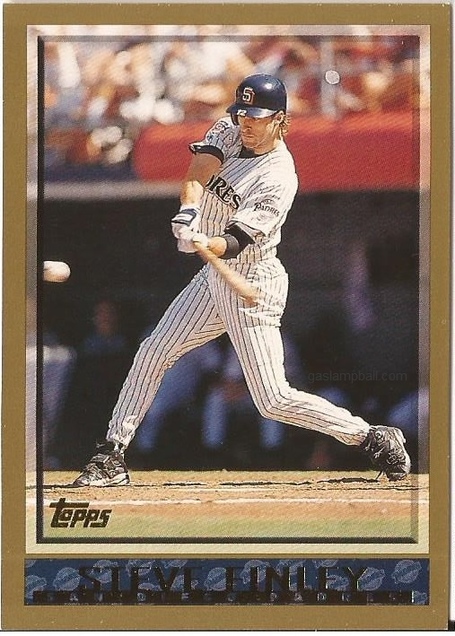 Well, that got dark all of the sudden; I need a distraction. Hey, look, there's Steve Finley locked in on a pitch, ready to pull it over the right field fence at The Murph. Or The Q. Or whatever. The back makes note of Finley's team-record two three-homer games in 1997. 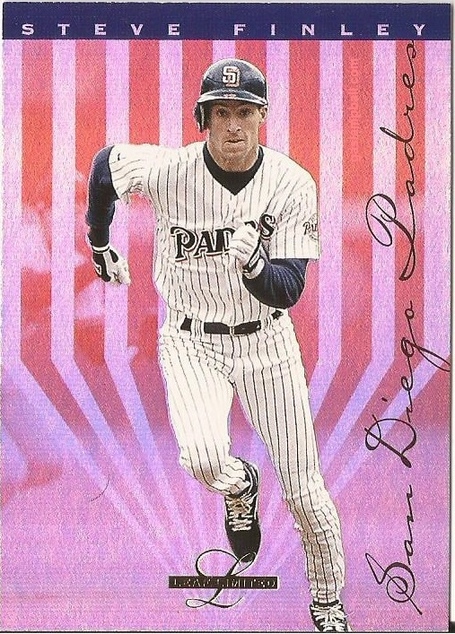 This is another example of a card with an iridescent background looking far different in hand versus in scan. The stripes are much more orange than whatever that is, and the general pink haze is nonexistent. 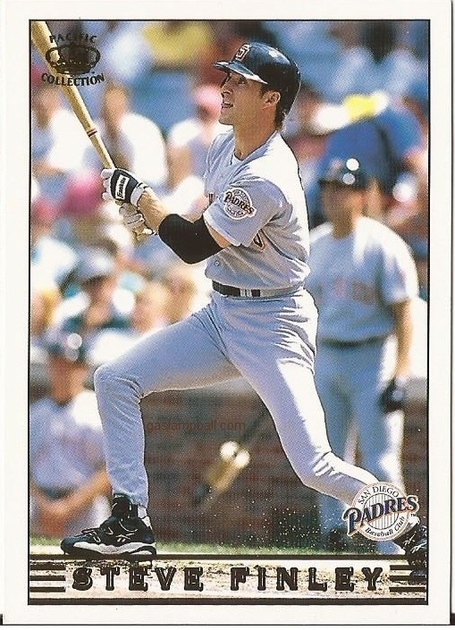 Pacific was probably my favorite trading card company. Between the bilingual backs (primarily in Spanish, with a smaller English translation below), and the wild foil-heavy designs, something clicked. This was likely their most restrained issue, and it works.

While those are the only twelve cards I have of Finley pictured as a member of the Padres, you still haven't seen my favorite Steve Finley card I own. It's from his days with the Astros, before the massive trade that sent him to San Diego. As soon as you see it, you'll understand why I love it. 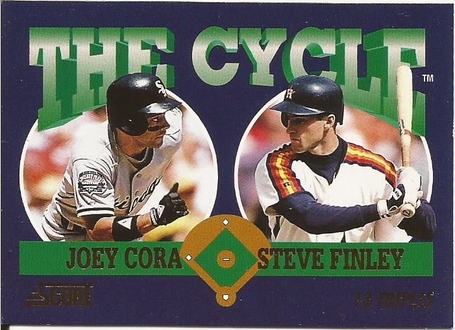 Happy birthday to Steve Finley. I might not have the most cards of him in the world (that would probably be Marcus), but he'll always have a place in the most important part of my collection.