Birthday Card: Brian Williams and the trade heard 'round the world

Share All sharing options for: Birthday Card: Brian Williams and the trade heard 'round the world

I saw that today is former Padres pitcher Brian Williams' forty-fifth birthday and I was pretty sure I had a card of him, so I looked for it in the box where I keep Padres with last names starting with 'W', 'Y', and 'Zawadski'. Nope. It went right from Alan Wiggins to Eddie Williams. Then I remembered that I have one card with Brian Williams on it, although he does share space with nine other guys.

This checklist from the 1995 Upper Deck Collector's Choice set has been one of my favorite cards since I pulled a copy of it from a pack way back then, Tony Gwynn years ago. The sidebar on the front spells out the premise of the card, while the back goes into more detail. 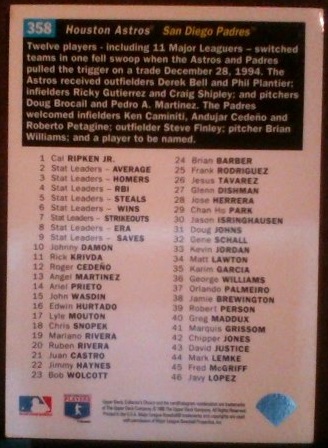 You may have noticed that, despite the trade involving a dozen players, only ten are pictured on this card. There's an easy explanation for the missing Padre: Sean Fesh was the player-to-be-named-later in the deal and he never reached the majors. As for the absent Astro, it's hard to say why Derek Bell didn't make it to the photo shoot. He could have been faking an injury, smoking crack, or staging a one-man "Operation Shutdown" - all of which are things he has actually done.

While this trade laid the foundations for the 1996 division championship and 1998 pennant, Brian Williams didn't stick around to experience either one. He went 3-10 with a 6.00 ERA in 72 innings over 44 games in his only season with the Padres. Williams signed with the Tigers and some how repeated his 3-10 record, although with a 6.77 ERA this time. After that he made stops in Baltimore, Japan, Houston again, the north side of Chicago, and Cleveland, as well as numerous minor league towns, before hanging up his spikes at the turn of the century.