A week or so ago I got an envelope of cards from Sam. On top of the the stack was what has become a scarcity: a Joey Cora card I didn't already have. I have a handful of Joey's minor league cards but this one, his 1989 CMC Las Vegas Stars issue, was new to me.

The first thing I noticed about the front of the card is that Cora is wearing a Stars jersey and a Padres hat. He's wearing the same thing on the front of his 1989 Pro Cards Las Vegas Stars card, but that's a story for another day. I assume the photographer did it this way since he was on the cusp of the majors - he played 77 games for the Padres in 1987 but spent all of 1988 in Las Vegas - and this way the photo could be cropped tighter for a big league card. It makes me wonder if any of his major league cards that show him from the shoulders up - his 1987 Bohemian Hearth Bread card, for instance - are from a session of this sort. Then again, maybe Joey just goofed up and forgot his Stars hat, because all of his teammates in the set are wearing their Las Vegas lids.

Joey had a phenomenal season for the Stars the year this card was issued, but I'll save the details for my post about his aforementioned 1989 Pro Stars card since I burned up the mismatched-hat angle on this one.

Along with this card, a Scott Radinsky card, and some Padres from the 2013 Topps set, Sam sent along another Joey Cora card. It's from Joey's White Sox days, but as many of you know, I collect those too, along with all of his cards from his days with the Mariners and Indians. The latter ones are fewer and farther between since he spent just the last 24 games of his career with Cleveland. Speaking of farther, I'm getting miles away from my original point, which was that I'm very appreciative of the 1992 Fleer #76 that he sent. It's a card I don't have all that many of, so this one is just my seventh. 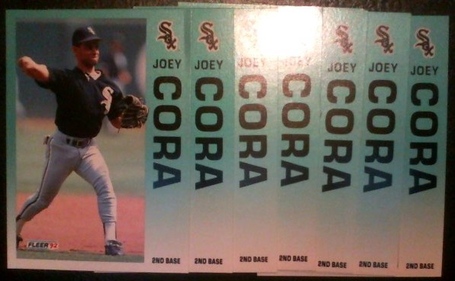 If you have one of these or any other Joey Cora card, send me an email (my address is listed in the masthead), and I'll trade you way more than it's/they're worth. Or, you know, Christmas or whatever. My half-birthday is next month; hint, hint...