Inaugural Padre Dick Kelley was born on this day in 1940. He's pictured here on his penultimate baseball card, 1970 Topps #474. After years of being on cards as a member of the Braves, Kelley also showed up on cardboard as a Friar in 1969 and, finally, 1972.

Selected with the Padres' fourteenth pick in the expansion draft, Kelly opened the season third in the starting rotation and set career highs in starts, innings pitched, and accordingly, all other accumulated stats. Despite the increase in workload, Kelley's rate stats were in line with his career marks. His 3.57 ERA was a smidge over his final of 3.39, and his 6.4 strikeouts per nine innings was right on the dot.

The reason Kelley didn't have a card issued in 1971 is that he missed all of the 1970 season with a fouled-up left shoulder. As you can see on the front of this card, and read on the back, that's the one he threw pitches with. He was all healed up by the time the 1971 season came around, but was relegated to bullpen duty that year, making only one spot-start. Despite posting a 3.47 ERA with a WHIP and walk rate better than his career averages, San Diego let Kelley walk after the season. He latched on with the Rangers' organization for the 1972 season, but hung 'em up after nine unsuccessful relief appearances for their AAA affiliate in Denver. 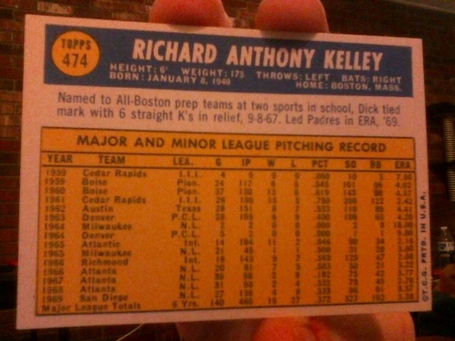 Like legendary Hall of Famer Rickey Henderson and current Padres farmhand Jason Lane, Dick Kelley had the fairly unique distinction of throwing left-handed and batting right-handed. This leads me to believe that Kelley played for the love of the game without having an overbearing parent pushing him into it. If his father was dead-set on little Dick "making it", he would have made him hit lefty, like so many sports dads do, even to righties. It seems to me that a lefty hitting right-handed just saw how his friends were batting and rolled with it. While I'm drawing conclusions, I'm going to surmise that Kelley didn't go to a parochial school, because my mother was born a decade after him and got her digits thwacked by a nun's ruler any time she tried to use her (natural) left hand for anything.

Unfortunately, those guesses will remain guesses, as Dick Kelley is not available for an interview. Kelley passed away on December 11, 1991 at the young age of 51.