It seems hard to believe that Akinori Otsuka is already 42 years old. Then again, it has somehow already been eight years (and a week) since the Padres traded him to Texas, and he wasn't exactly a spring chicken back then, so it all adds up. I guess it's just the eight years thing that's hanging me up; it feels like it was yesterday.

Aki is pictured here on his 2005 Topps Heritage card, number #372, which was released right after his excellent rookie campaign. The design mirrors the 1956 Topps set, both on the front and back. 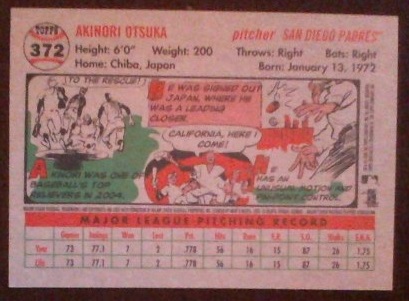 The triptych of cartoons is nice and all, but the really impressive stuff is down there in his stat line. Man, he was good that year. He vultured seven wins against only two losses while posting an ERA of just 1.75 backed by a K rate of 10.1 per nine innings. Otsuka finished third in 2004 NL ROY voting behind former Friar Jason Bay and teammate Khalil Greene.

Otsuka experienced a sophomore slump in 2005, but his bad was still pretty good. He became a member of the Rangers the next season after being traded with Billy Killian and the original Adam Eaton for Adrian Gonzalez, the Chris Young who pitches, and Terrmel Sledge. Texas gave Aki the chance to close that he was denied in San Diego due to the presence of some guy named Trevor, and Otsuka excelled. He saved 32 games in 2006 while posting a 2.11 ERA. Aki ceded the closer role to free agent Eric Gagne in 2007 but pitched well in his old setup role before an elbow injury ended his season and his career.

I hope Aki has a wonderful birthday and that no ants attack his cake. But if they do, he knows who to call.