I have several Randy Jones cards, but this is both my oldest and my favorite. It's from the iconic 1975 Topps set; he was previously featured in the 1974 Topps set following his rookie season. In addition to the colorful and memorable front, the back of this card also captures the era. 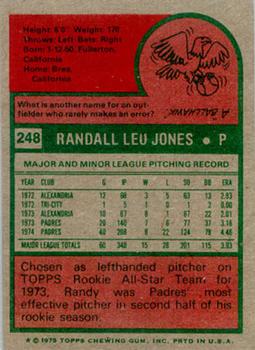 I enjoy the cartoon, but I feel like that trivia question is obsolete. I can't recall hearing anyone refer to an able-handed outfielder as a "ballhawk", but maybe I wasn't paying attention. "Boy, he's a real ballhawk out there." Nope, doesn't sound familiar.

It was nice of Topps to choose not to mention that Jones led the National League with 22 losses in 1974. They wouldn't gloss over his most recent season on his 1976 and '77 cards, as he finished second in Cy Young Award voting in 1975 and won it in '76, making the All-Star Game and receiving MVP votes each year.