Jorge Velandia is very fascinating to me. Off the top of my head, I can't think of another player who was so fringe for so long. I'm sure there are at least two or three guys who could give him a run for the dubious crown, but I don't know about them because flying under the radar is pretty much the whole idea.

Velandia managed to play tiny portions of eight seasons over twelve years with six teams. The most at bats he got in one season was 58 when he hit .190 for the 2003 Mets. It sounds bad but that's actually one point better than his career average and 190 points higher than his average each of the previous two seasons, when he went hitless in 15 ABs spread over '01 and '02. It was enough to keep him out of the Majors for the next three seasons. He persevered, though, and made the most of his next opportunity, responding with his career year for the '07 Devil Rays, hitting .320 with both of his career home runs in 50 at bats over 14 games.

He got into 10 games his next and final season- 3 for Toronto and 7 for the Indians. Over the span of his career, he played in a single-digit amount of games in a season twice and had single-digit ABs in three. He hit .125 or worse in five seasons. One of the others was a .250 showing when he singled in four ABs for the '98 A's. In his six stops he wore seven uniform numbers, wearing two different ones with three teams. He wore 13 with three teams and 11 with two.

Since retiring, he became a coach in the Phillies system. He was named their minor league Assistant Field Director in 2012 and continues to hold that title to this day, his thirty-ninth birthday. 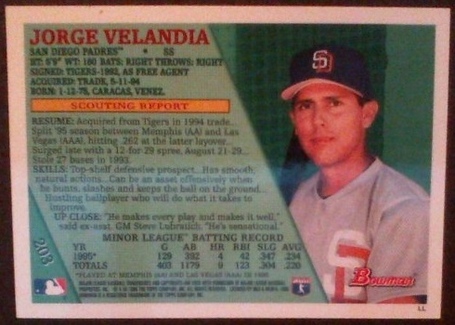