Harold Reynolds played for the Padres?

Indeed he did. Well, kind of. After a 1993 season spent with the Orioles, the long-time Mariners second baseman signed with San Diego as a free agent. Reynolds was slated to be the Friars starter at second but lost the job he had yet to actually hold when the team decided in spring training to use Bip Roberts as the primary second baseman. With less than a week remaining before the season opener, Harold was dealt to the Angels for reliever Hillary Houston Hathaway. Reynolds went on to play 74 games with California in his swan song season while Hathaway posted an ERA over 6 the next two seasons with AAA Las Vegas, never reaching the majors again after the trade.

So, next time he says something on MLB Network that makes you do a double take, cut him some slack. He's a former Padre, after all. 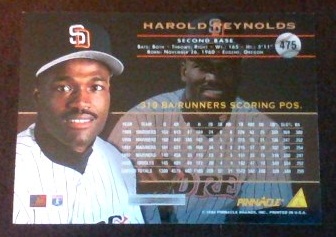