About a week ago I asked on Twitter who people would like to see a Cardboard Corner feature about. Archi was the favorite but I bought a card of him way cooler than the ones I have now so I'm waiting to write about him until that shows up in my mailbox. Gaslamp Baller Bobby Cressey had the great idea to do one about the Mike Piazzas and Greg Madduxes of the world, players who made their name elsewhere and showed up in San Diego toward the end of their careers. I'm still in the lab with that one, perusing both yearly rosters over at Baseball Reference and boxes of cards up in the spare bedroom/ office/ smoking room/ whatever that room full of random stuff next to the bathroom is.

A couple people suggested Benito Santiago and he seemed like a good subject because there are a lot of cards of him as a Padre. I don't make it a point to collect him but I have twenty-some of his cards just because he spent six years with the team and was fairly popular in that time so the number of cards made of him at the time far exceeded everyone but Tony. Additionally, so many of those cards are pretty damn cool.

I decided to focus on some cards of him throwing (or getting ready to) because that was my favorite part of his game. 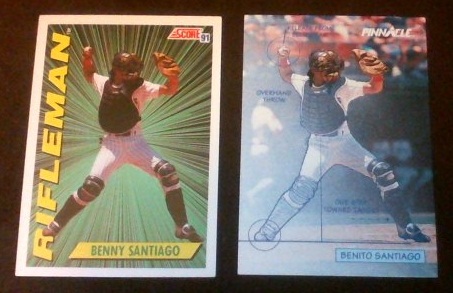 I've always thought both of these were really cool but until I saw them together today I didn't realize they used the same photograph. Also interesting to me was that the Score/ Pinnacle company decided to stop calling him the ridiculous "Benny" after 1991. Still, pretty nice even though he stood up to throw that time.

Speaking of him throwing from his knees, I was unaware that anyone kept stats on standing vs. kneeling splits but Score was all over dat ish way back in '89: 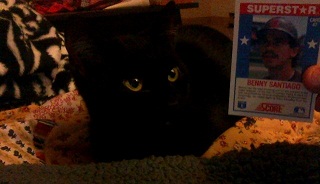 Since it's too small and blurry to read and I'm unwilling to take a picture of it that doesn't involve a pwecious wittle kit-kit, I'll just tell you what it says:

"Benny has the best throwing arm of any catcher in the major leagues. Of the first 74 runners trying to steal on him, he gunned out 33 for an impressive 49 percent rate. Amazingly, he nailed eight of them throwing from his knees."

All this talk about guns and his rocket arm leaves me thinking about one thing: