Share All sharing options for: Why Was Tony Gwynn Wearing Scott Sanders's Jersey?

This isn't an error card; that's clearly Tony The Gwynn at bat wearing Scott Sanders's #27 jersey. As a matter of fact, it even says so on the back: 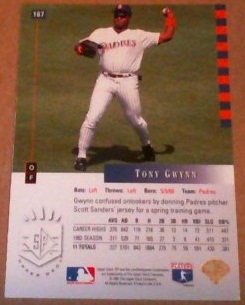 So, why was he? As a kid I always wondered and thought of all sorts of reasons why. I thought maybe somebody had stolen his jersey (he is Tony Gwynn, after all) or maybe he was just messing around or playing a practical joke of some sort.

Turns out it was nothing all that exciting. According to Sanders himself, "Tony Gwynn forgot his jersey at the hotel for a spring training game and had to hit in mine- his first at bat." Kind of anti-climactic but I suppose it's nice to know that even the greatest amongst us screw up now and then. I can only hope that twenty years from now some punk won't be writing about a picture of something stupid I've done.