Cardboard Corner: I Hate This Card So Much

Share All sharing options for: Cardboard Corner: I Hate This Card So Much

I had never seen this card before Wednesday and I soon as I laid my eyes on it I knew I had to buy it just to ridicule it.

One of my least favorite things about the year 1999- in addition to all the Party Like It's 1999 "jokes"- was how seemingly everyone, from late night hosts to that one dipshit you always tried to avoid at work, had some idiotic joke or pun about "Y2K". Well, the jackasses at Upper Deck were no different. In this case, Tony had just passed the 3000 hit total so they saw fit to try to be hip or what the hell ever and dropped this "Why 3K?" abomination on us.

I cannot even begin to understand the thought process that thought this was anything close to a good idea. The jump from Y2K to Y3K is enough of a stretch without getting even more mock-clever and turning it into a question. A pointless question. A pointless question which never gets answered. Oh, but wait, maybe they tell us why 3K on the back... 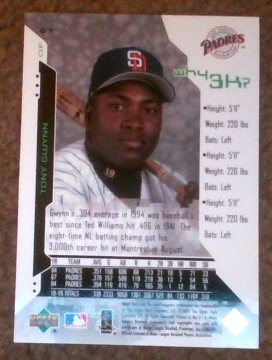 Am I being irrational here or does anyone else find this particularly galling, even 13 years later? Not only do I think that every single person involved in the creative and approval processes that went into this are complete nimrods, I feel personally offended because marketing garbage like this is insulting to my and every other collector's intelligence. No wonder Upper Deck went bankrupt.