This started life as a comment a few hours ago back when we were led to believe progress was being made on MLB's Collective Bargaining Agreement. Now that we know that was not only not the case, but that the two sides have broken off negotiations and flow back to their respective corners, and as a result we're looking at some form of protracted lockout I thought I'd share some ready alternatives for us all to enjoy in the absence of Padres baseball both locally and beyond.

For those local in San Diego I spent most of the last two weekends watching college ball locally. We're very lucky here in San Diego to have 3 Division 1 and 2 Division two programs to watch, four of which have very nice ballparks that are on par, if smaller than, Petco for design and care put into them. For those that don't know your options are San Diego State's Aztecs, University of San Diego's Toreros, UC San Diego's Tritons, Point Loma Nazarene's Sea Lions, and CSU San Marcos' Cougars. I've already taken in games at all but CSU San Marcos this spring and I intend to rectify that last one shortly but will share what I know about all 5 below. 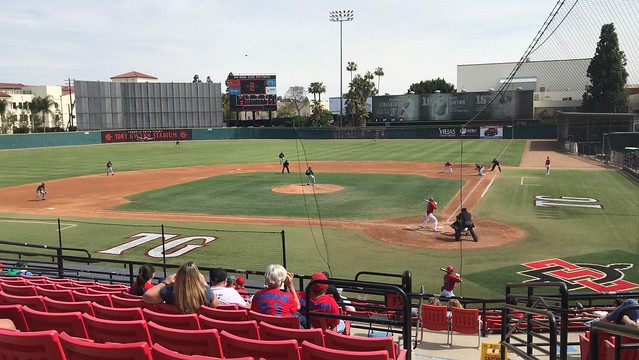 Tony Gwynn Stadium at SDSU is practically a shrine to the greatest Padre of all time, and while the oldest of the 3 D1 parks it's also the biggest having opened in the late 90's. The gameday experience is very good however, with the stadium being IMO the closest we have locally to actual spring training. Food is decent and while they don't have a big beer selection, the beers are big and come in a really cool aluminum cup for $14 bucks. They also have a merch stand for most SDSU games that has all manner of stuff from caps, to jerseys, to sweatshirt. A recent great pickup I got was an actual T. Gwynn jersey t-shirt as the Tony Gwynn Legacy tournament was played this weekend and SDSU's coach had all the players, SDSU and the visiting teams, playing in #19 jerseys with T. Gwynn's name on the back (think Jackie Robinson Day but for Tony). It was something to see let me tell you. As for price of admission tickets to SDSU games are cheap, $8 for adults, $5 for kids and they are GA so sit where you like other than the small "season ticket section" low down behind the plate and the skyboxes. About 90's of the seats are tip up with the exception of two sections down each baseline which are actual bleacher sections which is a cool novelty. Parking is a couple of bucks an hour in the Sports Deck garage next to Viejas Stadium or the Trolley runs right to SDSU's campus and is a short walk to the ballpark. The Aztecs are 3-5 on the year and play as you'd expect in the Mountain West Conference. 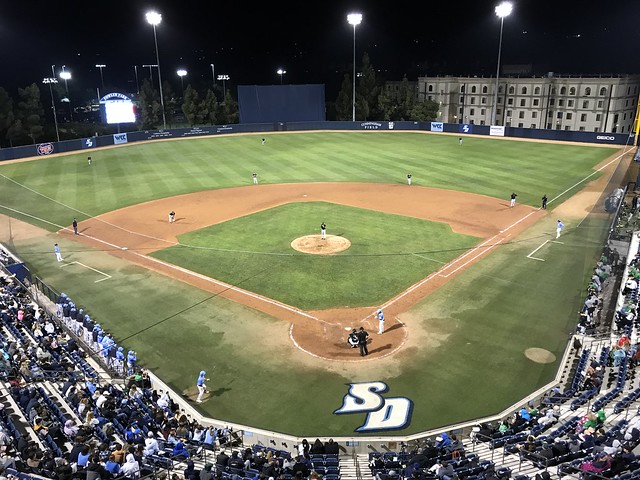 Fowler Park at University of San Diego, named for the Padres part owner, is probably the nicest of the local university ballparks. Helps it's only 10 years old and no expense was spared in its construction. If SDSU is the most akin to Spring Training, USD is most akin to going to a game at Petco or a true MiLB park. It's nice enough that the Padres used it for some Spring Training games it's first year of operation. It has a top side concourse with field views, good food, good beer selection, a real merch booth with all the usual things like caps and foam fingers, and is the only stadium to feature a true jumbotron. If you have kids it also is the only one with a kids field akin to Petco's PATP down the 3rd base line where I tend to take in games while letting the kids throw t-balls around. The stadium also uniquely has an elevated standing room area above the press box and skyboxes (yes it also has skyboxes) in the entry plaza that gives you the only college ballpark view I know that is like sitting on the second or third deck of an MLB park like Petco thanks to Fowler Park having been built into a notch in an actual cliff. Tickets are $10 for adults, $5 for kids, and if assigned seats are your thing they got you covered and all seats are nice big tip up seats with cupholders (the one thing SDSU is sorely lacking). Parking is a couple of bucks an hour in the garage across from Torero Stadium and it's a short walk past Jenny Craig Pavilion to find the ballpark. If public transit is your thing, there is a station at the base of the hill USD sits on above Mission Valley at Morena that is at a distant but doable walk. The Toreros are 4-3 so far this season and play in the West Coast Conference. 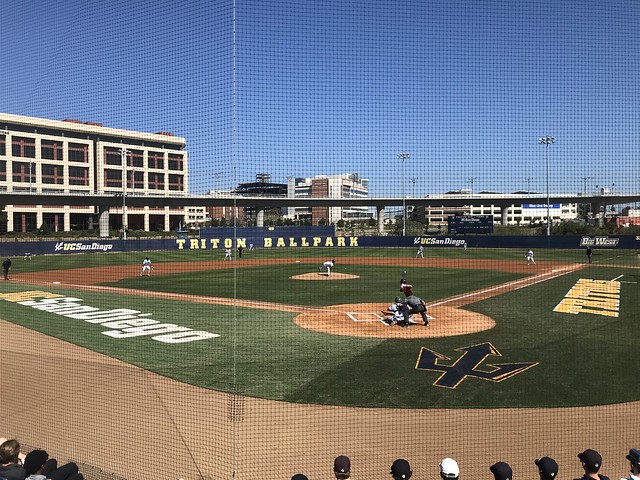 Triton Ballpark at UCSD, San Diego's newest Division 1 program, is also the region's newest ballpark having opened in 2015. It's also the smallest of the D1 parks which makes it just that much more intimate. Unlike the previously mentioned parks which thanks to the protective netting and a more professional leaning atmosphere are just that, there is not really any separation between the fans and players at Triton Park with a grass area down the RF line where the players walk between the bullpen and dugout and interaction is possible even during games. Fans can even walk right up to the field side fence at most games or watch closely while the starting pitcher gets his post game treatments from the medical staff. Downside, particularly during this COVID wind down is they do not serve food or drink at Triton Ballpark, but tickets are the cheapest at $6 for adults, $5 for kids. All the seats are tip up and Triton Ballpark, because it was built a bit cheaper than the previous two parks, has aluminum flooring in the otherwise concrete stands which can make for some fun and loud stomping opportunities. The parking lot for the ballpark is a couple of bucks except Sundays right across from Scripps La Jolla or the new Blue Line trolley runs to Scripps La Jolla too. The Tritons are 6-3 on the season in their second D1 campaign thus far in the Big West (where they play the likes of Hawaii and Long Beach State). 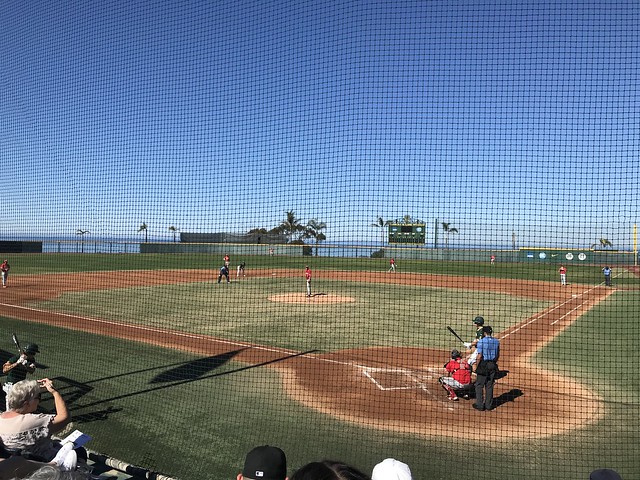 Carroll B. Land Stadium at PLNU

Carroll B. Land Stadium at Point Loma Nazarene is the best Division 2 entry locally. It's a bit smaller than the D1 parks, and lacks lights so all games are day games. But you will not find a better view in all of baseball (potentially anywhere on Earth). PLNU's games are played on the bluffs above the Pacific just south of Sunset Cliffs and the views are nothing short of spectacular. That they're playing baseball while you watch the views are just a bonus. There is a snack shack window selling some basic stuff down the right field line and you can bring in your own food. The Sea Lions have been on fire this year holding a 13-1 record so far in the PacWest conference. And tickets are $10 for adults, $5 for kids, and seats are assigned if that's something you like. There's also a nice grass area down the RF line fans can sit on with blankets ala spring training style. Parking is free at the city lot just past the ballpark on the downhill side of the PLNU campus. "America's Most Scenic Ballpark" was actually featured in an article by MLB.com yesterday highlighting it's many virtues https://www.mlb.com/news/the-most-beautiful-baseball-field.

Last for university ball is Cal State San Marcos if you're in North County. The Cougars CSUSM Baseball Field is pretty basic, bring a lawn chair or they have a basic bleacher, but admission is the right price... free. They play in the CCAA of D2 and are 4-6 on the season. Sadly I don't have more at this point about them but did I mention, "free". 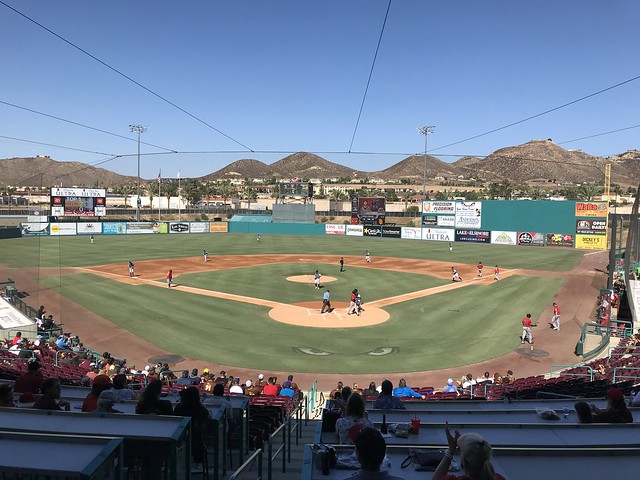 Also keep in mind that MiLB will be starting on time regardless of MLB's stupidity. The Padres Single-A affiliate the Lake Elsinore Storm just up the 15 will begin play on April 8 away at Inland Empire and at home April 12 at the Lake Elsinore Diamond against Visalia regardless of the status of the MLB lockout. And their games are ALWAYS a good time and the Diamond is a great little ballpark with an outstanding food and beer selection and some of the best mascots and between innings shenanigans in sports. Their ballpark features a spring training style grass hill in right field, a kid zone in right, a multi level party deck, outdoor bark, indoor bar and grill in left (the burger is outstanding as is the beer selection) with multiple TVs showing other sporting event. The only real downside is the heat as the season goes on as you'd expect in the IE with day time temps in the triple digits not uncommon. Luckily most games are after dark and the restaurant has AC and the party deck has plenty of mist fans. Tickets start at $8 and top out at $25 so like the NCAA guys, it's still more than family friendly on pricing and I can't recommend it enough. 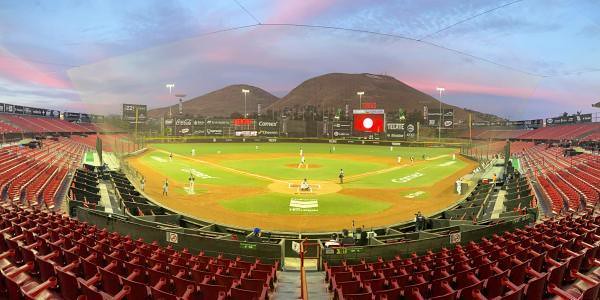 Lastly locally there is the cross border option for those willing to make a visit to San Diego's sister city Tijuana. The Tijuana Toros of the Liga Mexicana de Béisbol will begin their season on time April 21 against the Diablo Rojos del Mexico defending their 2021 League Title (yes they also have won their league multiple times in 2017 and last year, unlike the Padres). The Toros play their games at the 14,000 seat Estadio Chevron. I've never had the opportunity to take in one of their games on their home turf, though they did visit Petco a few years ago for an exhibition. From what I understand the games are a lot of fun with a definite Mexican flair in some things like the mascots. They also have the benefit I understand of some decidedly Mexican pricing on the food and drink with beer to the tune of a pair of beers for like $2 or thereabouts?