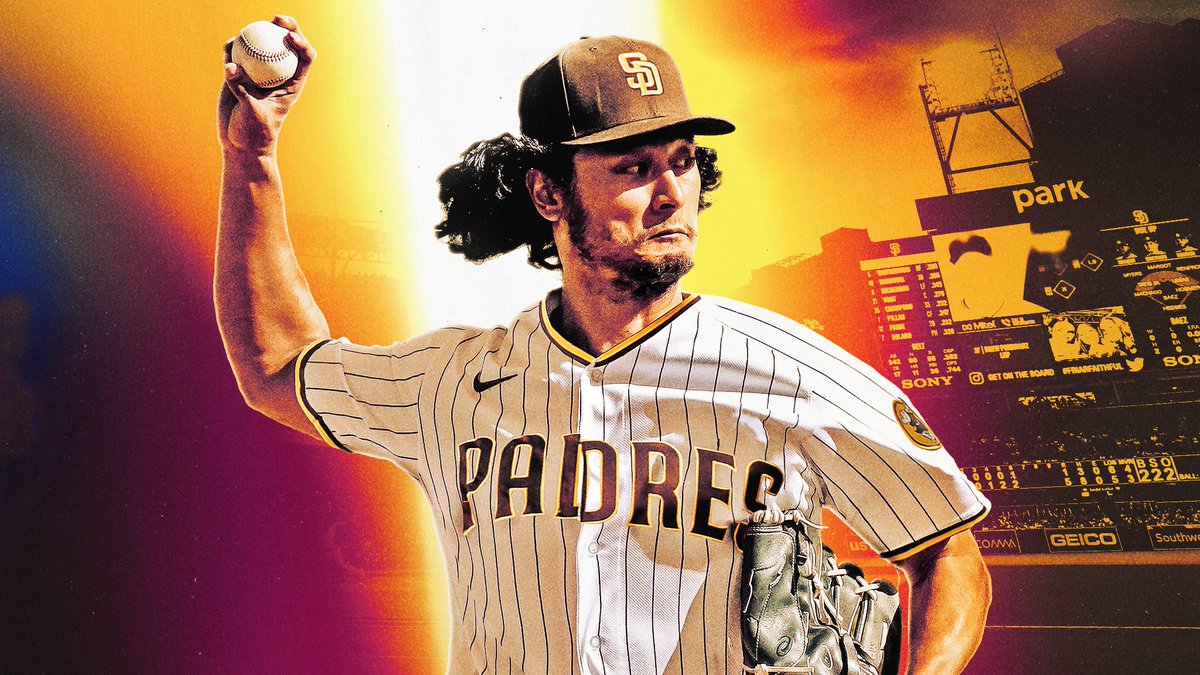 Back and Better Than Ever

About two years ago today, Yu Darvish was looking like a pitcher who could be a contractual albatross for the Cubs. The 2018 season was a season with a serious injury and incredibly high walk rates, two terrible signs for aging pitchers. Darvish rebounded in the 2019 season with a good, not great 178.2 innings of 3.98 ERA ball. But while those numbers weren’t spectacular considering the price the Cubs were paying for his services, the signs were there that Darvish was ready to rebound. He dropped his walk rate to below his career average, increased his strikeout rate to above his career average, and gave up a home run to fly ball rate of 22.8% (a rate that was so far above his average that there was almost no way it would continue).

In 2020, Darvish finished second in the Cy Young award race (he likely should have finished first when the difficulty of opponent Trevor Bauer had to face is taken into account) with a 2.01 ERA and 0.96 WHIP. He also had HR/FB, BB%, and LOB% rates that are probably unsustainable, but I find it likely that Darvish is probably somewhere between his 2019 and 2020 numbers… which is to say a VERY good pitcher.

While his production will be the aspect of his game that we care about most as Padres fans, let’s not forget that baseball is a form of entertainment. Yu Darvish is going to be VERY entertaining to watch. He throws ~11 distinct pitches, throws them in unorthodox counts AND pitched at least 7.0 innings in half of his starts in 2020. If you read my article on Blake Snell, this one will follow a similar pattern but it is much more confusing because Darvish has an eclectic repertoire, so stay focused!

To get started, let's look at his pitch percentages, their location and when he uses each pitch in the count... 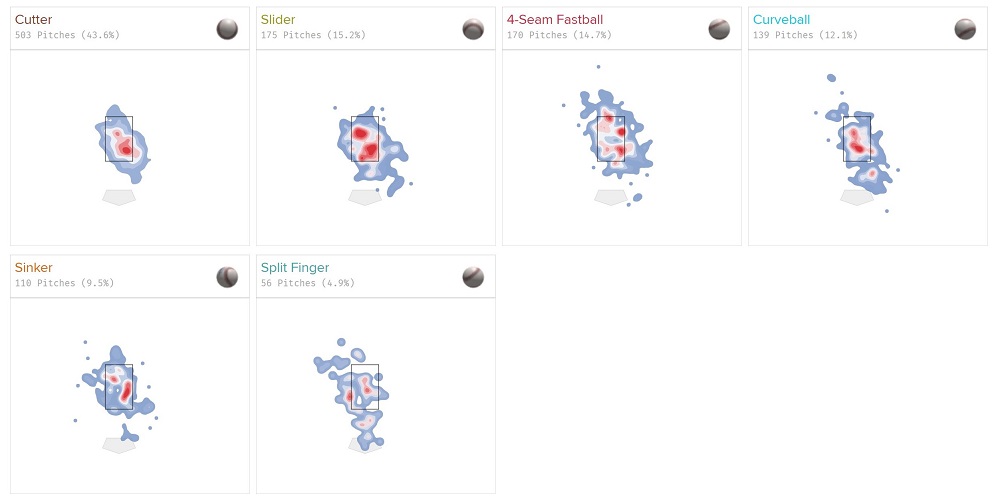 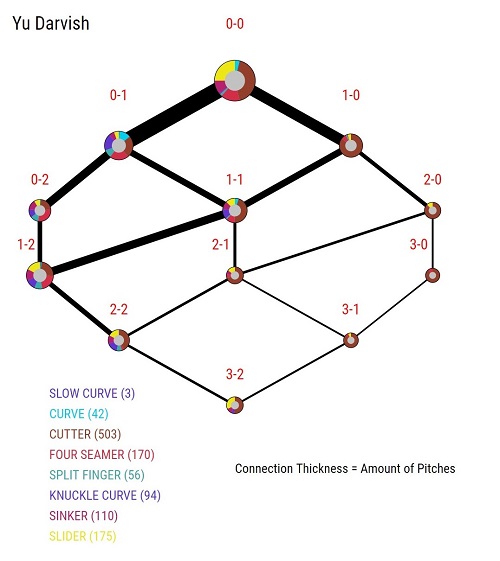 I’m going to start with the cutter because Yu Darvish uses his cutter in the situations in which most pitchers use their 4-seam fastball, that is to say on 0-0 counts and when behind in the count. But because nothing is easy when it comes to Darvish’s repertoire, he actually has at least two distinct cutters. Darvish throws a both a soft cutter with more movement and a hard cutter with more velocity and will also throw his soft cutter slightly harder and his hard cutter slightly softer in order to essentially blur the edges on which pitch is which. It seems as though he throws his soft cutter much more often (closer to 30%+ of the time) than he does his hard cutter, but the data is tough to analyze based on his ability to change speeds and movement with both pitches.

Traditionally pitchers tend to use the 4-seam fastball early in the count to get ahead of the batter and when behind in the count in order to avoid walks. But once again, Darvish is anything but traditional. Darvish actually uses his 4-seam fastball most often when ahead in the count, especially 0-2 and 1-2 counts. There is a good rationale behind this as Darvish’s 4-seam fastball generated the highest whiff % (42.3%) of all of his pitches in 2020. Considering the litany of offspeed offerings that Darvish has to play with on an 0-2 count, it must be difficult for a batter to stay on a 97 mph fastball and avoid the strikeout.

This may be the least difficult pitch to interpret in Darvish’s arsenal. It’s simply a very nasty slider and arguably his best pitch. Darvish varies the speed with his slider to make it more of a slurve at times, but he surprisingly uses it in a typical manner (i.e. when he is 0-0 in the count or when he is ahead in order to get a punchout).

Yu Darvish throws a knuckle curve at about 81-83 mph, a 12-6 curve at 74-81 mph and an eephus that comes in between 64-71 mph. Over the course of his career, Darvish’s curveball has been his second-best pitch in terms of run prevention, so it’s not surprising that his curveball usage increased from closer to the 5% range for much of his career to 11.8% in 2020. Knowing Larry Rothschild, I wouldn’t be surprised if his curveball and slider usage increased even further in 2021 (Dinelson Lamet, whose best pitch is also his slider, increased his slider % from 43.9% to 53.4% in his first year under Rothschild).

While this pitch is quite nasty when you watch it, it is also the pitch that tends to generate by far the lowest whiff-rate of all of his pitches. Pitches that are put in play more often tend to have poorer results in today’s baseball, so it in not surprising that he has dropped his usage from about 20% to about 10% over the last few years. I would not be surprised to see Darvish drop this pitch’s usage even further in 2021. That being said, it’s always nice to have a nasty 2-seamer in your arsenal when you’re hunting a double-play ball or trying to catch a lefty looking over the inside part of the plate.

Hopefully Kirby Yates signs with the Padres and returns to the elite closer he was prior to his injury in 2020. But also hopefully Kirby Yates signs with the Padres to convince Yu Darvish to throw his splitter more often. Not only is Darvish’s splitter fun to watch, but it has also garnered tremendous results over the past two years. The only problem is that Darvish only throws this incredibly nasty pitch 5% of the time. The fact that Darvish has a pitch this filthy (it generated a .147 wOBA in 2020) and only throws it 5% of the time is the perfect illustration of the embarrassment of riches Darvish has in his arsenal.

Darvish also has a more traditional changeup but he almost never uses the pitch, so I don’t have much to say about it. If you can spot it while he’s pitching this season, I’ll award you three points!

In case you’ve been counting, we have now been through 10 pitches (if you count his slider and slurve as only one pitch). But what good is a repertoire with only 10 pitches in it? Darvish has been experimenting with a new pitch that he calls the "supreme." While he has many separate pitches that have distinct glove-side run (cutters/sliders/curveballs), Darvish clearly wanted a third pitch with arm-side run that is distinct from his 2-seamer and splitter. In order to do this, he created a splitter/2-seam hybrid of sorts. What a splitter is to a forkball, his supreme is to a splitter (i.e. less width on his fingers) and it is held in a manner somewhat reminiscent to a two-seam fastball. The result is a pitch that is either a hard splitter or a soft two-seamer. The distinction is going to be hard to find on tape, but here he is throwing it in warm-ups.

Let's just put together a little prayer for the health of our staff because if Blake Snell, Yu Darvish and Dinelson Lamet are able to make a start every 5th day, we are going to be treated to some extraordinary pitching talent in 2021. I can't wait!