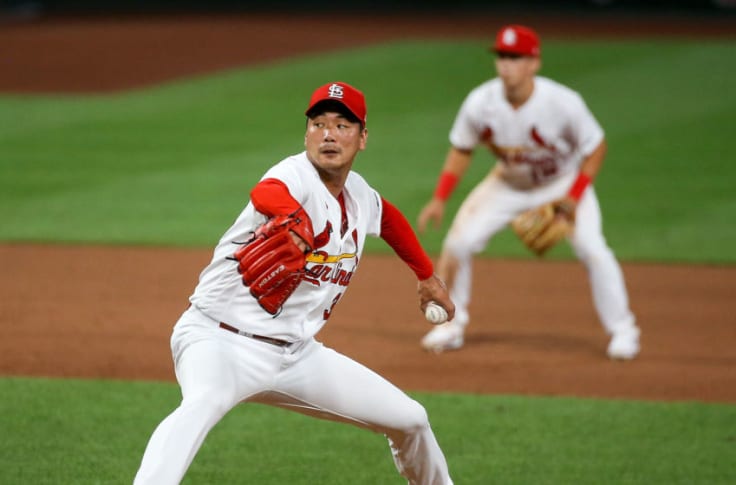 The Cardinals have made somewhat of a surprise decision and are starting Kwang Hyun Kim in game one of their series against us on Wednesday. The 32-year-old Kim is only 8 games (and 7 starts) into his Major League career and will thus present as somewhat of an unknown commodity to the Padres lineup. So far, the left-hander is sporting a tremendous 1.62 ERA and 1.03 WHIP. Interestingly, his only non-start was when he recorded a save (while yielding 2 runs, 1 earned) on opening day when he was presumed to be the Cardinals closer.

As seen below, Kim relies primarily on a four-seam fastball and slider, but keeps hitters off-balance with a curveball and changeup that do not seem to be particularly well-commanded (the curveball is yielding an .875 slugging percentage against!). Kim has an average fastball speed of only 89.9 mph and a strikeout rate of only 5.54k/9 and appears to rely on a good ground ball rate (50%) and low home run rate (only 9.1% of all fly balls). Unsurprisingly, for a pitcher with an extremely low strike-out rate, peripherals think he may be out-performing his abilities as he has a FIP of 3.88 and an xFIP of 4.52. He also has an absurdly low BABIP at .217.

Kim has also pitched 7 of his 8 games against either Pittsburg, Milwaukee or Cincinnati (91, 89 and 73 wRC+ respectively, ranking 23rd, 25th and 29th overall), and in his one outing against a seemingly decent-hitting team (the Cubs, although they too have a 91 wRC+ and a 73 wRC+ against LHPs) he gave up 3 walks and a run with only one strikeout in 3.2 innings. The Padres have performed much worse against LHPs this year (106 wRC+ versus a 119 wRC+) but even considering our relative deficit, Kim has not faced an offense nearly as competent as ours all season long. I wouldn't be surprised if he forces some ground outs and weak contact his first time through the lineup, but I have high hopes that FTJ, Machado, Myers et al will get to him if they trot him out there a second time through the order.

He almost seems like a relic of the past as a soft-tossing lefty who doesn't avoid contact but makes sure that the contact is soft and is sure to prevent barrels. We might have to rely more on station-to-station baseball than we are used to against Kim. 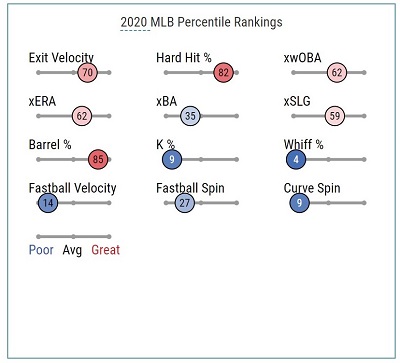 His low k-rates make for some fairly boring highlights that all look pretty much like what you see below...

Kim has had such little experience in the MLB to date, that it's somewhat difficult to tease apart his splits. That being said, it appears as though RHHs may present more of a challenge to him (as seen below).

I think that we can expect to see a lineup very similar to this one that we've been using against many LHPs recently. 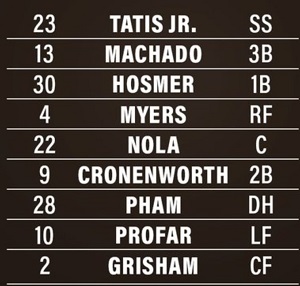 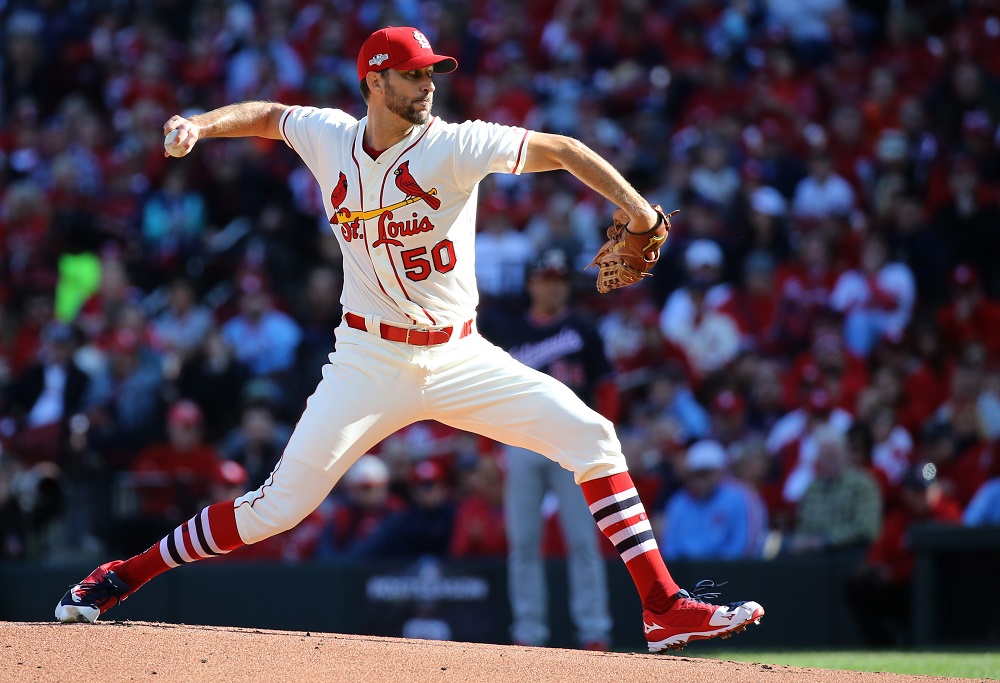 The Padres are set to face a resurgent 39-year-old Adam Wainwright in game 2 of the Wild Card Series. The only thing that I find more amazing than the fact that it’s been 14 years (!!!) since we last played in the playoffs is that we are going to be facing the same pitcher who recorded the final 3 outs of that series against us and that he’s been on the Cardinals the entire time since. Wainwright pitched to a 3.15 ERA and 1.05 WHIP with a 7.4 K/9 in 2020, but even more than Kim before him, after digging into the numbers you are much less inclined to ask "just how good was Wainwright in 2020?" and much more inclined to ask "just how bad were the hitters in the Central this year?"

Wainwright appears to be the exact same pitcher he’s been in the past five years, which is impressive in terms of longevity, but certainly not scary. His FIPs the past 5 years (starting in 2016) have been: 3.93, 4.29, 4.28, 4.36, and 4.11. His ERAs over that same span have been 4.62, 5.11, 4.46, 4.19 and 3.15. When investigating those numbers, it’s easy to see that his success in 2020 looks a lot like an aberration. He has a worse ground ball rate in 2020 but also has a slightly lower walk rate and despite having the same exit velocities, he has a much lower BABIP (probably what’s dramatically lowering his ERA so much this year). When looking at his numbers, he’s essentially performing like a more experienced Joey Lucchesi. His experience may keep his team in the game in game 2, but I certainly wouldn’t be nervous to face him with our lineup (especially against RHPs). Looking at all the blue on his Statcast percentiles should tell you all you need to know. 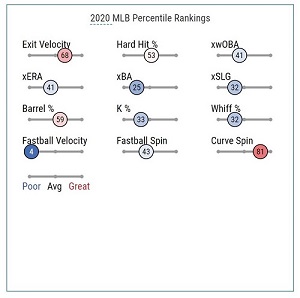 Alright, now let’s dig into his arsenal (as seen above), because it’s quite interesting. As you can see, the pitch that Wainwright throws most often is a curveball! He also mixes in three different fastballs (which tend to vary in speed between 84-91 mph) and will rarely sport a changeup. Despite throwing it so often, he has not given up a home run on his curveball this year and it’s really the only pitch that has been garnering good results for him. The Padres have been a top 10 team against the curveball so far this year, and considering that he’ll be throwing some version of a fastball about 60% of the time and our numbers against both fastballs and RHPs (data for these categories considered in the Flaherty section), he actually seems like a quite decent matchup for us. 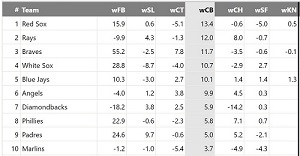 Here is Wainwright breaking off a nasty curveball...

Lastly, let's look into Wainwright's splits and investigate what our lineup might look like in game 2. Wainwright has always performed slightly more poorly against LHHs and despite the dramatic change in repertoire over the years (he used to rely much more heavily on a 4-seam fastball, slider and change and has since exchanged the slider for a cutter, essentially dropped the changeup and dramatically increased his curveball usage), you can see below that he still seems to prefer facing same-sided foes. This is a matchup that could favor Moreland over Pham for the DH spot. As such, you may see a lineup that is a slight deviation from the game 1 lineup (Nola hits RHPs very well, so I think he'll be essentially an everyday catcher during the playoffs).

I think this lineup is probably the closest one we've had so far this season to what we might see Thursday, but I think Profar will likely start over Pham and bat slightly lower in the lineup than you see Pham hitting here. 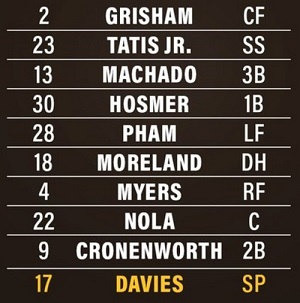 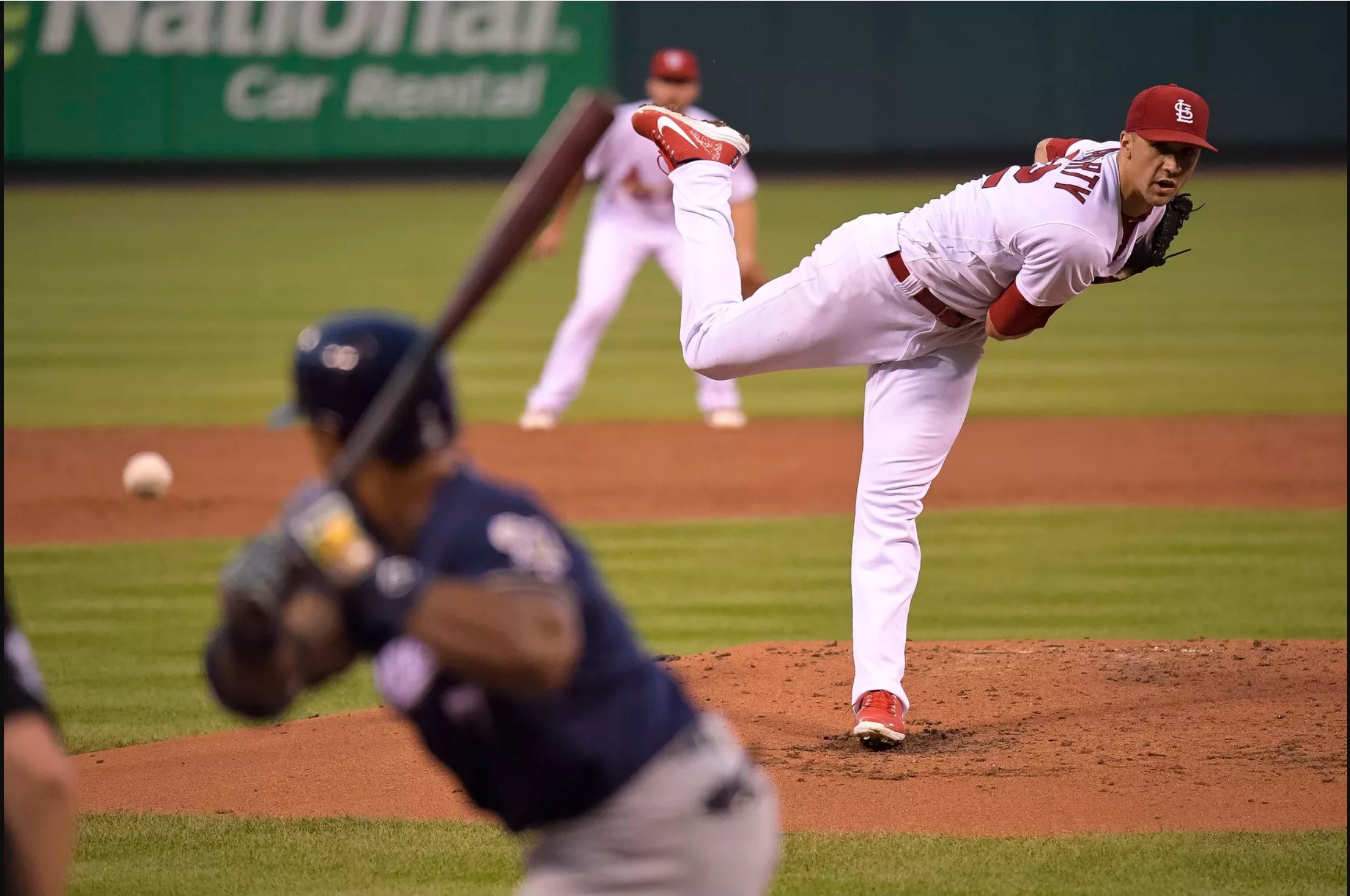 24-year-old Jack Flaherty will be saved for a hypothetical game 3 and he would potentially come into the matchup sporting a 4.91 ERA and 1.21 WHIP so far in 2020. The Cardinals will likely be hoping that the 2019 version of Flaherty, he of the 2.75 ERA, 0.97 WHIP and 4th place Cy Young finish, will be the version that steps onto the rubber. Not much seems to have changed in his peripherals this year, it simply seems as though he may have been somewhat lucky with left on base and home runs per fly ball percentages last year and is similarly unlucky in those categories this year. His walk rate has also been much worse, so hopefully our patient approach will pay dividends in that respect.

As you can see below, Jack Flaherty relies primarily on a fastball/slider combination while occasionally sprinkling in a knuckle curve (almost exclusively early in the count). He’ll also exchange velocity for arm-side run on a sinker that he appears to only throw down and away from lefties and down and in on righties. His fastball will usually sit ~94 mph, while his slider will run ~84 mph.

And here's the fastball/curveball tunnel that he's likely to feature early in counts... 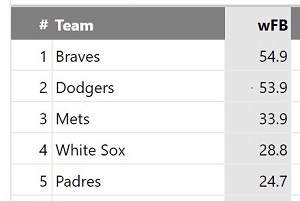 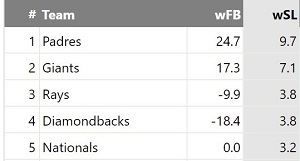 Even in a down year, Flaherty has shown a good whiff rate and strikeout percentage, but if we can attack his low spin-rate 94.0 mph fastball, we should be able to get to him (he's had that pitch hit quite a bit this year). The media and Cardinals fans seem to be displaying faux confidence in their "big-game pitcher." But look at his Chris Paddack-like September game log and his Statcast peripherals and tell me that you're intimidated... 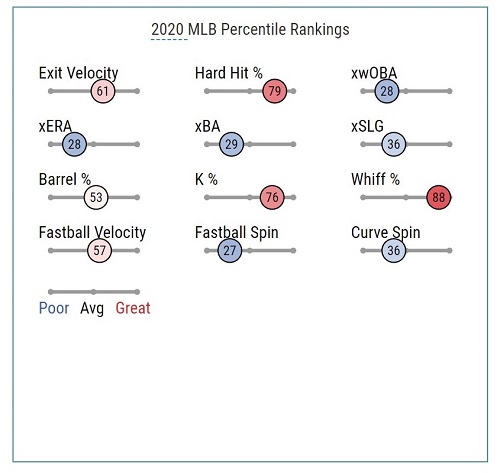 As can be seen below, Flaherty presents with an only modest advantage against RHHs when compared to LHHs. Flaherty has actually seen more lefties than righties over the course of his career, which would indicate that most of the RHH's he's faced have been each team's best RHHs (the FTJ/Machado-type RHHs that you play no matter what), so a platoon advantage may actually be more of an advantage than the numbers may indicate. If Pham is sore or injured from last night, sitting him makes some sense... but after his hot start to this series, it may come down to a very difficult choice between a scalding hot Jurickson Profar and a veteran Mitch Moreland who went 1-2 with a run scored in last night's game.