This journey has been a long time coming. For the traveling jersey it began in February 2012. For me, it began in 1989 when I attended my first Padres game and fell in love with baseball. For Trevor, well, it began when he first started playing baseball in Orange County. I started imagining this particular trip back when Trevor was still playing and it was clear that he would be retiring sometime in the next few years and after five years, clearly, he would be inducted into the Hall of Fame. So, this would put us about 8 or 9 years out since it turned out that baseball, stupidly, did not induct Trevor on the first ballot. I went online and found an authentic, road sand Hoffman jersey on Craigslist and bought it so I would have it to wear to the induction. I would also tell anyone who would listen over the next 9 years or so that I had the jersey and would wear it when Trevor finally made his mark in Cooperstown. Suffice it to say, I had this on my radar. 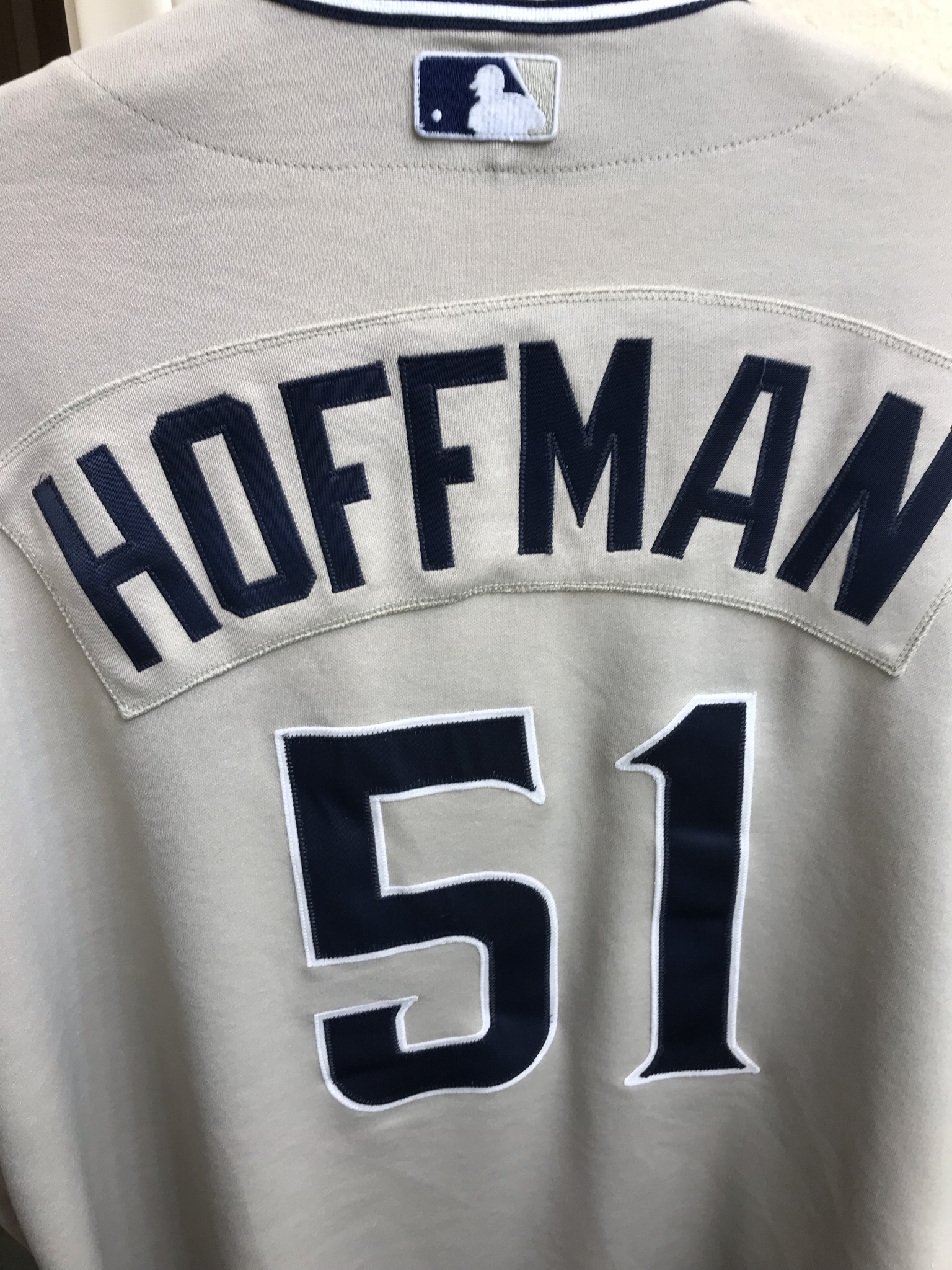 Our family has a place on the St. Lawrence River in the Thousand Islands region of New York’s "North Country" which is what the region north of "Upstate" calls itself. My great-grandfather had the foresight to buy this place in the 1930s when property was dirt cheap in the Great Depression and although it does not make my family in any way wealthy, it does give us all an amazing place to travel to every summer. It also has the advantage of putting us just a little less than four hours from Cooperstown. My sister and I had gone to Tony’s induction in 2007 and it was, of course, amazing. Once the Hall of Fame announced the date of this year’s induction, I blocked the week before and after as vacation with my employer over a year in advance. Nothing was going to stop me from being at this ceremony.

As the date approached the necessary arrangements were made. Plane tickets to the River were purchased for the entire family. Five of us would be going. Rooms were reserved in nearby Utica for the night before so we could get all but an hour of the driving out of the way on Saturday. I even learned that the Traveling Jersey was out of mothballs and ready to hit the road again so after a few emails with Weezer Padres superfan Jodes Paranal (Thanks Jodes!) we had that squared away as well. My road sand jersey would have to share time with the most famous, traveled, unique Padres jersey of them all.

Then a wrinkle hit. My employer had been struggling a bit over the previous couple of years and just after the 4th of July closed the business, laying me and all of my coworkers off.

I had been with this employer for almost 22 years so I can’t say it was a complete surprise but the timing could have been better. So, go, don’t go? Are you crazy? Trevor Hoffman is being inducted into the Baseball Hall of Fame, OF COURSE I’m going! I’ll find another job when I get back.

On Friday, July 20th we boarded the red-eye from San Diego to Syracuse NY through Philadelphia and our odyssey had begun. Traveling from the west-coast to the east-coast can be a grind. There are two strategies, take the very first flight in the morning and arrive in the east around dinner time, or catch the last flight of the day and arrive just after breakfast. Traveling on a flight from California that leaves in the afternoon is crazy talk, you arrive around midnight and guarantee that you will be up all night unable to sleep and your internal clock will be off for at least 3 days. Taking the red-eye is a pain in the tail, when you get there you are exhausted, but the sun is up so you stay awake and push through to an early east-coast bed time, go to sleep and, Shazam! you are on Eastern time in one day. We landed in Syracuse at 9 in morning. Had a quick breakfast and drove the two hours to the St. Lawrence River. The Traveling Jersey and my grandson both had an amazing time there. 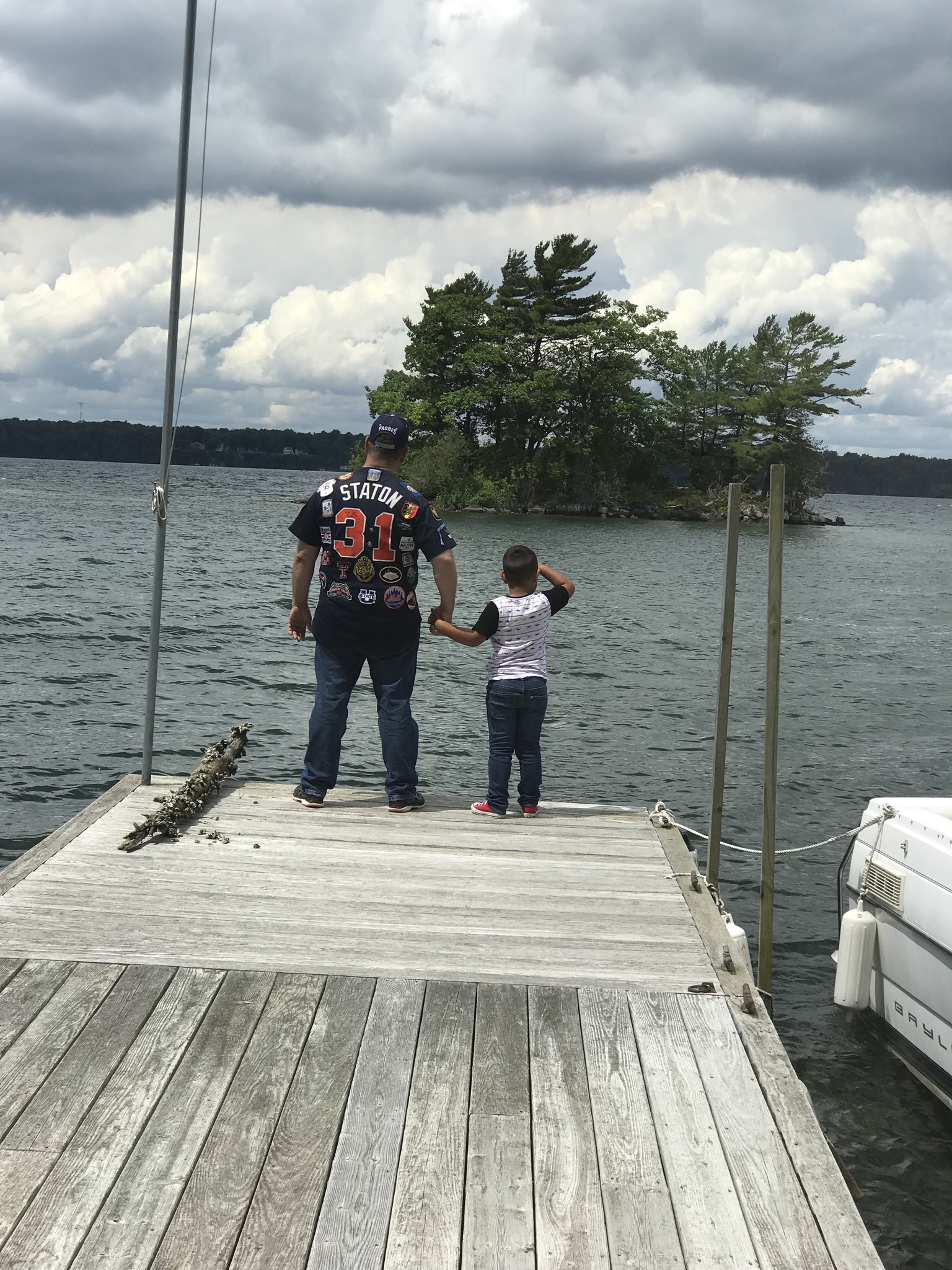 Induction Day seemed to come at light speed. Before we knew it, it was Saturday afternoon and time to pile into the van and drive down to Utica where we would have dinner and hit the sack. Sleeping was more of a theoretical exercise than an actual activity. I think I may have nodded off between 4 and 5 in the morning for an 8am wake-up call.

It was a beautiful, sunny day in central New York on Induction Day. The sky was full of the white, puffy clouds you see anywhere else in the country but almost never see in San Diego. There had been a lot of rain throughout the east the entire week prior to that weekend but no rain was forecast for Sunday, the temperature was in the low 80’s. Cooperstown is nestled amongst what the folks in the East call mountains and we would call rolling hills. Those hills are the lush green color of a bowl of shamrocks, precisely what you would expect to find during the summer in a place where it rains more than 11 inches in a year. A sharp contrast to the dark, dreary, freezing cold that these same "mountains" can look forward to in just four months’ time. As Cooperstown is a very small town, just 2,200 residents, all roads going there are two lanes, one coming, one going, and they are framed by farmers’ fields and wooded forests. It truly is a beautiful drive.

Parking for Induction Day is a special challenge. I had elected to pay $30 to park in the Babe Ruth lot which comes with a free shuttle to the ceremony rather than parking in one of the three free municipal parking areas in the village which are connected to shuttles that are only $2 but since they have to go through the village can get caught up in the congestion. I was planning on a quick getaway as soon as Trevor had completed his remarks and the Babe Ruth lot would help me do that. Calling it a "lot" is a bit of an overstatement, it is a field, a big one that you have to walk across to get to the school bus that takes you to the Clarks Sports Center. 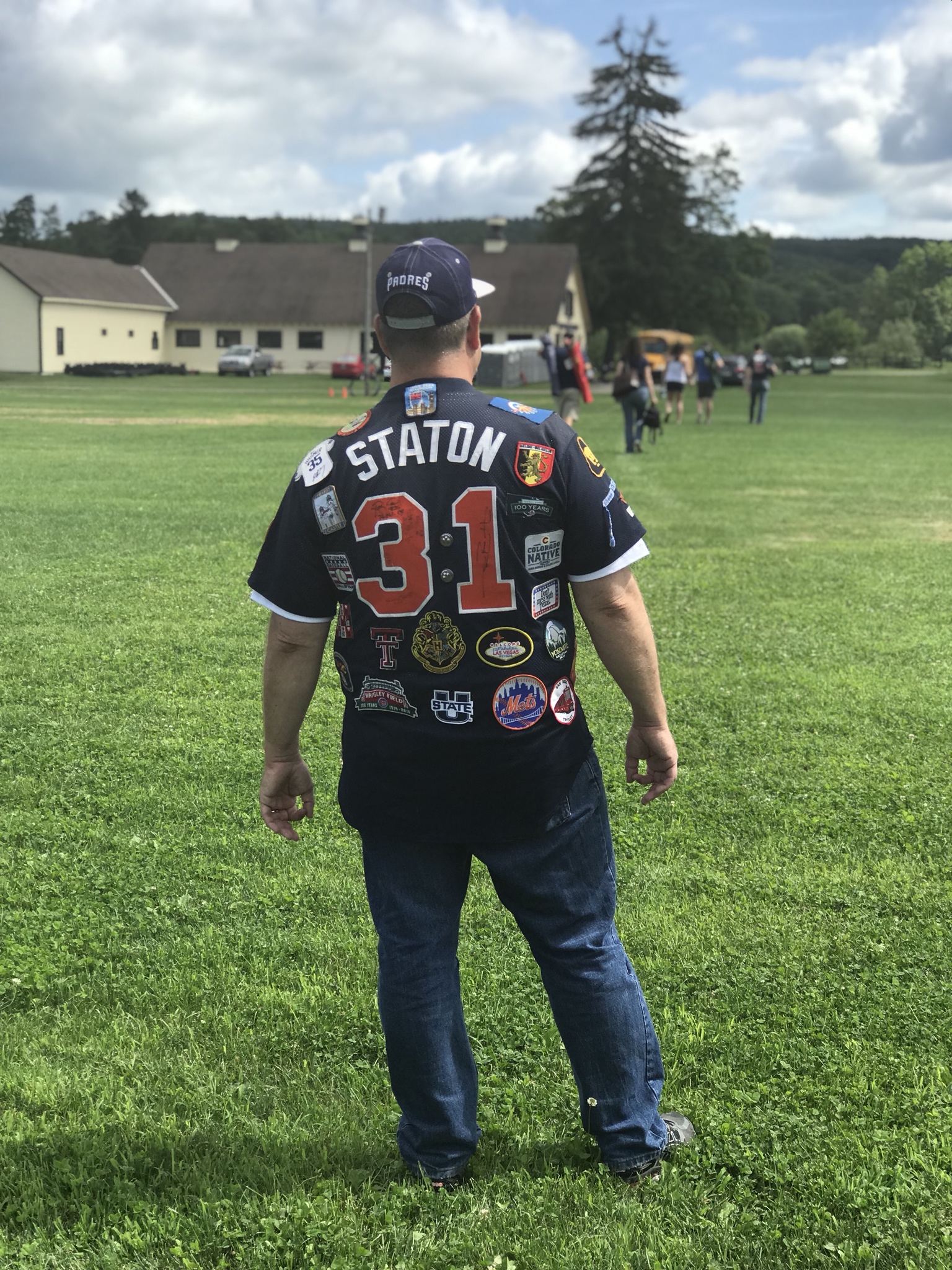 The ceremony itself is also on a field outside the Clark Sports Complex. The mass of humanity that unites there is a big part of the fun. Everyone there loves baseball. Fans of each of the teams represented by the inductees are represented in force. As you would expect, the place was lousy with fans from the teams from the East, particularly Braves, Phillies, Indians, White Sox and Tigers fans (among others) for Chipper Jones, Jim Thome, Jack Morris and native San Diegan but lifetime Tiger, Alan Trammell. But there also were a decent number of Angels fans there in support of Vladimir Guerrero and I was pleased to see a sprinkle of Expos jerseys that also had come out for Vlad. 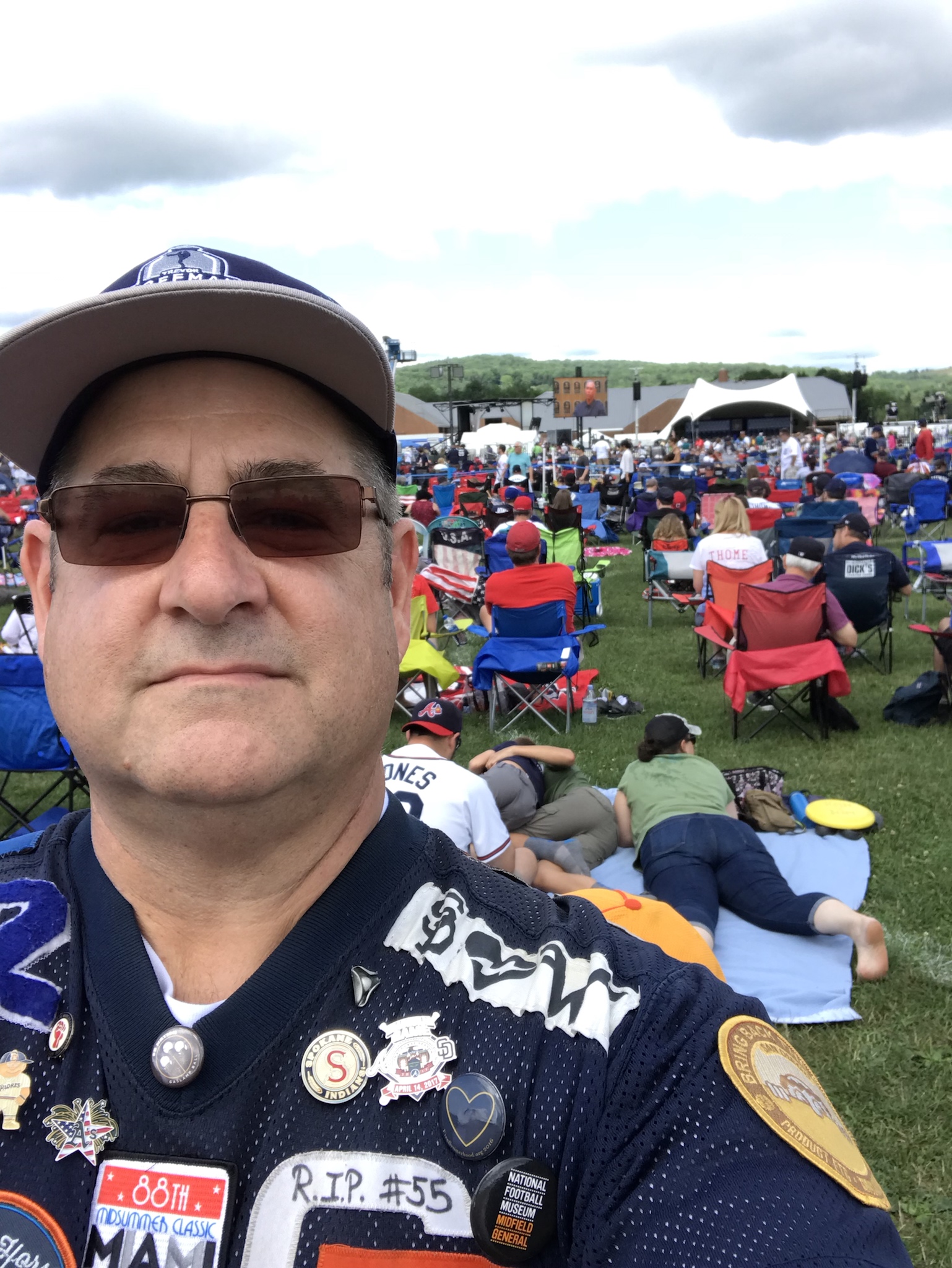 Since San Diego is the club that is physically furthest from Cooperstown you would expect them to have the smallest contingency on the field but the Friar Faithful were in fact there in force and made their presence known by forming a motley scrum in the center of everything and commencing to shout, chant, sing, and just generally behave in a way that should make everyone in Padre Land proud. 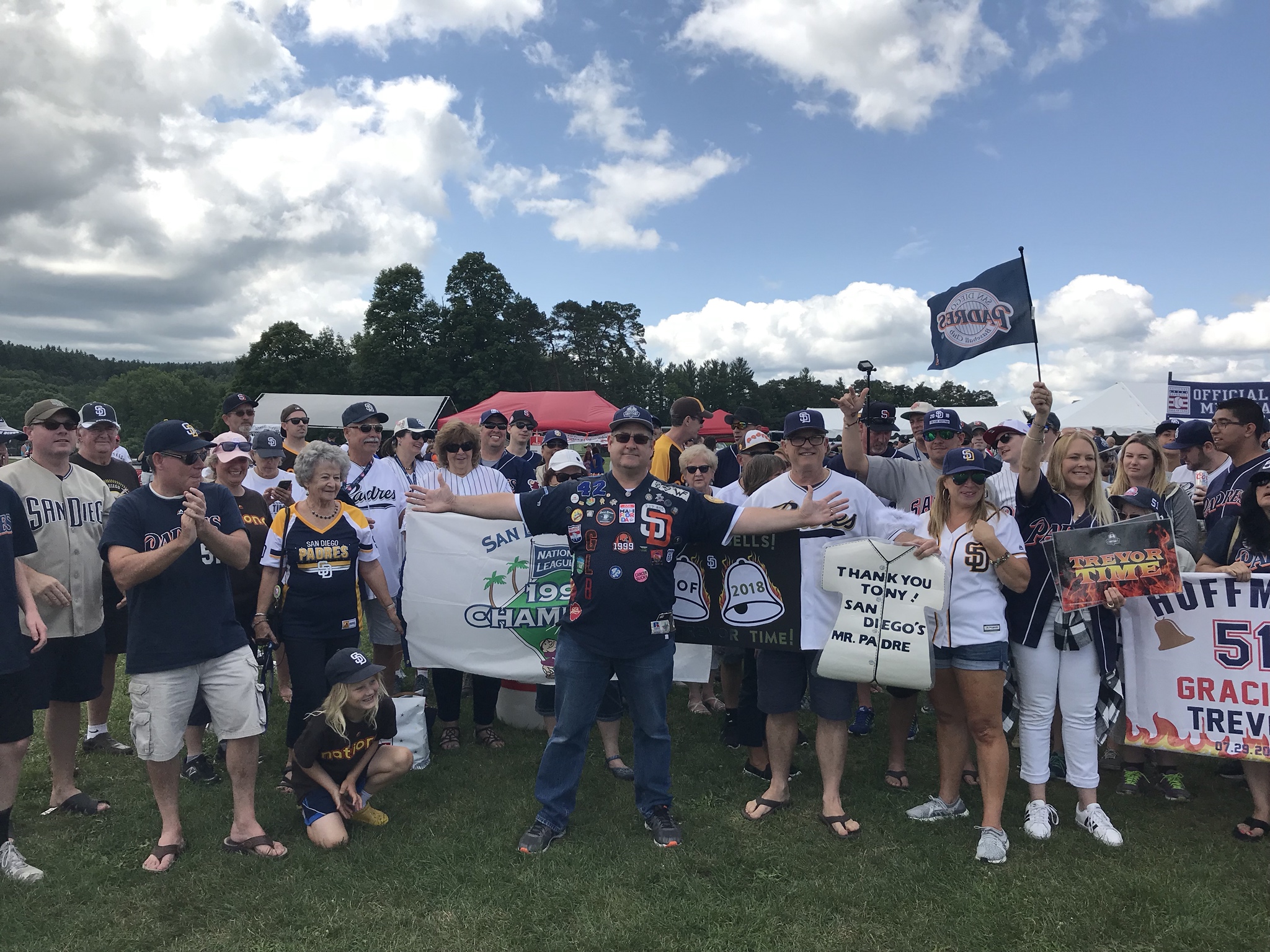 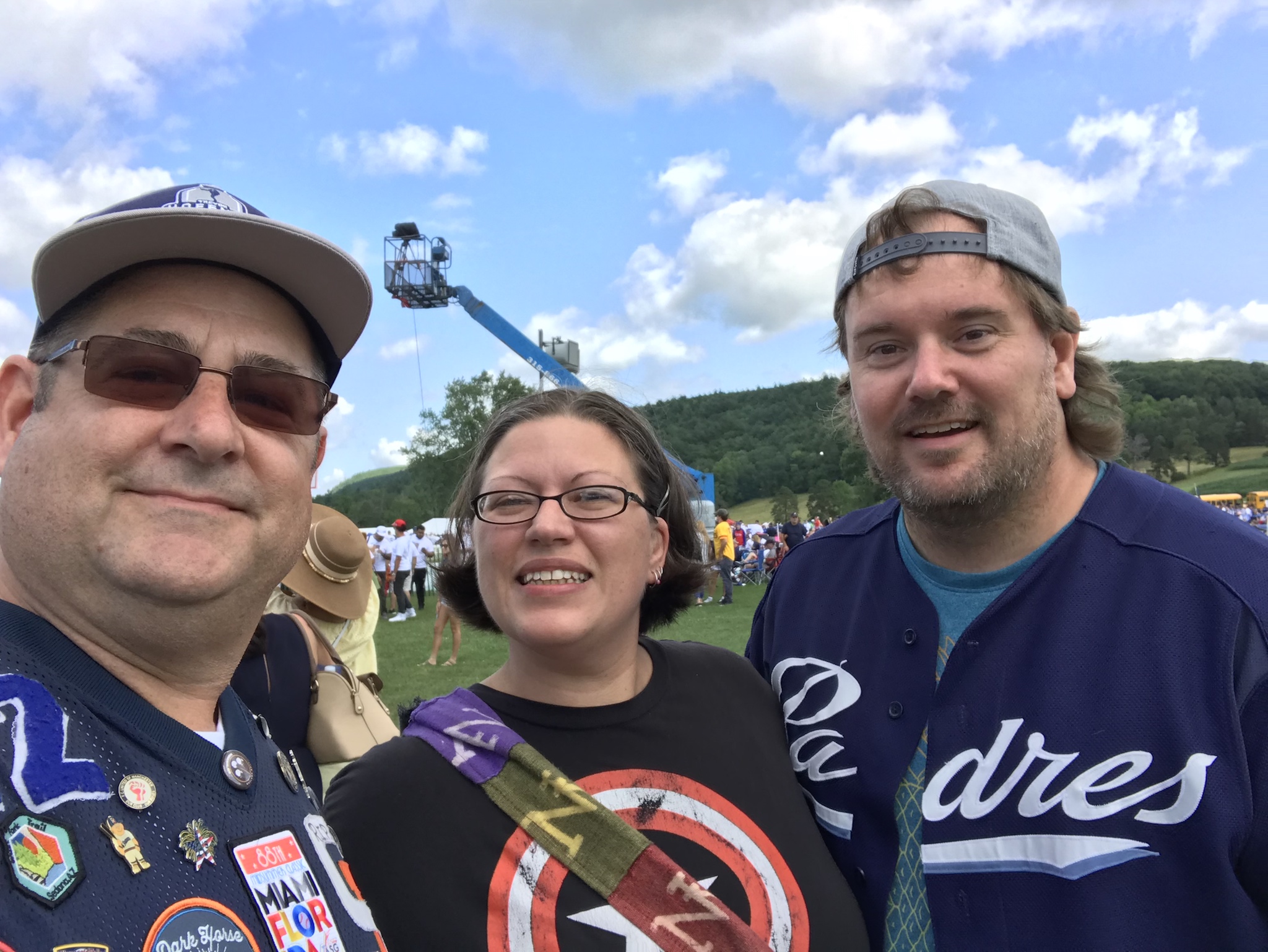 We also ran into Uncle Teddy and had a chance to share a few words, to thank him for his many years as the radio voice of the Padres and to wish him many, many more years of the same. 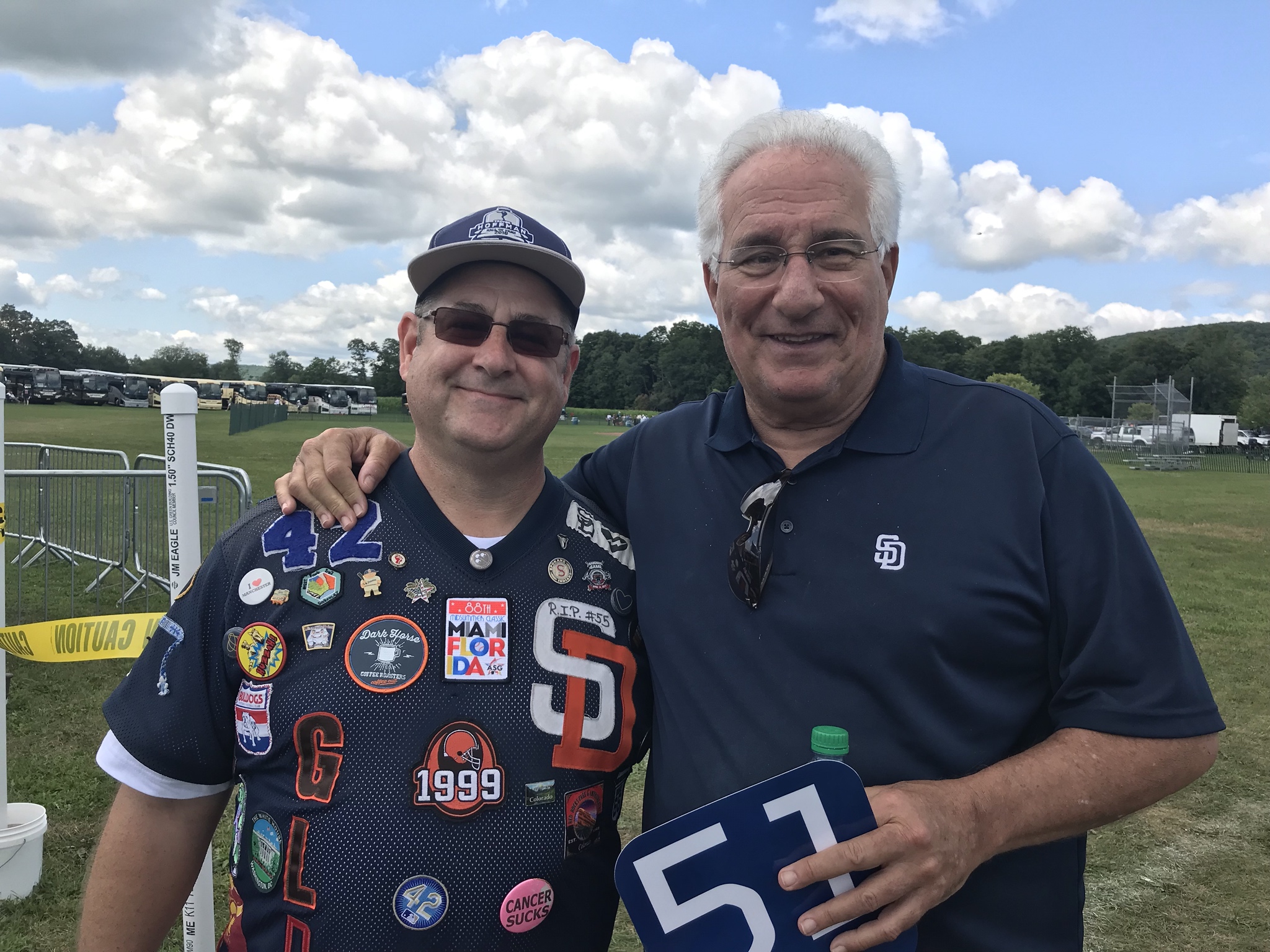 We stayed at the River the following week and headed home on Saturday. The Traveling Jersey was adorned with two new patches. One for the Thousand Islands part of her journey. 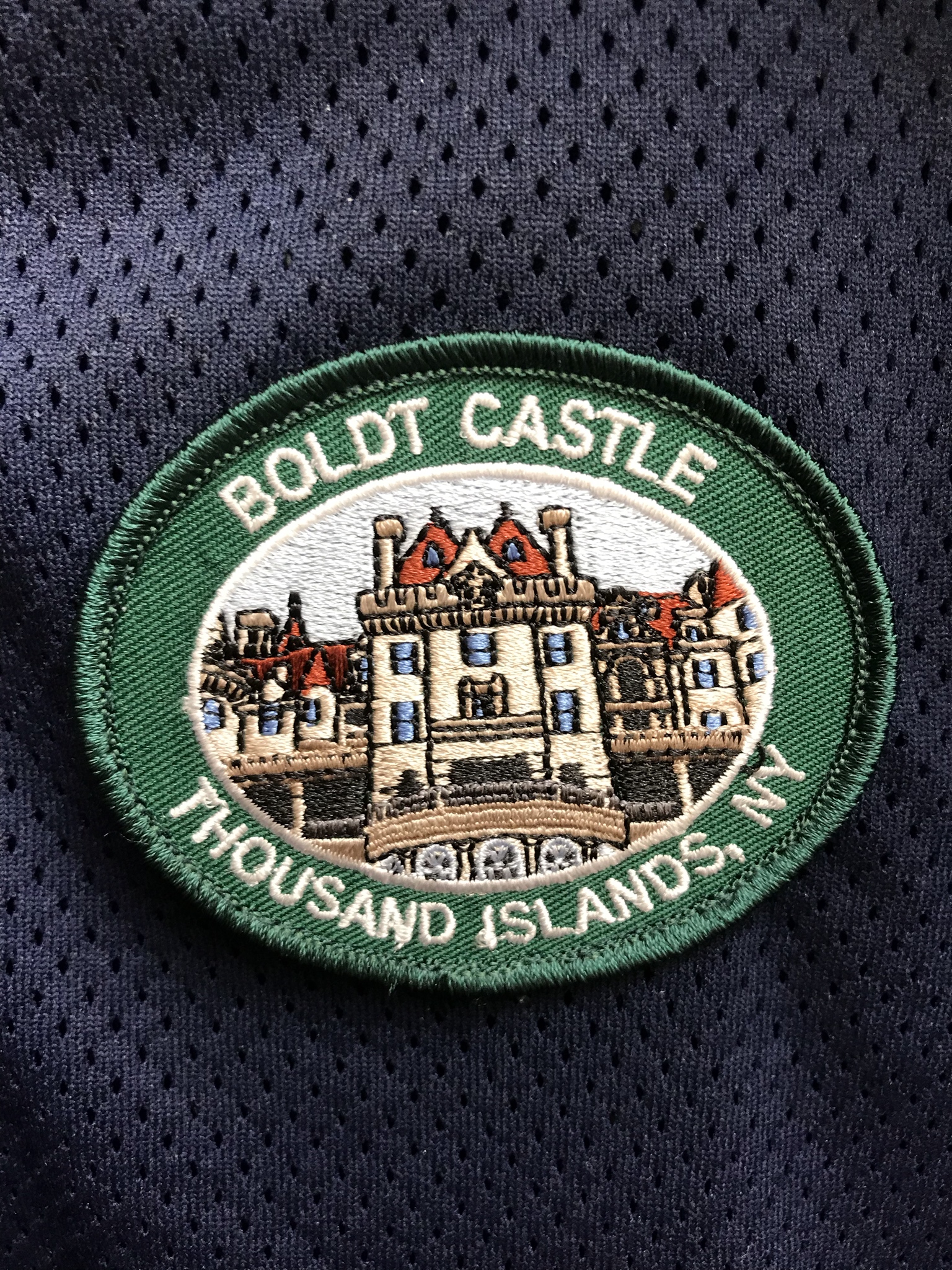 And of course, one for the Induction Ceremony, which as a large-ish patch needed some decent real estate in an already crowded field.

So, with an apology to the 1999 Cleveland Browns that got punted further down the jersey, the Trevor patch took its rightful place… 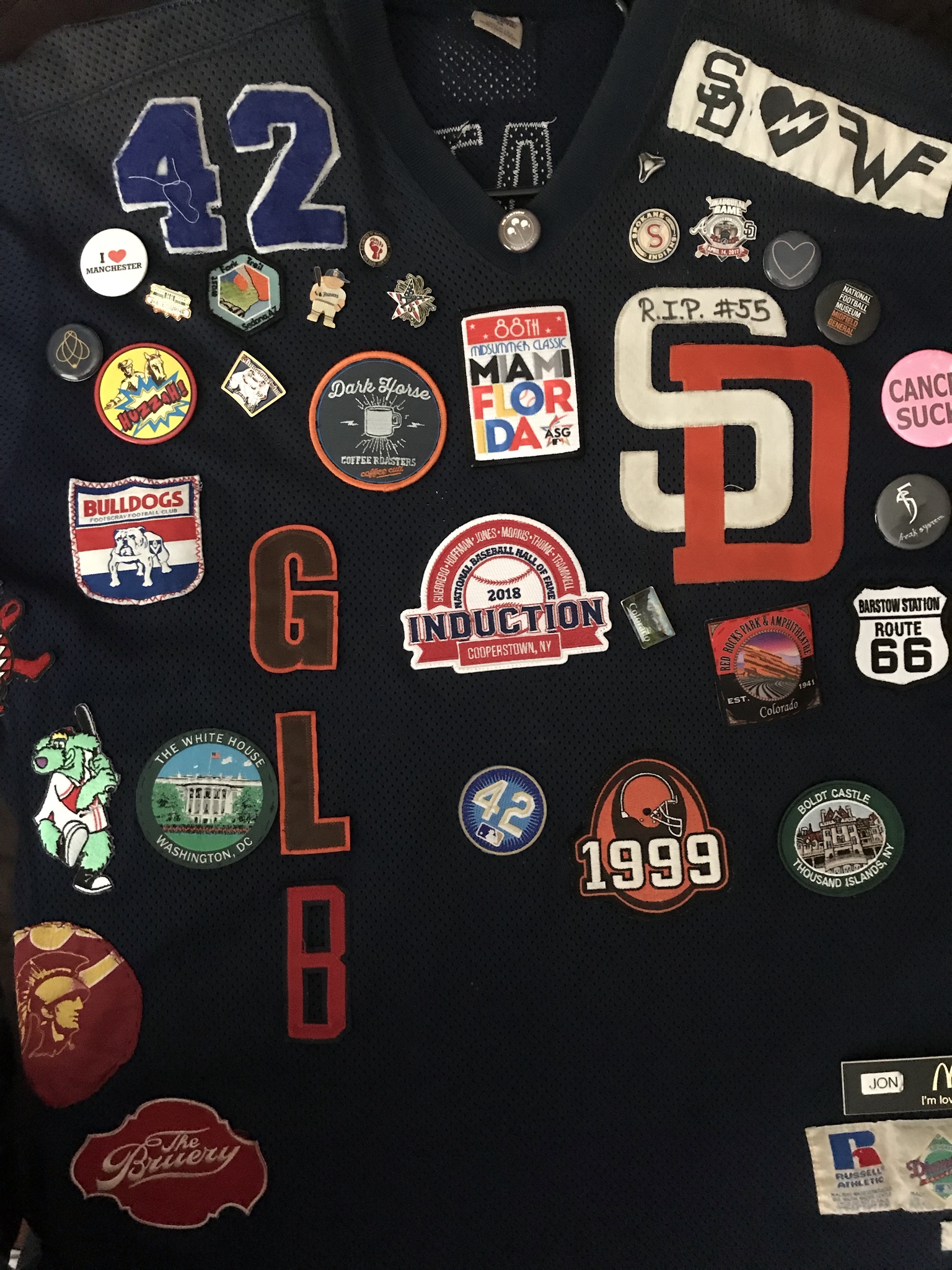 Now I have to go find a job.