Share All sharing options for: MacKenzie Gore on his Independence Day performance

Just after MacKenzie Gore threw his last warm-up pitch down the first-base line before Wednesday’s start, the lefty shook Pitching Coach Burt Hooton’s hand and heard the words, “Go have fun, will ya.”

The phrase is used as a verbal relaxant, but Hooton’s words to Gore before he took the mound in front of an Independence Day crowd of 8,000-plus in Fort Wayne, Indiana, held a deeper meaning.

“I’m gonna be honest, I’ve struggled a lot, it’s been a slow start for me,” Gore said. “I’ve only thrown 26 innings now and [Hooton] pretty much said stop pressing, just go out there and have fun. And that’s what I did tonight. “

Independence Day marked the first time MacKenzie Gore exceeded four complete innings since his high school days. The 19-year-old also picked up his first win in what many could consider the best start of his professional career. Six innings of four-hit ball with two walks and six punch-outs doesn’t tell the whole story. The first hit Gore relinquished in the third inning froze first baseman Jalen Washington and snuck through the right side.

Add to that two occasions where catcher Luis Campusano and Gore thought they had strike three in the first and fourth innings, and adjusting for poor luck and potential missed calls presents an even more admirable performance.

“We thought those were strikes,” said Gore after the game to two local Fort Wayne news channels covering his outing and myself. “But we got back up there and [got out of the inning] both times.”

The featured pitch of Gore’s outing was his curveball which mainly sat between 79-81 mph. He threw six in the first two innings, eventually striking out two in the game on the pitch, with three strikeouts on fastballs (91-94 mph) and one on his sparsely used slider (85-86 mph).

Slider below at 86 mph for his 4th K. @TinCaps #Padres pic.twitter.com/gr2yb1KcV0

“I know he wants to be able to command all four pitches.” Tin Caps Manager Anthony Contreras said. “He’s been working really hard in [his] bullpens with [Hooton] to refine that curveball because he can be inconsistent with it sometimes.”

Gore’s changeup is his fourth pitch, an offering not used in his Independence Day outing, but one Fangraphs gives the highest future grade among his repertoire. The ability for Gore to hurl six scoreless innings and not use a potential plus pitch is one of many feats that leave Padres fans salivating for the future.

For the majority of 2018, however, Gore was held back from working to realize his potential. A blister on Gore’s left-middle finger sent him to the DL on two separate occasions. When asked about his blister after the game in the Tin Caps batting cages, Gore replied, “It feels good, I’m not on the DL...” with a laugh.

Contreras echoed Gore’s positivity around the blister. “For him to go out there and give us six innings, it’s a confidence booster, it kind of - knock on wood - puts us in the clear of the blister problem and everything like that.”

Gore’s mechanics are extremely dynamic, marked by high hands and a high leg kick that flow as if they’re tethered together by an invisible string.

The range of motion from the peak of his hands and leg to front foot strike shows how dynamic Gore really is. 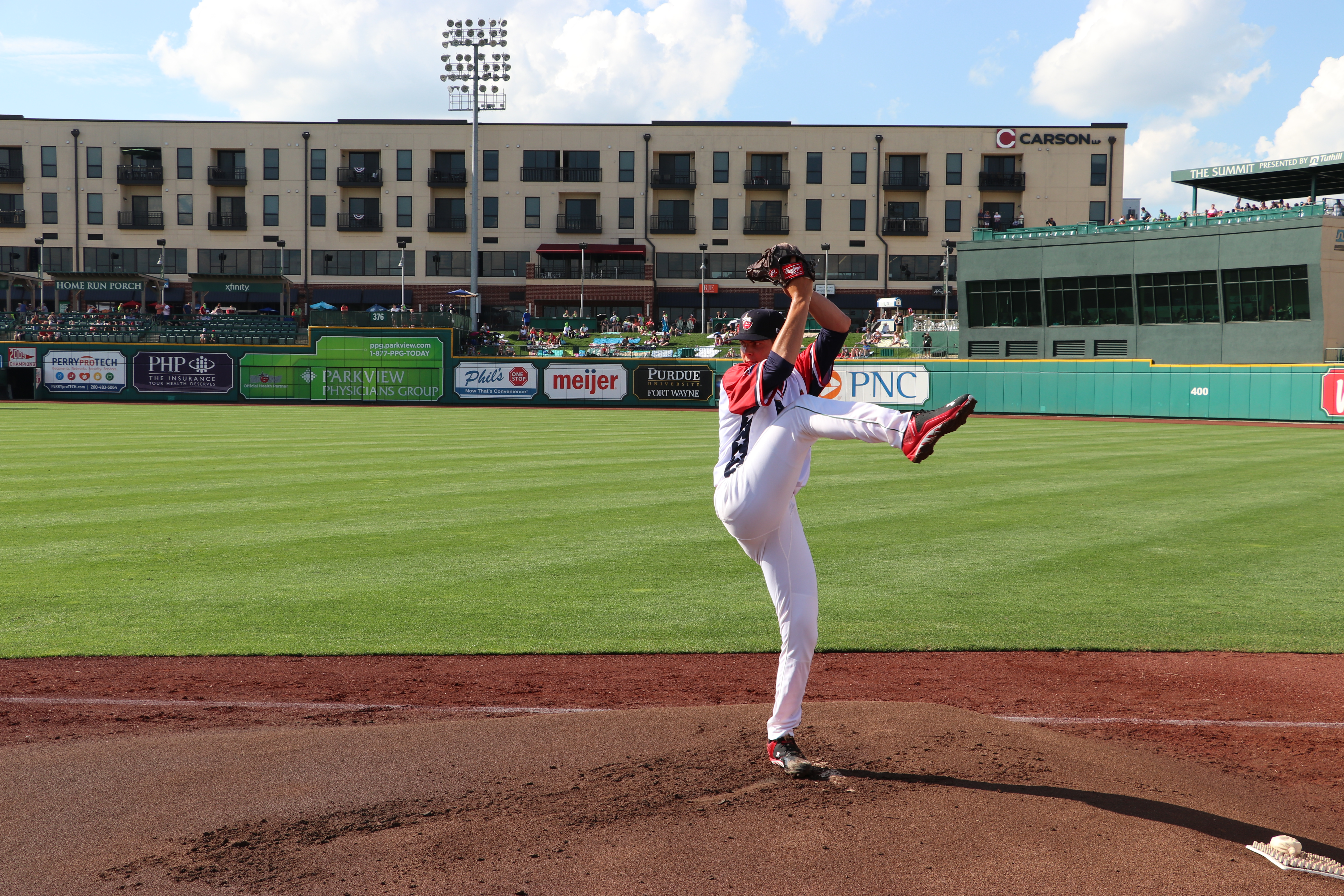 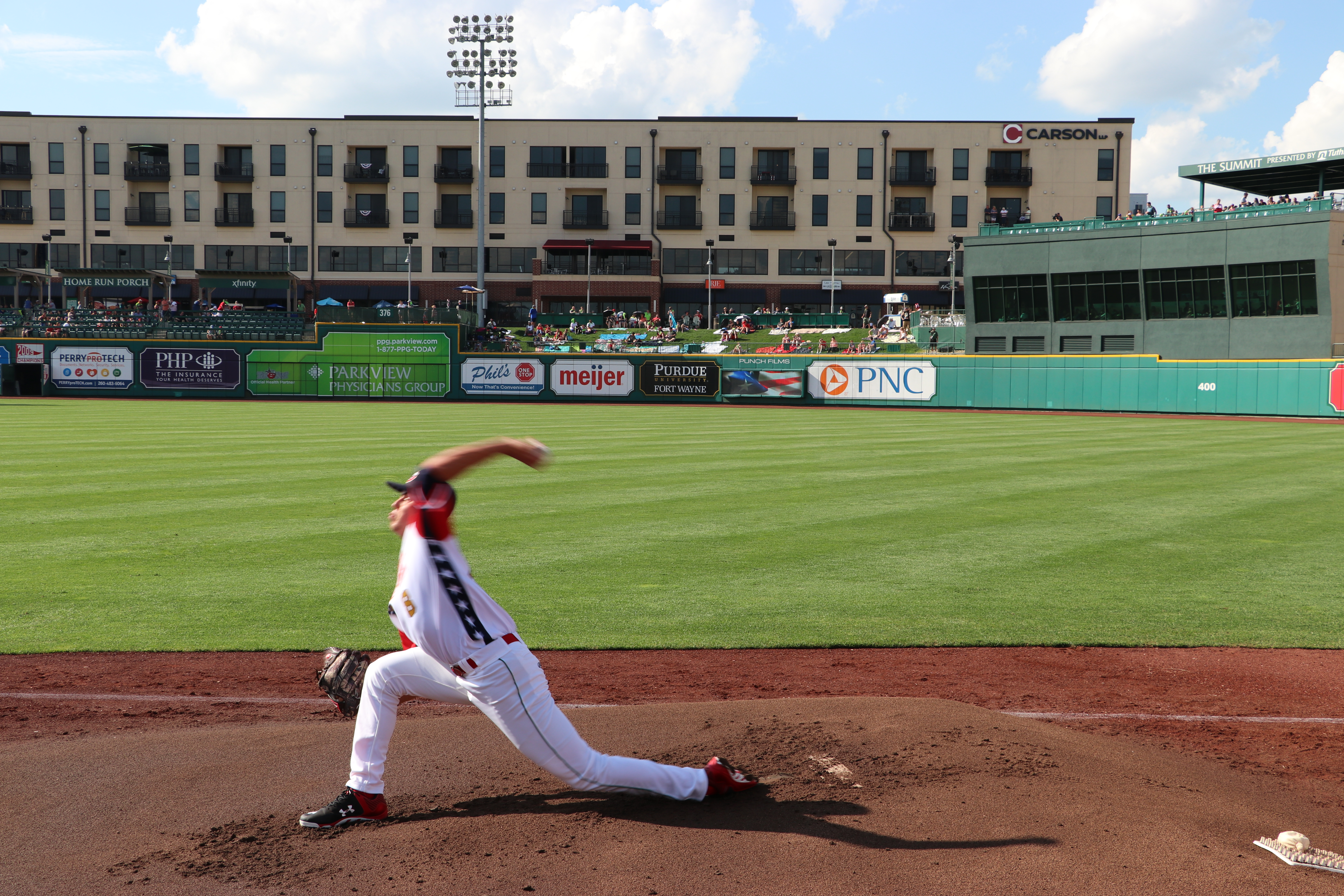 Gore told Jonathan Mayo of MLB Pipeline last Spring that his leg kick “just kind of happened.” Even more impressive than his motion is his ability to sustain his explosiveness for 80-plus pitches and maintain the potential for plus control. Gore holds a sub-seven percent walk rate this season, roughly a full percent below the Midwest League average for qualified pitchers. (Keep in mind Gore doesn’t turn 20 years old until February 2019.)

While his mechanics remain as unique compared to years past, another aspect of his aesthetic has actually changed. Pictures of Gore from April of 2018 show an all-black Rawlings glove. Watch Gore warm up prior to a game in any of his future starts and you might notice a camouflage variant.

“It’s something different,” Gore said. “I did have an all-black one, I didn’t plan on using the camo one this season… but the black one wasn’t getting outs, so I switched up. I’m going to use it as long as I can.”

Baseball players are naturally superstitious, but Gore’s talent suggests he might not need intangibles to buoy the rest of his minor league career. Combine his potential for four plus pitches with his desire to compete and you’re looking at a southpaw with a clear path to higher levels, and hopefully one day, Petco Park. Gore has handled struggle well early in his career. Contreras has noticed and is excited for Gore to become a key part of the Tin Caps rotation moving forward.

“That’s the whole point [of] the minor leagues,” Contreras said. “You making strides whenever you go out on the field... regardless of your prospect status, whatever it is...”