Of Jerseys and Men

Share All sharing options for: Of Jerseys and Men

Christmas came early for me this year. While working a dull dreary day a few weeks into December, I received a few shipment boxes and popped them open. Lying in wait for me were pristine, freshly sealed Padres jerseys.

Of course I had to get both. 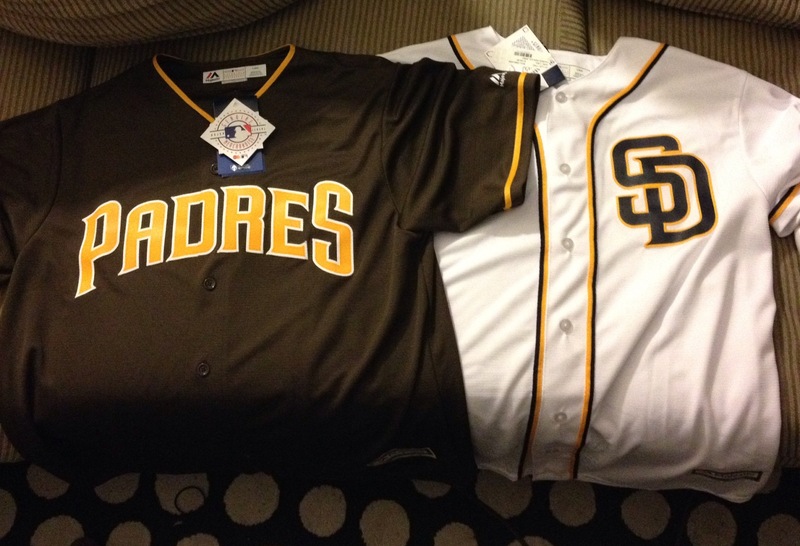 Both jerseys shown are the Cool Base versions with no name on the back. After tossing this picture up to Twitter, MarcusSDTX posed this question to me:

@SDHatGuy Are you putting a name/number on those, or just leaving them blank?

I vaguely remember thinking about this a long time ago, but Marcus' question triggered this thought: what drives a person to pick up a certain type of jersey and why?

Marcus and I went on with some jersey talk:

@marcusSDTX I get you. That's the catch with me and player names: not sure who'll stick to the team long enough.

Naturally there are tons of viewpoints about the jerseys we choose for our collections and to wear out for all to see. Joe was kind enough to offer his time and viewpoints for this article, and I definitely invite you to do the same in the comments. What do you look for in a jersey? We'll take a look at the many choices you can make in selecting a jersey, starting with the easiest choice for most... 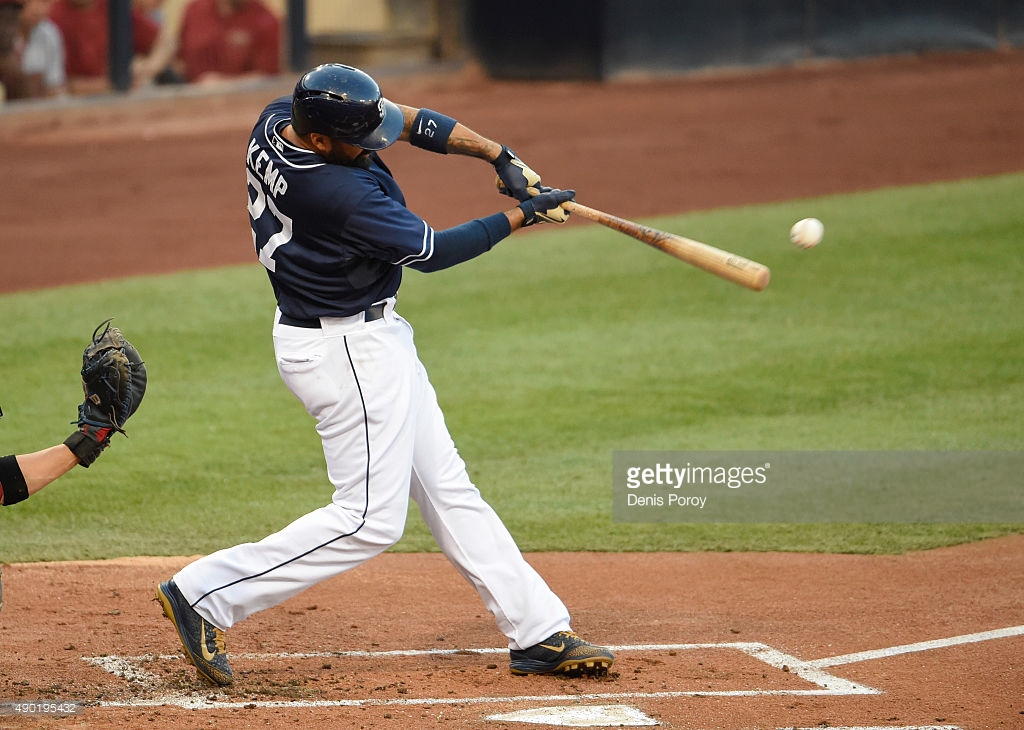 Player of the Now: Modern Faces of the Franchise

This can be a little tricky, with the state of flux the team is in, as well as the franchise's historic inability to hold on to stars for an extended period of time (with two notable exceptions). With James Shields and Matt Kemp cropping up in trade rumors every so often, I'd be hesitant to shell out a couple hundred dollars for a polyester shirt with either of their names on the back, especially considering that they might never actually see action in these new jerseys. If I was to buy a new jersey of a current star, I'd go with Will Myers since he seems to be in the team's plans for the foreseeable future, plus moving him now would be selling low.

The most common jerseys I've seen from our current crop of players are Matt Kemp jerseys. I presume his "face of the franchise" status makes this a popular pick among fans (and marketing), especially for those who defected from the dark side or are general Kemp fans. I've seen a fair share of Upton jerseys, which I found a confusing investment. I do feel bad for those who invested in Kimbrel-backed wear and now the Jedd Gyorko giveaway jersey hanging in your closet is an anachronism. I'm with Joe, as Myers would also be my pick for current star player to wear now. I would have probably said Norris last season, but it looks as if he may become a commodity should the season not play to our favor.

Overall, this jersey choice is a great pick for those who like to be on the cutting edge of Padres fanhood and want to show they're invested in the current roster. While there may not be much to cheer for now, at least you know your player(s). 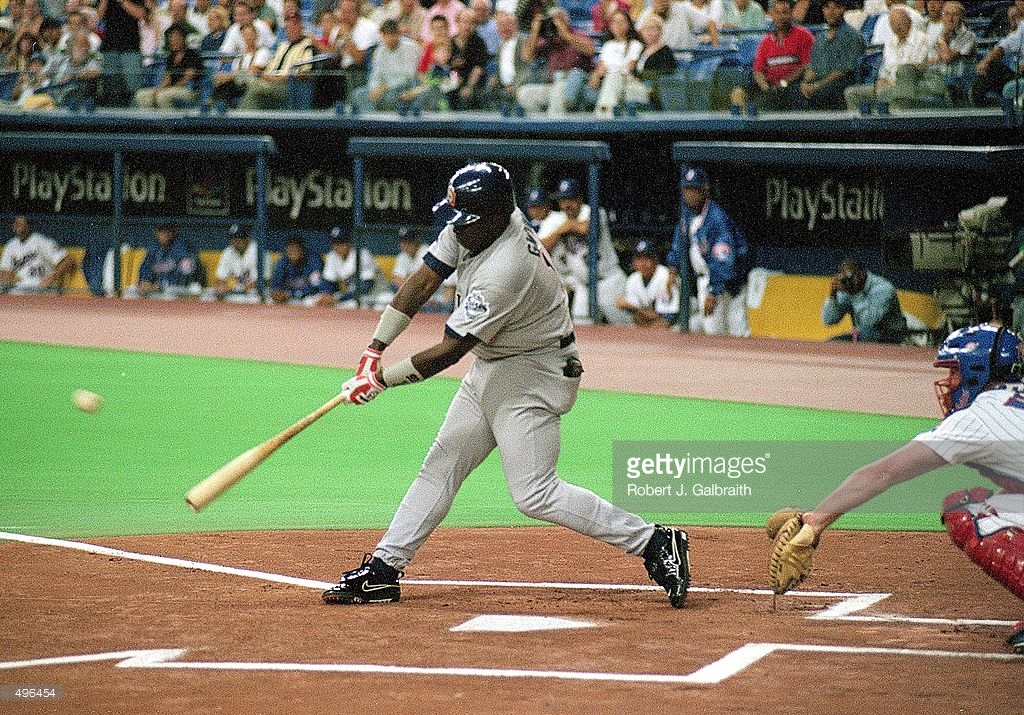 I actually have a bit of a story for this one:

A group of British soldiers came into my store looking to load up on Charger gear before embarking on a trip to see their first American football game. Whilst browsing the shirt racks, one of the men grabbed a Manti Te'o shirt and asked "Hey, is this bloke any good?" My face must have given away my opinion since the group chuckled. "Nah, not really," I said. I pointed to a shirt emblazoned with the iconic 55. "That player there, Seau. He's a classic. You'll fit right in wearing that."

In my experience, you really can't go wrong with a classic Padres player.

I was going to say you can't go wrong with a Tony Gwynn or Trevor Hoffman jersey, but then it occurred to me that you can. Have you seen those officially licensed 1978 Padres jerseys with Tony's name and number on the back? I know I shouldn't care, but those and similar anachronisms irk me SO much. But to each one's own, I suppose.

...except for that. I'm not one for anachronisms either. I caught a glimpse of a Trevor jersey done in the 70s style. Urgh. A bit less offensive are the Gwynn jerseys done in last year's uniform, but it's still odd in the same way that seeing a Seau jersey in the modern Chargers uni set is.

Each era of Padres livery has at least one iconic player attached to it. Nate Colbert, Randy Jones, Rollie Fingers, Gaylord Perry, and Ozzie Smith come to mind from the first decade and change, while the 1984 squad offers a number of memorable options.

Joe's got it right here: if you go classic, try to stick to the person wearing that era's uniform. There's tons of choices from Padres past to rep at the games. Bonus: most of them were wearing brown! 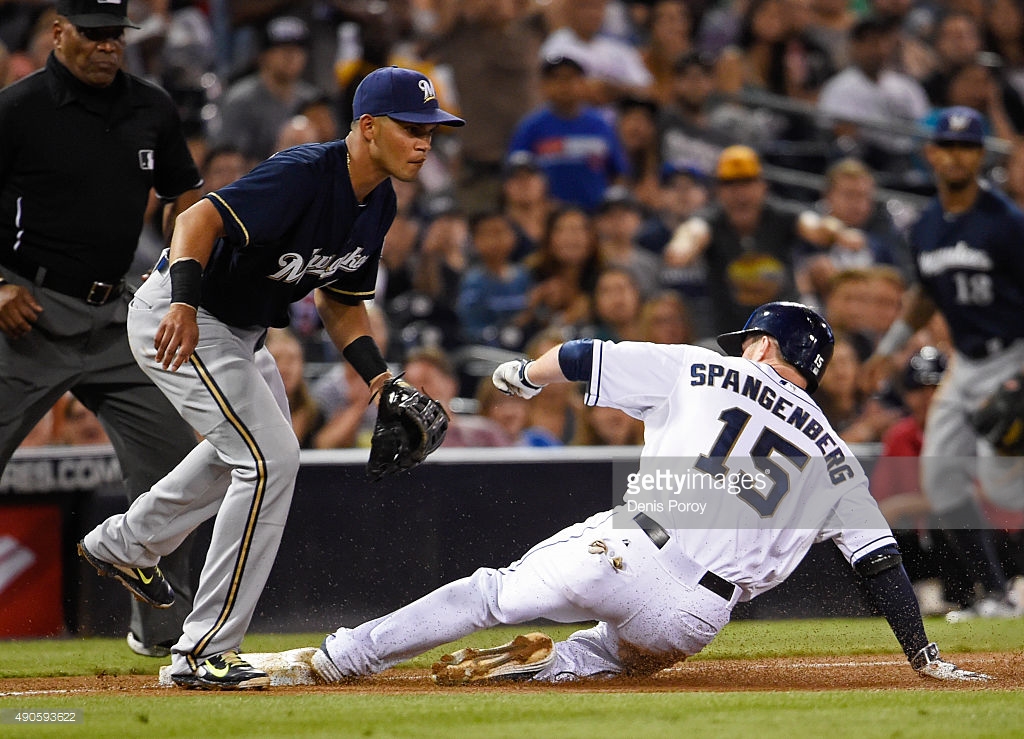 Our team: Players without the superstar status

This is always a good way for someone to show they're more than just a casual fan, although I've never found it necessary to prove myself to strangers. I do, however, tend to gravitate toward less heralded players and underdogs, so this is how I can represent my appreciation.

You know which jerseys I kinda wish I had? Eckstein and Denorfia.

Of course buying jerseys of the Alexi Amaristas and Yangervis Solartes of the world has the same peril as getting one of a Kemp or Shields: they're bound to be on another team at some point, probably sooner than later from what we've learned about AJ Preller. However, if you obtain and hang on to their jerseys, they can one day fall into the following category.

I'd like to meet the guy who owns an Alexi Amarista jersey. Anyway, this is also a catch-22 of being a Padres fan in general; the player who you plunked down 100 bucks to represent may not be around to represent once you enter the gates to watch the team. There are certain players with a certain Padres quality worth looking for and owning, much like Marcus' pick:

@SDHatGuy Definite issue. Still love my Kouzmanoff jersey though, actually bought it after he was traded.

If I had to pick a current player to wear, I'd go with Spangy. 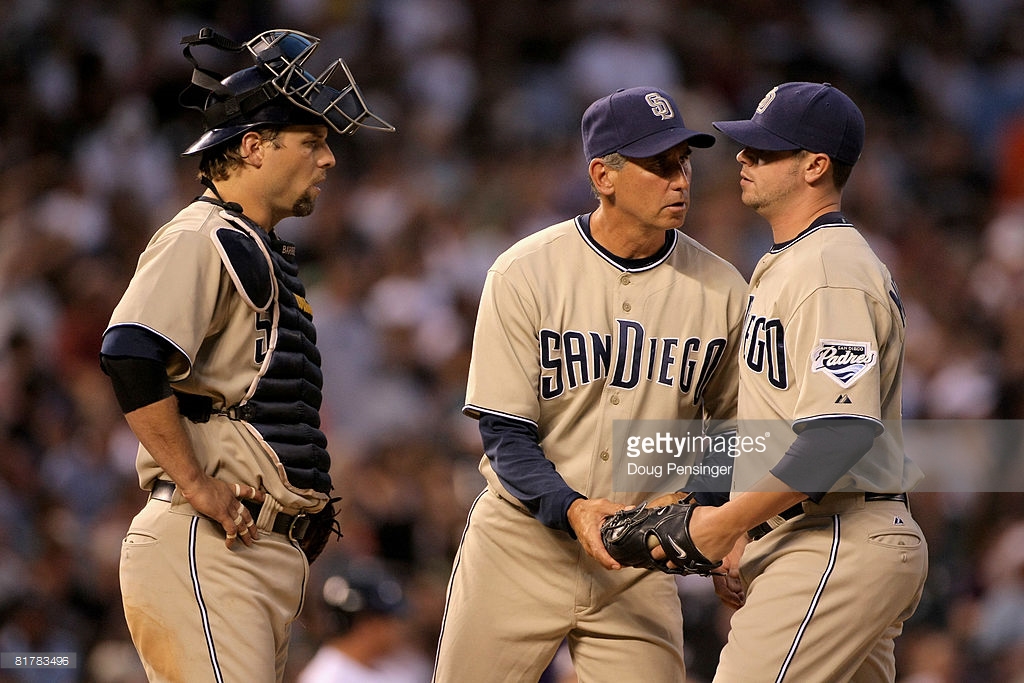 Most of the jerseys I own fall under this heading. As a devoted student to every aspect of the team's history (read: a nerd), I enjoy having a physical document of the time spent in San Diego by guys like Ron Gant and Michael Barrett, and all the better if it happens to be game-used. These are also nice for those trying to Pokemon (that's a verb now; just ask Jack Donaghy) all the various jerseys the Padres have worn through the years.

I own one particular obscure jersey: an Alex Webb 2001 AFL Padres jersey. It was an eBay score that I picked up only because the jersey had the distinct Padres navy/white/orange with the all-white interlocking SD on the sleeve signaling the fated change away from my favorite colors. I've never dove into the game-used market myself (the hat thing is already expensive), but more power to you if you grab something that's actually seen action on the diamond.

This choice sort of goes hand-in-hand with proving to strangers and other fans that your love for the team runs deep. Like Joe says, it's also great if you're looking to grab all the Padres jersey variants. These are definitely the "B-side orange tie-dye vinyl of some band you've never heard of" of Padres jerseys. 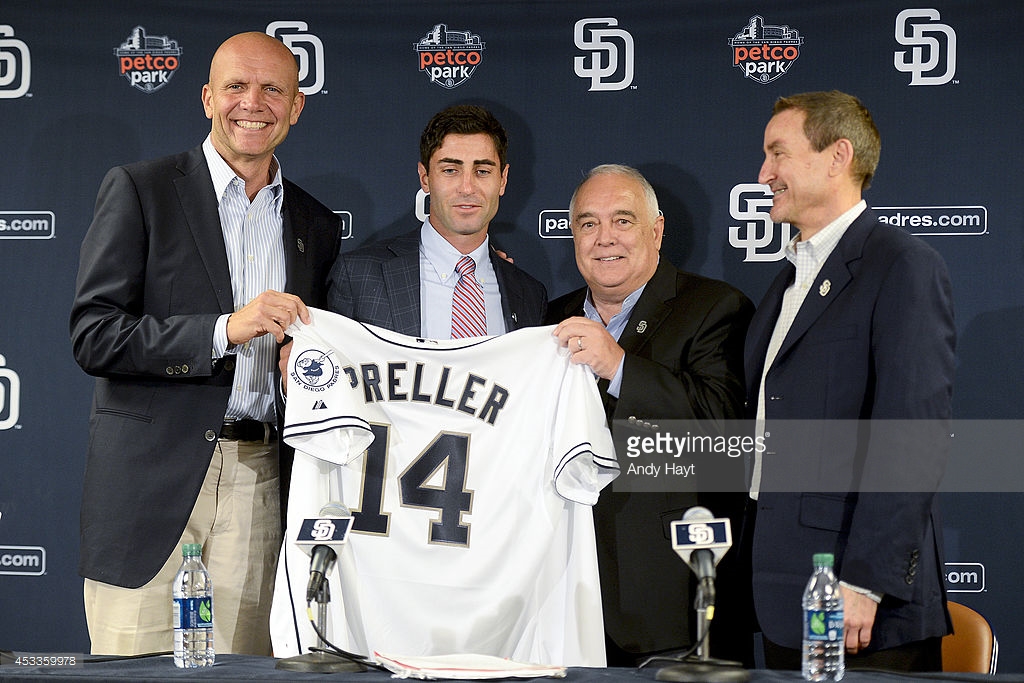 Going Custom: Your own Jersey or Joke

Custom jerseys, like wearing a band's t-shirt at their show, are an object of derision from a fair cross-section of fans, for reasons I'll never fully understand. Sure, sometimes the jokes might be awful or the references eyeroll-worthy, but I don't see that as any reason to disparage the practice as a whole.

I've seen a fair share of custom Padres jerseys. Manziel is a popular joke for Pads fans who like to party or are trying to take a swipe at ownership. The Preller #14 (or $$) made the rounds last season after his premier on the offseason stage. Some of us spotted a guy rocking a "PTBNL" jersey during the Social Summit. Of course, it doesn't always have to be a joke emblazoned on your back.

As for getting one's own name on the back, that almost makes more sense than getting one with a stranger's name on it, especially when that stranger might not have any ties to the team in a month or so. That said, I have never gotten a Padres jersey with my last name on it, although I did get one for a young lady I was seeing back in 2008 with her name on it because she kept wearing my white Trevor Hoffman jersey and stretching out the top portion.

I've played with the idea of getting my own last name on a jersey or even SD Hat Guy (which might be a little egotistical for me). No shame in going this route unless your favorite number is being worn by a current Padre and you don't want to share. I had this problem until Middlebrooks became a Brewer.

Picking up one for your lady friend in order to save your jersey works too. 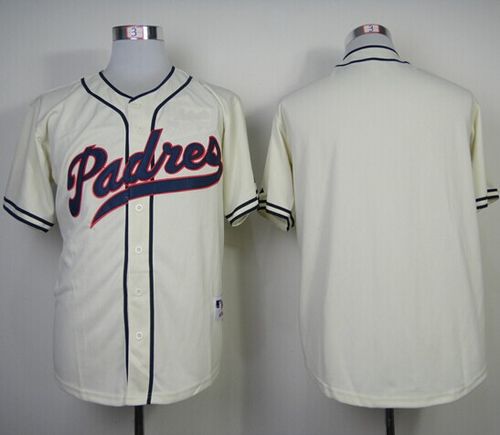 No name, no problem: Blank Backs

This seems like a real no-lose proposition. A blank back is at least the very safest way to go if you want an article of clothing that you won't feel hesitation in wearing in the future. Not only do active players sometimes get traded or leave via free agency, but even retired players aren't an entirely safe bet. The first example that comes to mind is Kirby Puckett. He was a great player, and I enjoyed watching him on the field, and I'm sure if I were a Twins fan I would have worn his jersey long after his retirement... up until details emerged of his unsavory conduct late in life. I mean, I certainly don't think it's risky to buy a Randy Jones jersey on the off chance that we find out he has a freezer full of prostitutes he murdered, but my point is that a blank back can absolutely never do anything to make you feel embarrassed to wear it.

I once read this about wearing names on jerseys: I'll never wear another man's name on my back because they could let me down in the future. The one fortunate for Padre fans is that Tony and the dear Colonel had lived their lives as paragons for others to look up to.

With modern athletes exposed to more of the spotlight than ever before, it's much easier for a player to Aaron Hernandez themselves into a burning oil drum. Even a certain former Padres shortstop found himself on the wrong side of the law and fans should have found the nearest local Goodwill to donate unwanted jerseys.

Going with a blank back jersey helps prevent any of these circumstances and shows that you're a fan of the team, not just any certain player. Baseball is probably one of the few, if any sports where wearing a blank jersey doesn't look completely awkward. Have you seen a blank basketball or football jersey? S'funny.

So what jersey do you prefer to rock? What type of jerseys do you absolutely loathe? Let's talk and share some jerseys!