For years, I've dreamed about what fun all of the Sisterhood of the Traveling Jersey members did when they get together. It almost definitely involves lots of pillow fights in their underwear and playing MASH. I've definitely masturba... I mean thought about how great it would be to join up with the sisters someday. Luckily, on Opening Day this season, I got to tag along with Jbox and Jonny Dubs and overheard them talking about how this would be the SOTJ's last year before it gets retired. I couldn't rest on my laurels, I needed to get cracking and finally live my dream. After finding out my wife had a work trip to DC in August, I saw my window of opportunity.

I met @greekpadre in an upscale Ralphs parking lot in Carlsbad for the long awaited handover of the magical jersey. It should be noted that under the tutelage of @greekpadre, Matt Kemp hit the very first cycle in Padres history. Much like the Rally Unicorn, the SOTJ is magical. 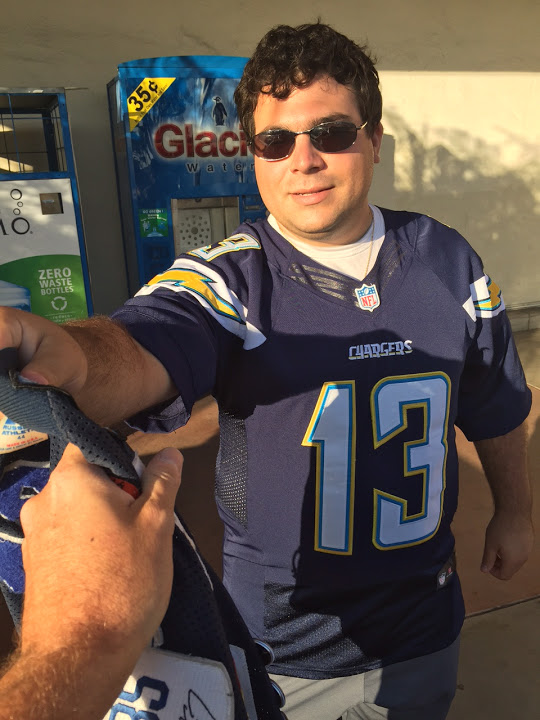 As soon as I had the magical jersey in my hands, I shoved it in my face and took a deep breath like it was a used panty I got from a Tokyo vending machine. The aroma can only be described as somewhere between musty and post-marathon running underwear. This must be where the magic is derived from.

I should preface this with a few things. One, I lived in DC for ten years so this post will have ample tourist advice for what to do/what not to do. Two, I flew out alone with an 18 month old and most of my days were spent taking care of a baby. Three, as a result, I did a very poor job of getting pictures of myself wearing the jersey while out, but rest assured, it traveled with us under a jogging stroller as a valued member of the family should and was put on for key moments.

Flying with an 18 month old isn't very fun, but it's also adorable. Like Alexi Amarista. 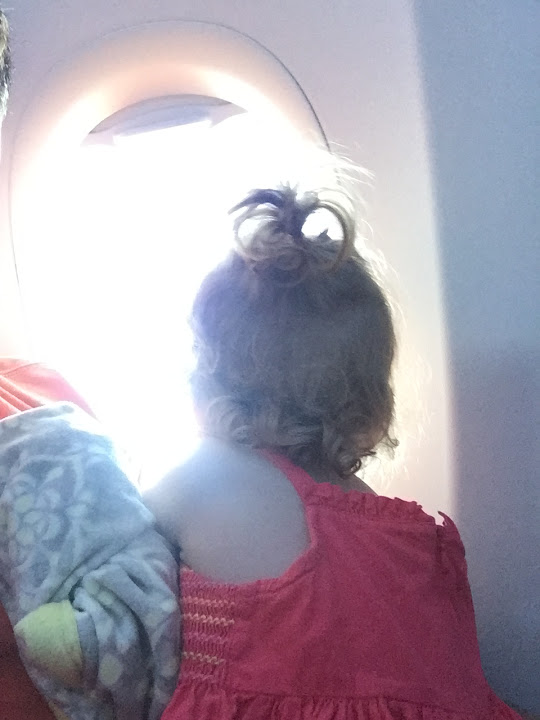 As most people do, I headed out to the Washington Mall my first day to run the kid and the SOTJ around in the stroller. The weather was about 97 degrees and about 500% humidity. Wearing the jersey for extended periods of time was not going to contribute well to the accumulated scent of the SOTJ. The normally idyllic mall is now torn up for renovations, which if I was smarter, could probably me made into some type of metaphor about our country in general. 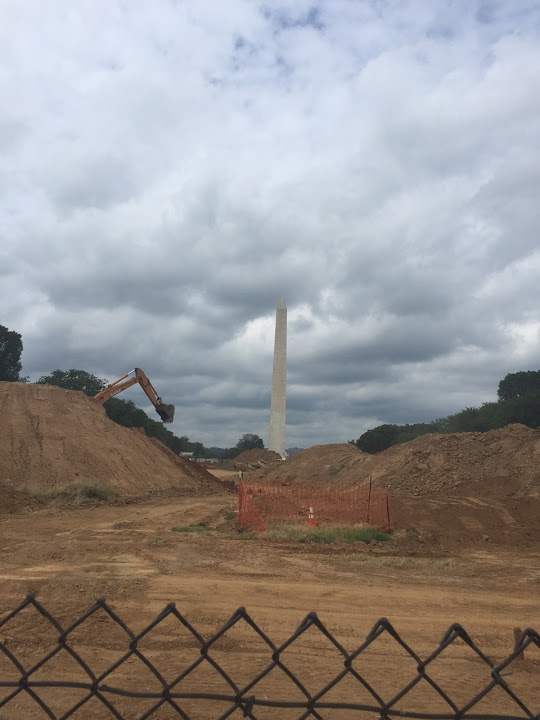 But let's face it, we've all seen the monuments in pictures. They are pretty, right? Especially the Washington Monument. I like that our national phallus commands respect and like me in my younger days, is always standing at full attention and ready to get down to business. 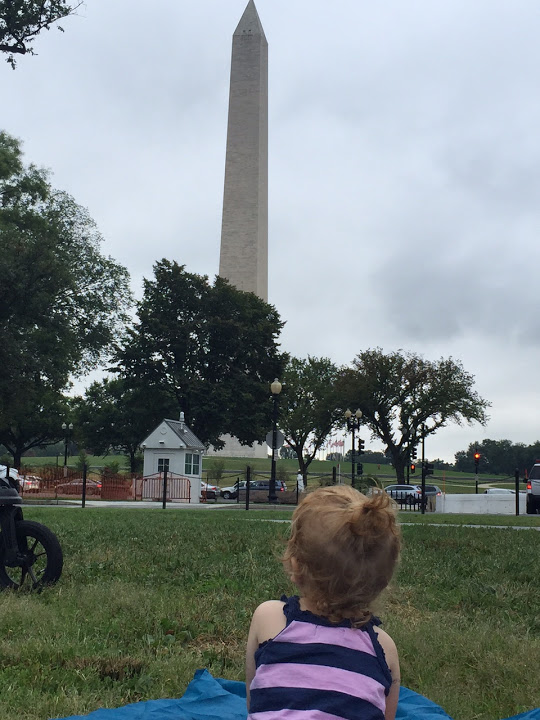 The number of pictures per day of people laying down on the steps to the Lincoln Monument and positioning the camera so the monument looks like their dong has to be in the tens of thousands. IT'S A FRESH HUMOR TAKE GUY FROM RUSSIA HERE ON HOLIDAY!

Even the Capital dome is under construction. I suppose if I was smarter, I could create a metaphor... ah never mind. 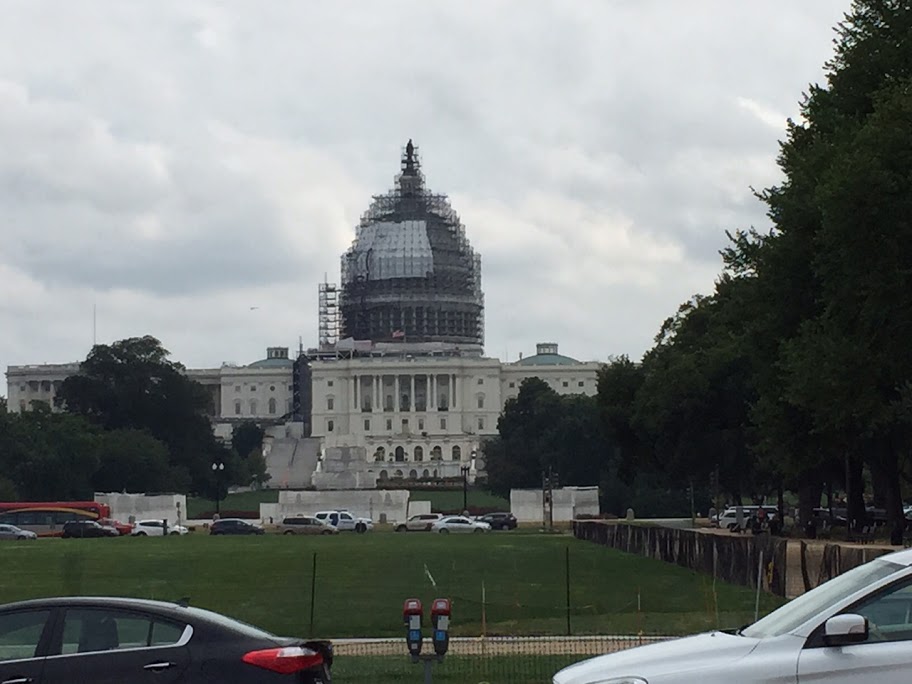 DC is a city full of nerds. Not like the comic book nerds we're all used to and tolerate for four days a year. Like actual nerds. Sit in a bar in San Diego and listen to conversations around you and you'll hear a few basic convos: what a dick their ex-husband is, what the swell was looking like today, what burrito they ate for lunch, the party they went to at some dude's apartment in PB, and when their next yoga class is. Meanwhile in DC, it's all talk about presidential primary polling methodologies, comparing and contrasting various states' bar exams, complaining about the local real estate micro regions, and discussing the latest Kennedy Center programs. Like I said, nerds. But nothing is riling them up like Donald Trump right now. The media makes it out to be like only a bunch of dummy Alabama voters are excited about him, but policy wonks in DC are SO excited judging from what I heard. I think they just want something to talk about. Anyways, Donald Trump appears to have bought this historic building in downtown DC for the express purpose of putting up a gigantic sign with his name on it. 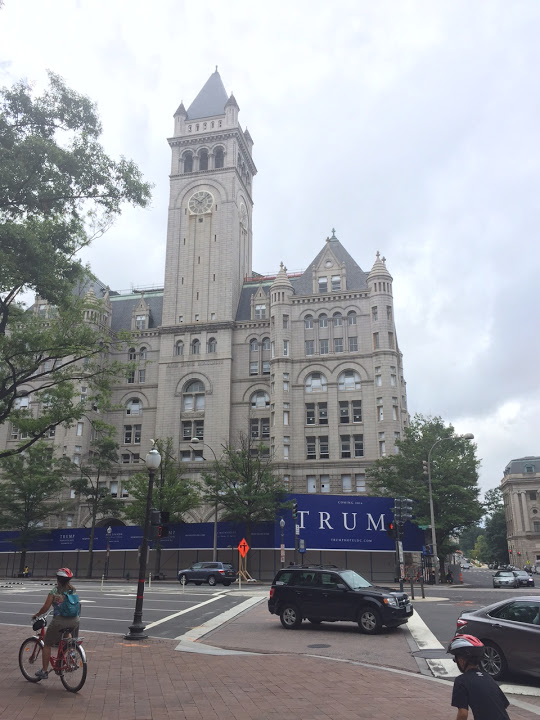 And what SOTJ trip would be complete without some type of baseball activity. I needed my baby to rack up another MLB stadium, her fourth, so we had to hit up Nationals Park. Unfortunately, my wife's selfish work scheduled her trip the week BEFORE the Padres come to town, so I got stuck watching the Brewers who I was still sour with for playing so well against the Padres a few weeks prior. Nationals Park is a fine ballpark. For all the stadium talk we put up with here, the Lerners, some of the wealthiest owners in MLB, conned the District of Columbia, a perpetually destitute semi-municipality, into basically footing the bill for the stadium. Unlike here where Mayor Faulconer keeps pushing the fantasy that the County will contribute equal money for a Chargers stadium with little of the benefit, the DC area's silly provincialism kept DC from going to Virginia and Maryland which are literally 2 miles away in each direction from contributing. The stadium itself is nice, but has little character. The food is boring, the craft beer options are dreadful, and the neighborhood around the park is better than 3 years ago, but 3 years ago it looked like Hamsterdam, so that's not saying much. I really enjoyed explaining the significance of the SOTJ to some drunk popped collar bros in my section and was relieved when they didn't puke Miller Lite on me and the jersey. Over the years, I've probably been to 40 games at Nationals Park and always leave thinking I missed games at the old RFK stadium where they played during the cherished Dmitri Young years. Not to mention that the Padres went 23-7 overall, and 12-3 in DC, the first five years of the Nationals existence, which was great. Since then, 14-22, which is not so great. Never forget those Scott Linebrink golden years. 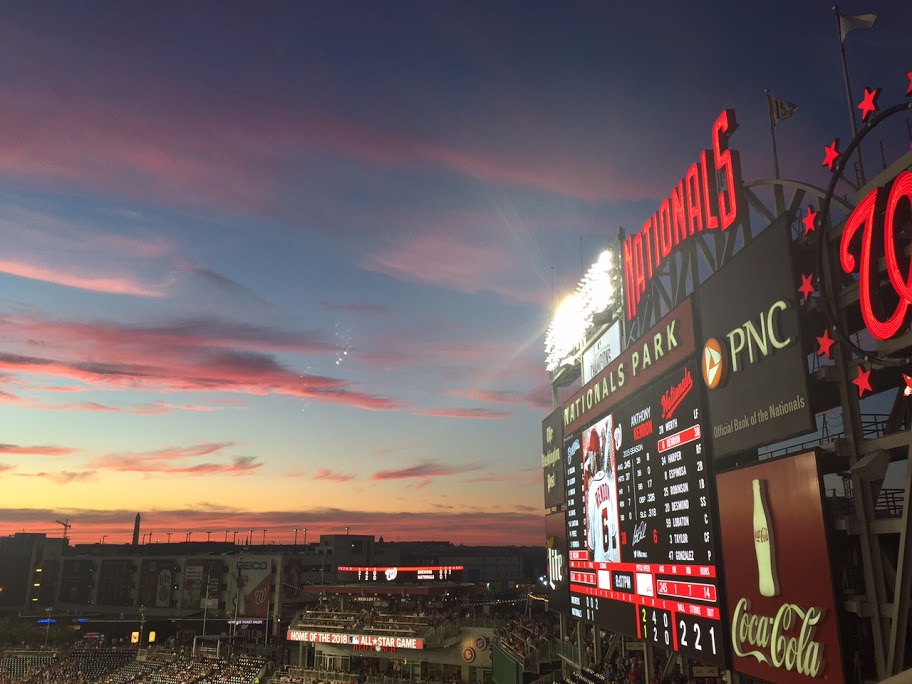 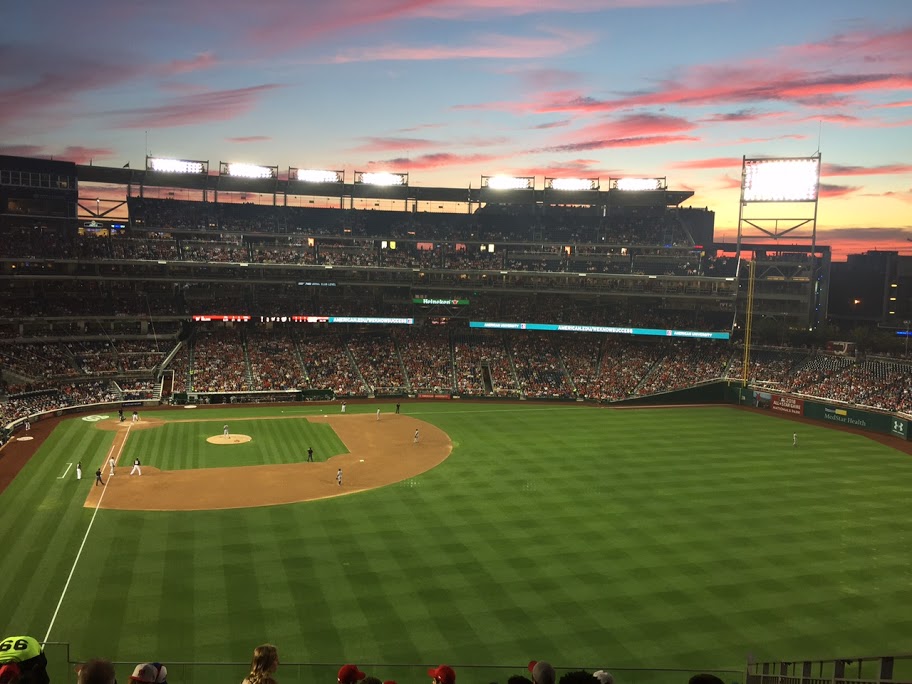 That's the meat of the SOTJ worthy activities on this trip that included ample diaper changing and nap supervising in the hotel room. But let's get to what's really important: DC travel tips.

1. Don't fly into Dulles or BWI to save a few nickels if you're visiting just DC. Just pay the extra $20 and fly into Reagan National. Dulles is like 40 minutes away from downtown, and BWI is just as far. They both have horrendous stretches of highway traffic between them and DC and no real public transit. Reagan is on the Metro line, or is a 10 minute cab ride to your hotel.

2. DC has lots of fancy expense account dining for butthead lawyers and jerkface lobbyists. They are good, but the sweet spot for food is in the budget range. The best chicken IN THE COUNTRY is in Arlington, VA, just across the river. El Pollo Rico specializes in Peruvian rotisserie chicken that is marinated in what I believe is a delicious spice mixture of cumin and liquid crack. It's $8 for half a chicken and a mound of steak fries, plus they sell Inca Kola there. I signed up for carshare just so I could eat here. Twice. In DC, and around the close in suburbs, you can find Nando's Peri-Peri. Their chicken isn't as good, but their spicy peri-peri sauce makes me fully turgid just thinking about it. Don't forget to order a side of perinnaise to dip the fries into. If you stay near Dupont Circle, Julia's Empanadas is open late and is the best option to soak up alcohol to prolong the nights.

3. Nationals Park has some OK food now but the lines are ridiculous. Especially for Shake Shack. If you really want Shake Shack, go to the Chinatown location. It's not nearly as crowded as Nats Park or Dupont. You can also get a very good elote at the stand next to Shake Shack.

4. Most DC beer is mediocre at best. They think they are doing great things, but compared to San Diego, it's swill. Atlas and DC Brau are the big ones, and Atlas has a few decent sours. You can find Atlas at Nats Park too, but it's their boring lager. DC Brau on the other hand is putting out competent beers, with one notable standout: On The Wings of Armageddon is OUTSTANDING. Like I'd choose it over Sculpin a lot of times if given the chance. Lost Rhino is OK, Port City is mediocre, and you'll find Dogfish Head everywhere but you can get that anywhere anyways.

5. The Smithsonians are cool and all, but the National Portrait Gallery in Chinatown is a personal fave. This is where the Steven Colbert portrait hung. While you're there, 7th Street and 12th Street/G St (Metro Center) are the food truck epicenters of the city, in a city that loves food trucks. I counted 14 food trucks at Metro Center last Wednesday. Get the Ethiopian if given the opportunity.

6. If you look on Yelp for craft beer, you'll probably end up at Bier Baron or RFD. They are fine, but their best days were before craft beer really took off and nowadays are full of tourists that got sucked in by write-ups from five years ago. Head to Meridian Pint, Churchkey or The Black Squirrel.

That about sums it up. I didn't buy any touristy garbage to pin onto the SOTJ. I hit up a presidential collectibles shop near the White House selling honest to god political memorabilia. They had some vintage pins so I picked up a few but wasn't sure which one was SOTJ worthy. 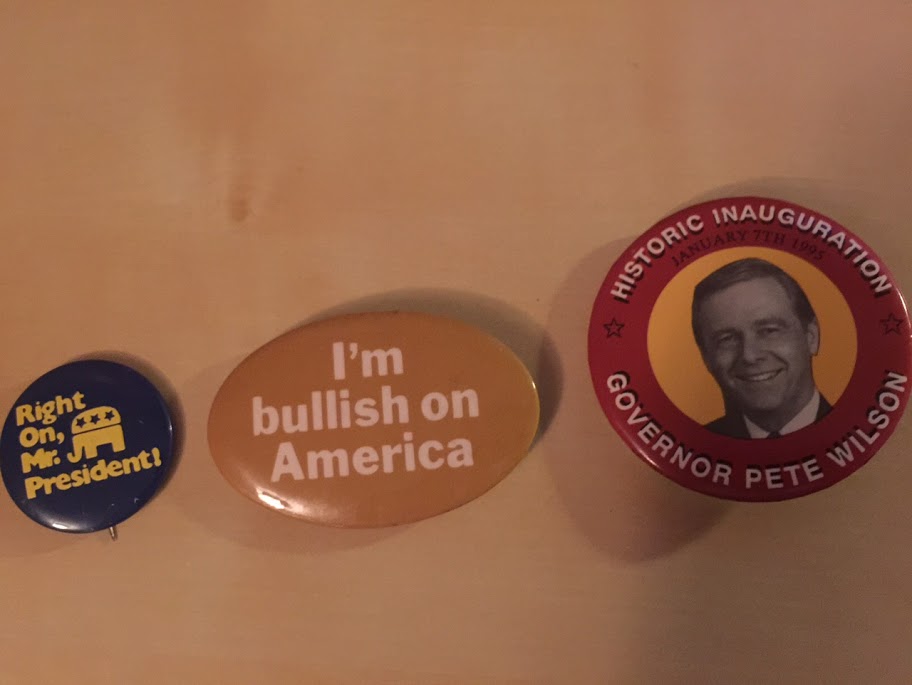 Of course, when Jonny Dubs pointed out that Pete Wilson was not just the former illustrious governor of the great state of California, he was a former San Diego mayor, I had no choice but to go with his vintage inauguration pin, which is now proudly displayed on the SOTJ.

I carefully packed the SOTJ in my bag and flew home. 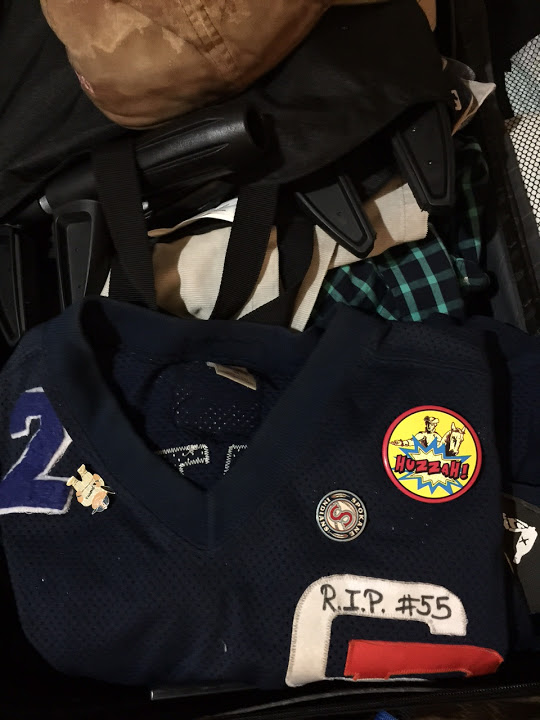 It's now sitting next to my bed. I'd like to snuggle it while I sleep, but if I breathe too deeply, I get a little whiff of the accumulated odors of the other 50 sisterhood members. I hope that when Jbox and Jonny Dubs retire the jersey, they find a way to preserve the musk for future generations. In the interim, I'm going to relish my time with the SOTJ and dream about those sweet, sexy pillow fights I'm going to now be invited to. I hope Jbox doesn't laugh at my girlish giggles.