You might remember the last time I had the jersey, which was a whopping 3 years ago in Pittsburgh. Being an LA resident, I was able to keep things more local for this trip, which luckily coincided with a shload of baseball.

Before I get into the recap, I just wanted to thank Jonny Dub and jbox for their help coordinating this. This is without question one of the most fun and rewarding things I've ever been a part of and I'm so happy to have been given the opportunity. 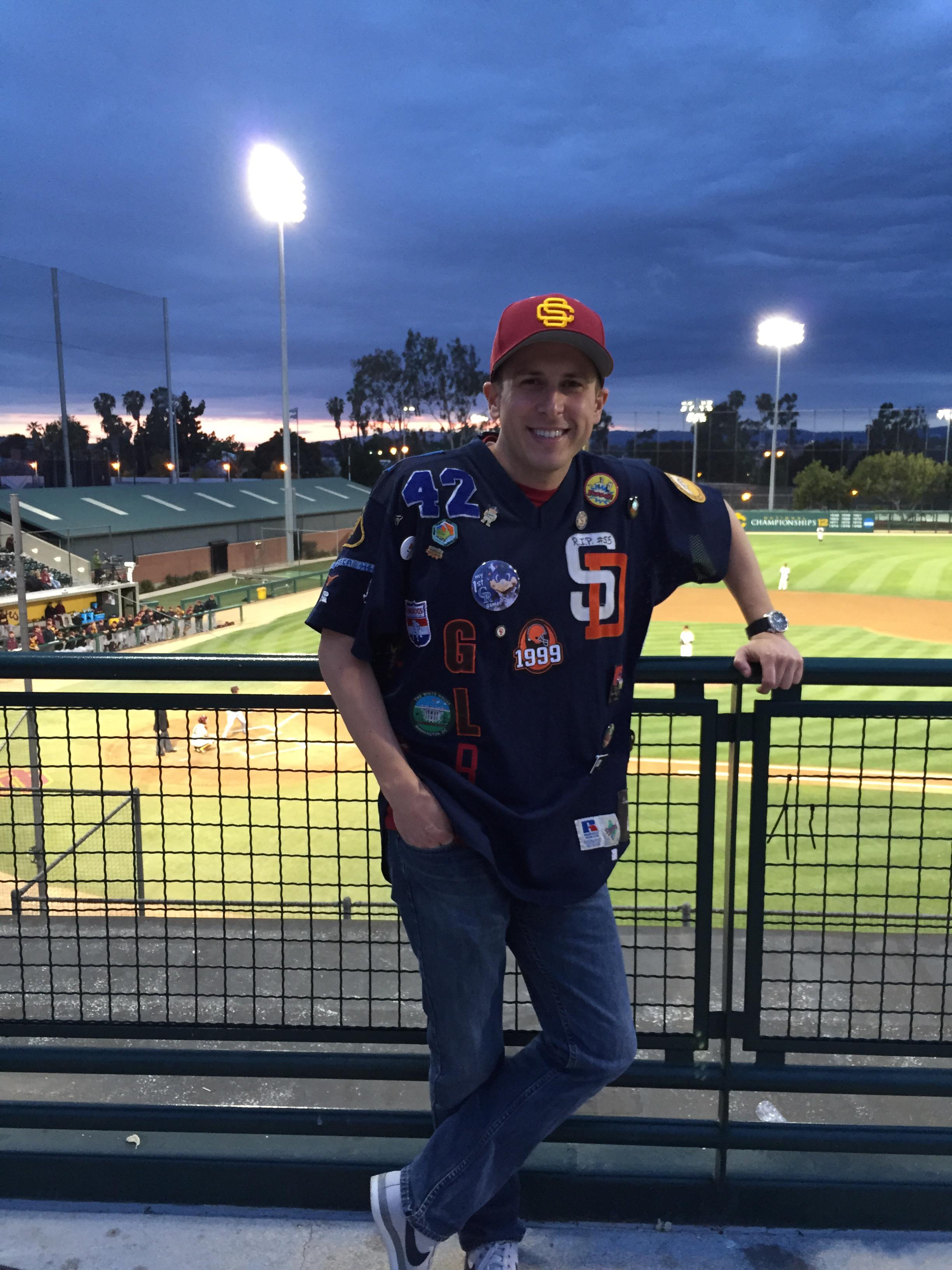 I know, the Padres were in LA on this night and I missed them. I had a very good excuse, though. When I had the jersey last I took it to USC but baseball season had already concluded for them. I also affixed the Tommy Trojan logo to it so it made sense to head to Dedeaux Field for USC's final homestand. Unfortunately they lost this game but they ended up winning the next two, qualifying for the NCAA tournament for the first time in 10 years.

After the game, I bolted to the dugout to snag a photo with USC's star catcher and San Diego native Garrett Stubbs. I had met his family earlier in the game and they wanted to see him wear the jersey! 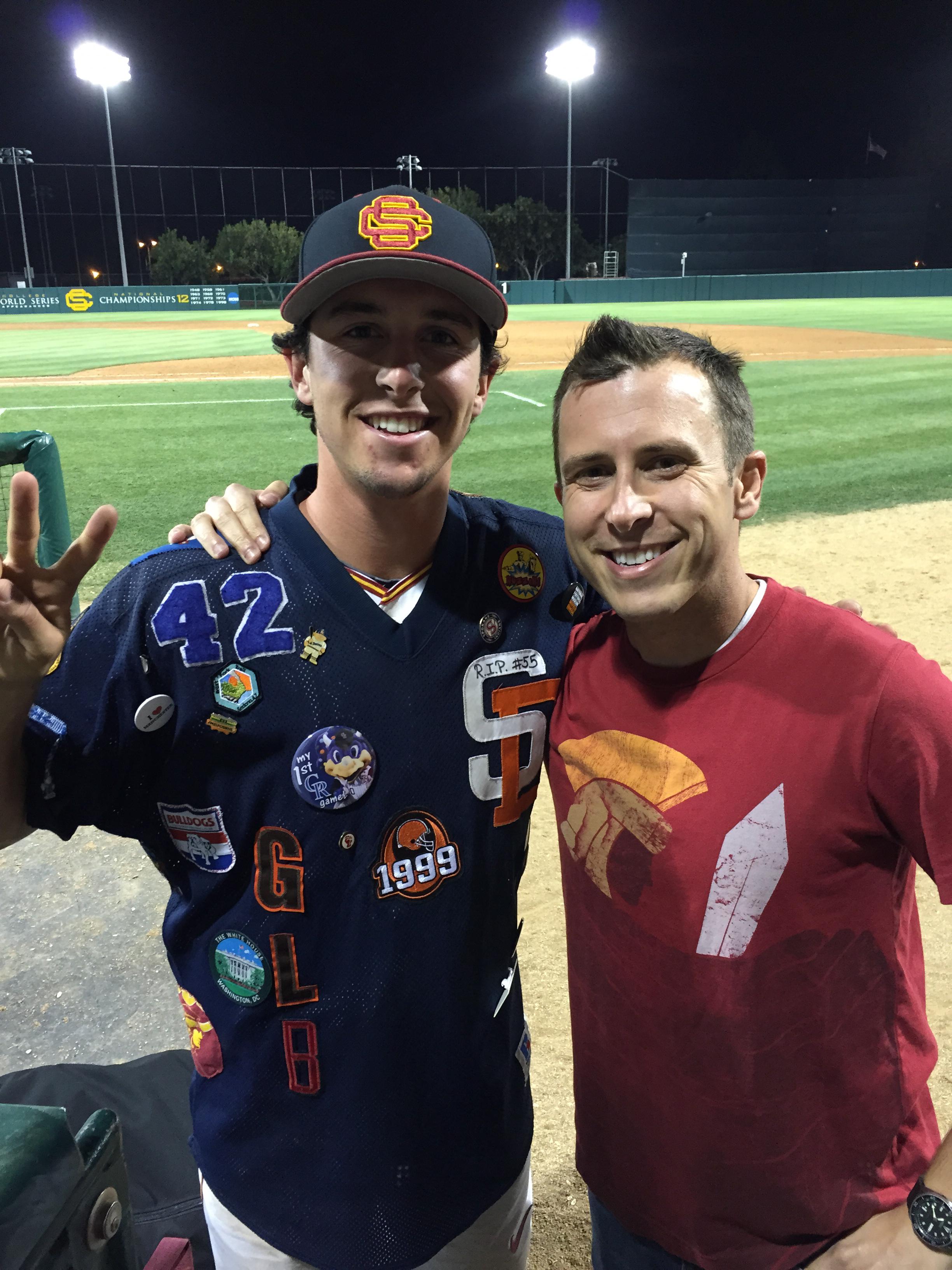 Garrett was incredibly nice allowing me to basically accost him after a rough game against ASU. I gave him a brief explanation about the jersey, he threw it on, and we got this marvelous photo. In the next few weeks, the following would happen to Garrett:

Look, Garrett is definitely awesome but can we agree that adorning that jersey might have had some bearing on how all of the above happened? That thing is MAGICAL, people!

With the Padres in LA, I of course was going to head to Dodger Stadium next. 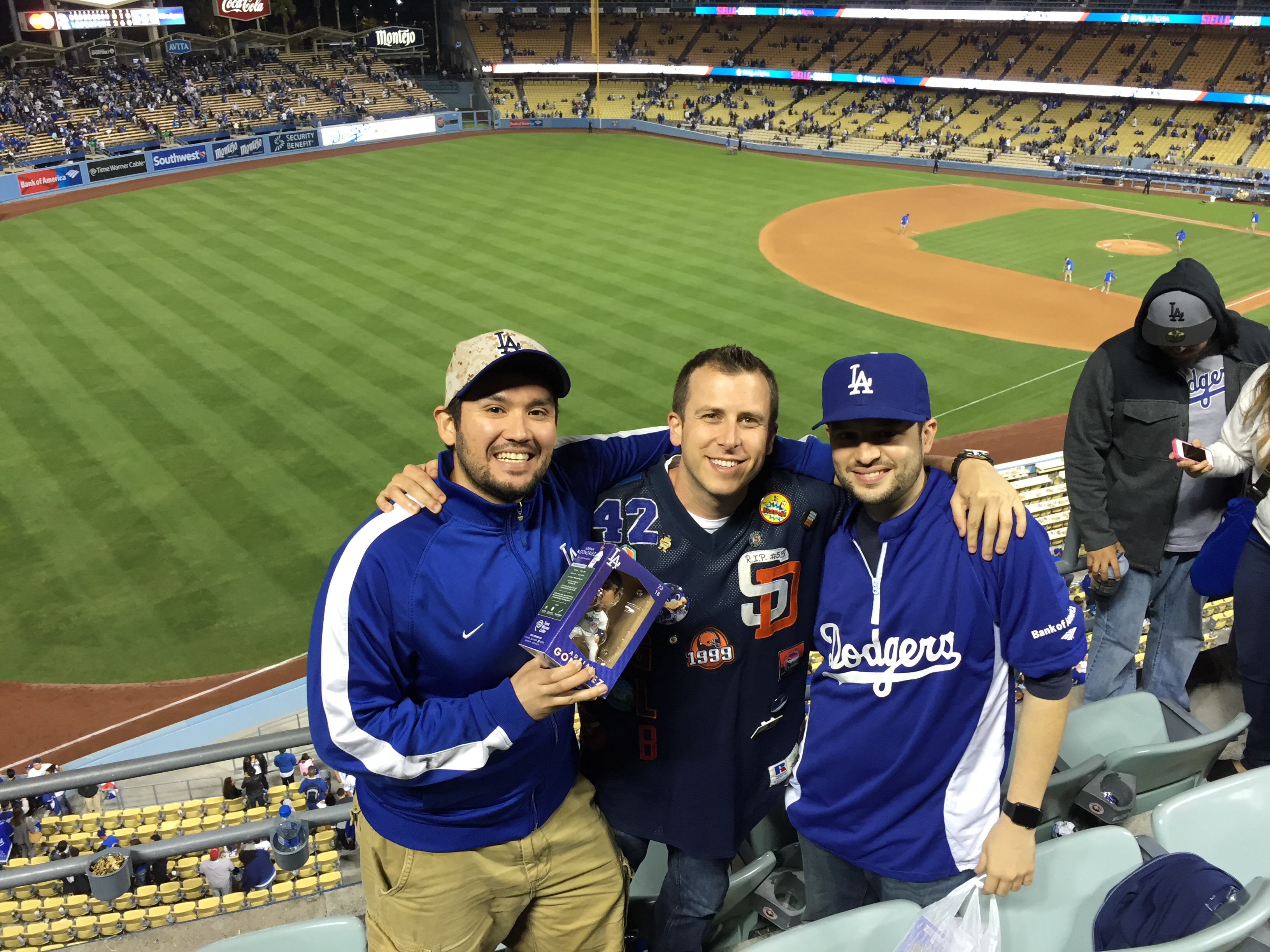 Three bros and a bobble

The jersey's powers weren't on display for this game. On Adrian Gonzalez bobblehead night, the boys were limited to 1 hit and were shutout 2-0.

But that's OK, because one of the beauties of baseball is that there's always tomorrow. I showed up for the afternoon game in a fighting mood. 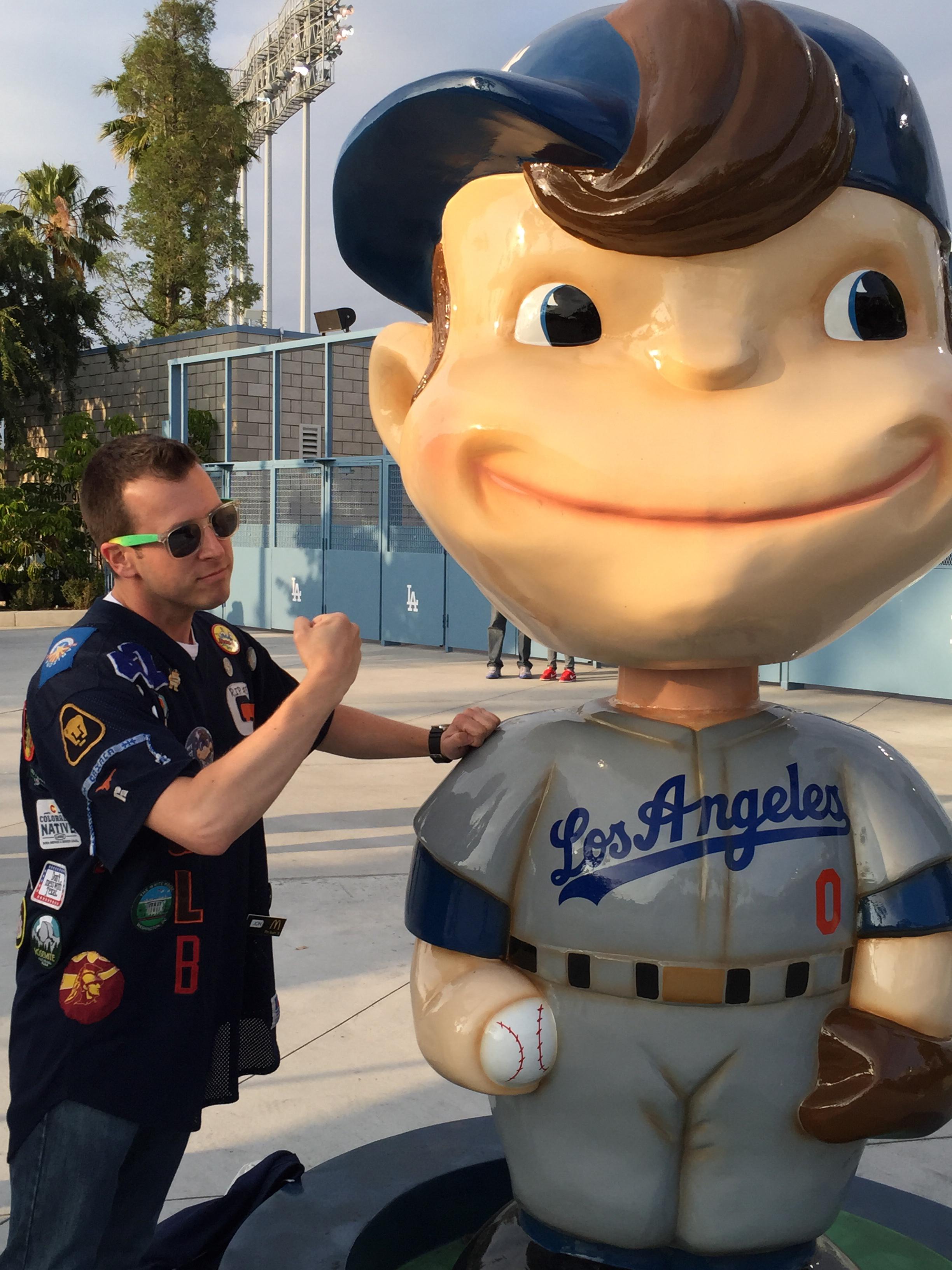 What are you smiling at?

This game would have much more to cheer about. Justin Upton hit a grand salami in the first inning and the rout was on. Final score: Good Guys 11, Other Guys 3. 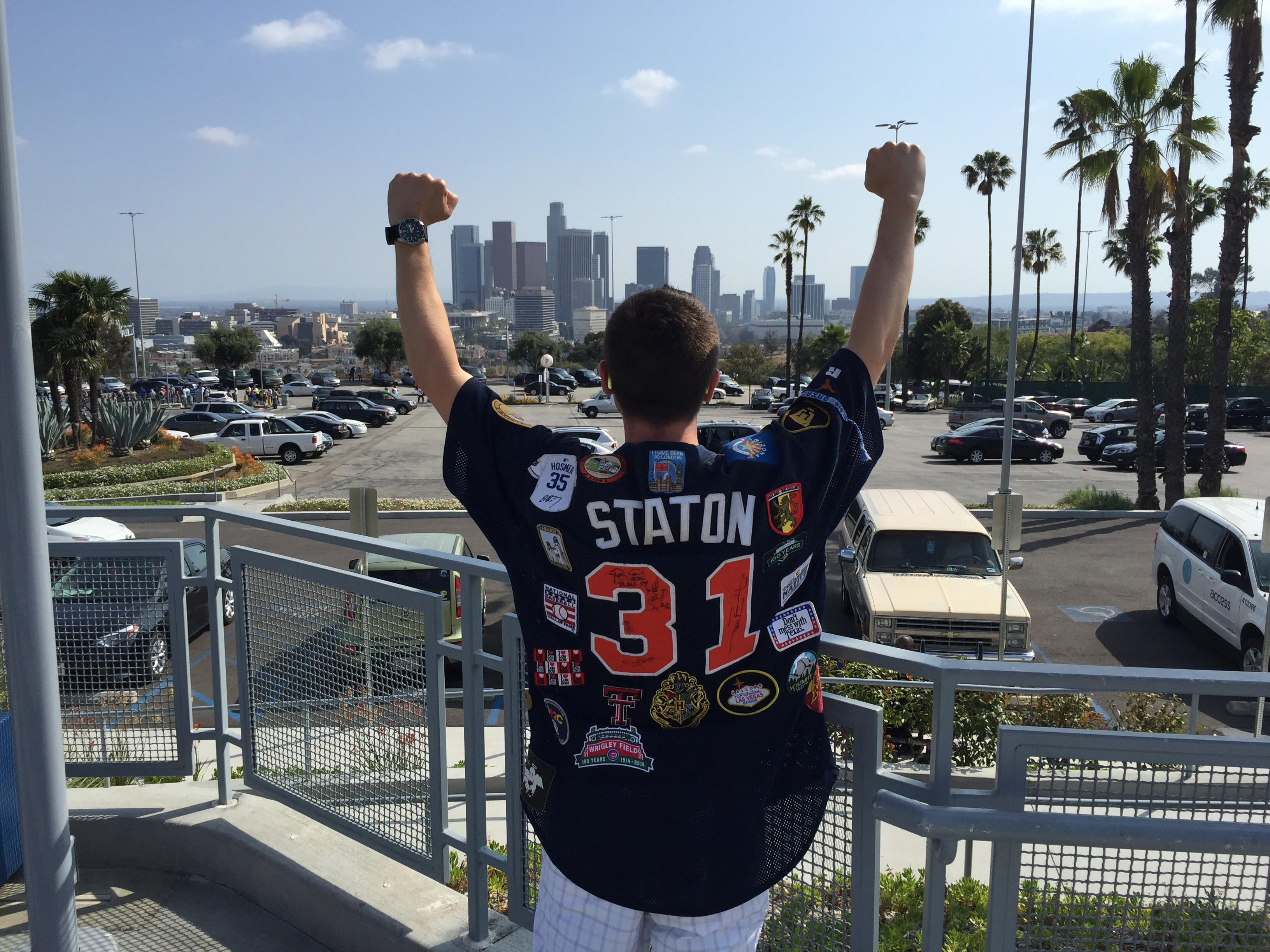 You'd think by this point I'd be a little tired with baseball, or I might have had other plans, considering it was Memorial Day. Well, you'd be very, very wrong. Baseball took precedent and I made the trek from Hollywood down to Anaheim for the first game of the series against the Halos. I hadn't been to the Big A since I was maybe 10, so I was excited to check it out for the first time as an adult. Also, a lot of fans from SD would be going to the game and it's always good to see some friendly faces.

A lot of us met up at Noble Ale Works, which is just outside the stadium. I recommend the Naughty Sauce. 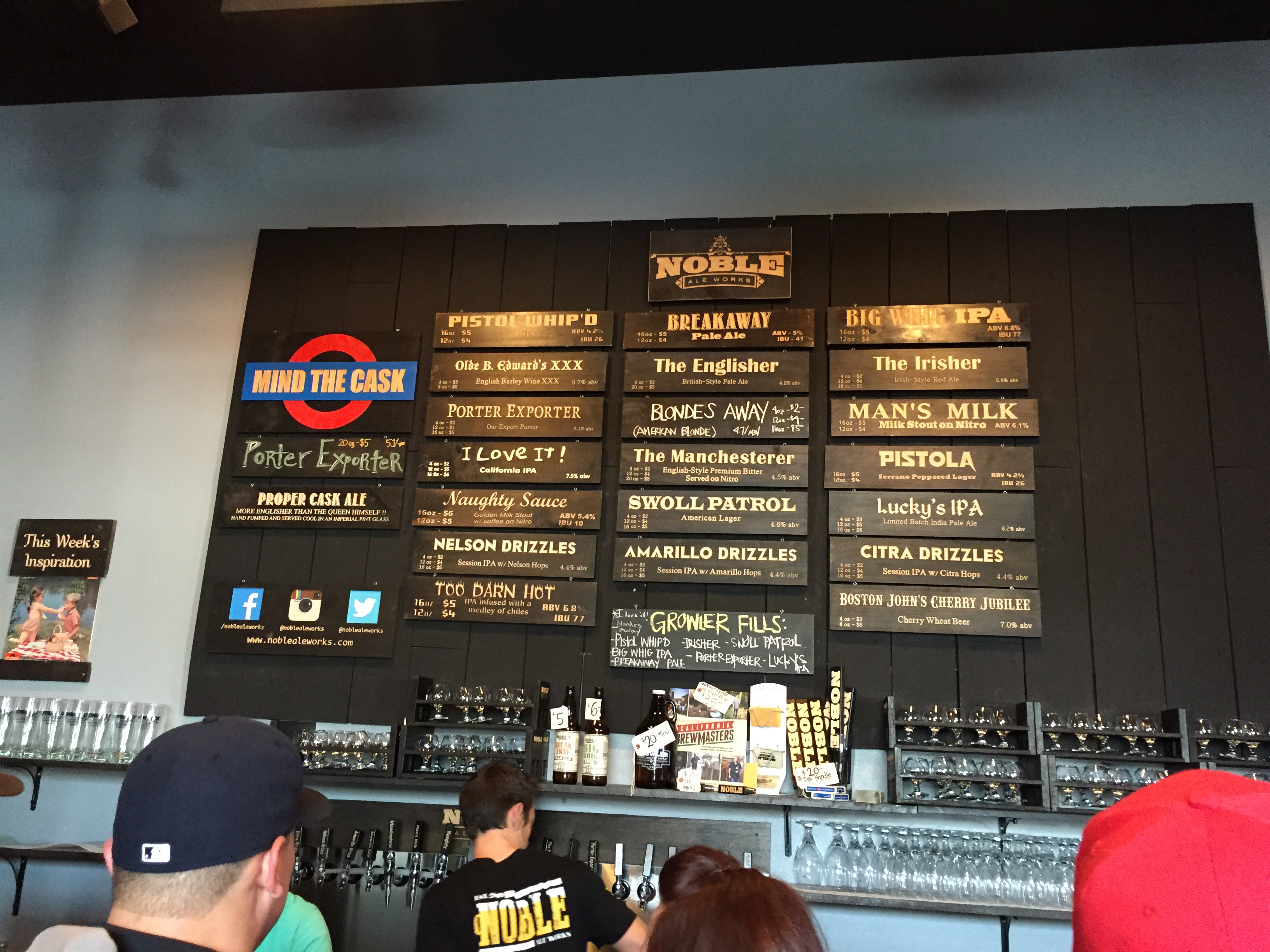 Here's one of the aforementioned friendly faces, Chris (@sportsbrain). He was actually in Anaheim to see the Ducks, so it was mad crazy in Anaheim with two sporting events going on in such a close proximity. Peggy (@thepegisin) is the one giving me bunny ears and that's OK. 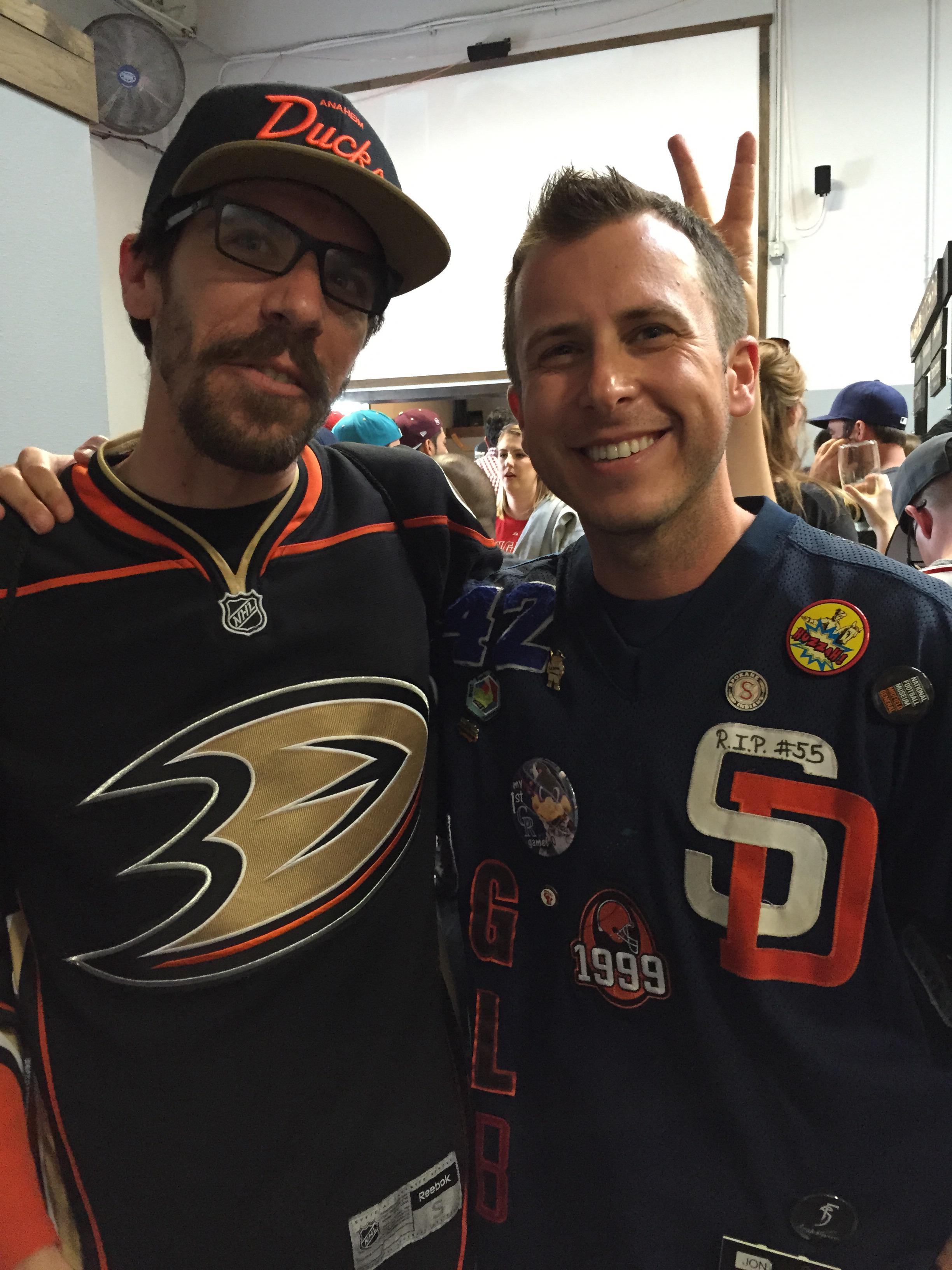 After the jubilation of the Sunday game, the hope was for that to continue in the next game. Some of that was maintained because I got to see some fellow GLBers. Here I am with IPuttheYinTony, who had the jersey back in 2012 as well. 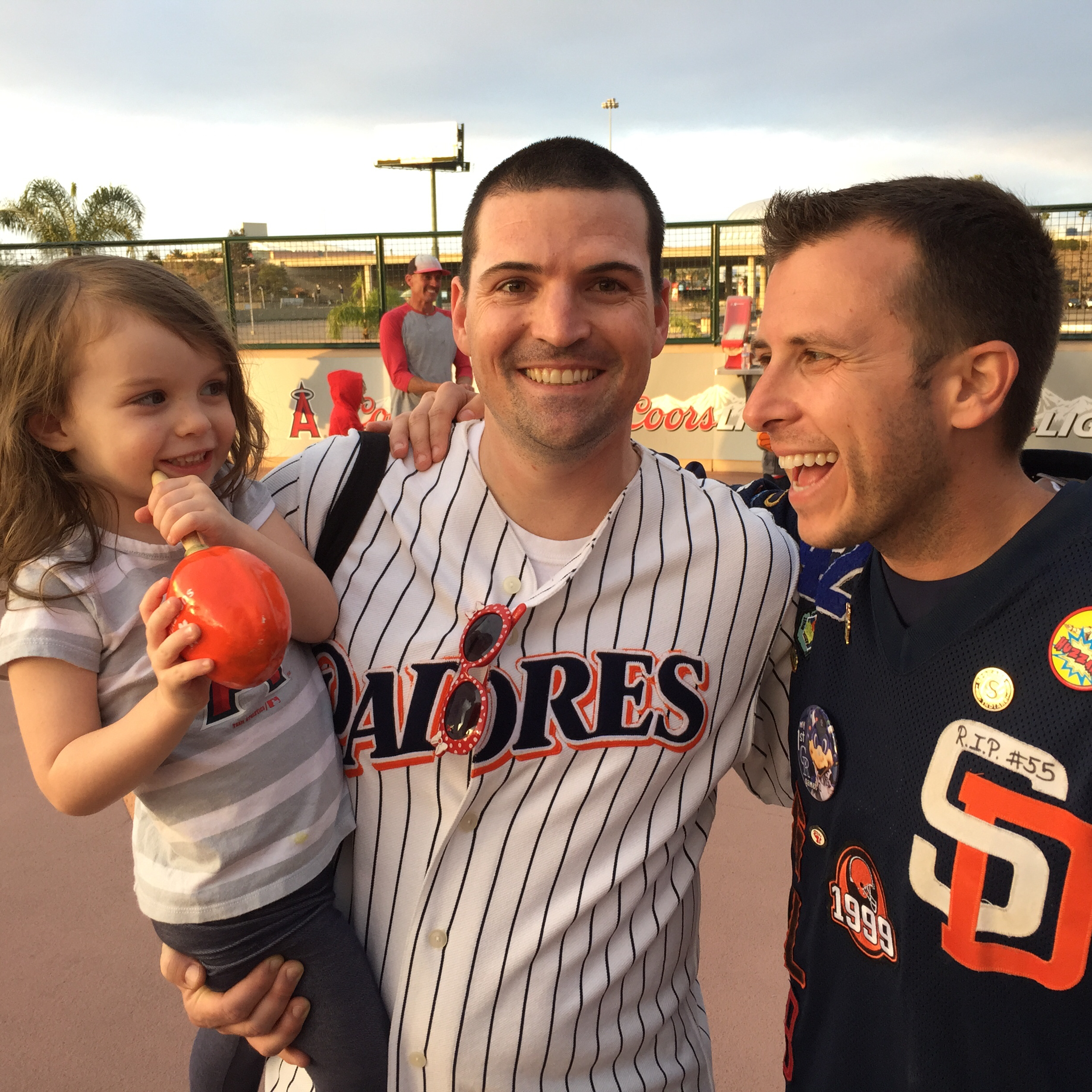 Some guy named Richard was also there. 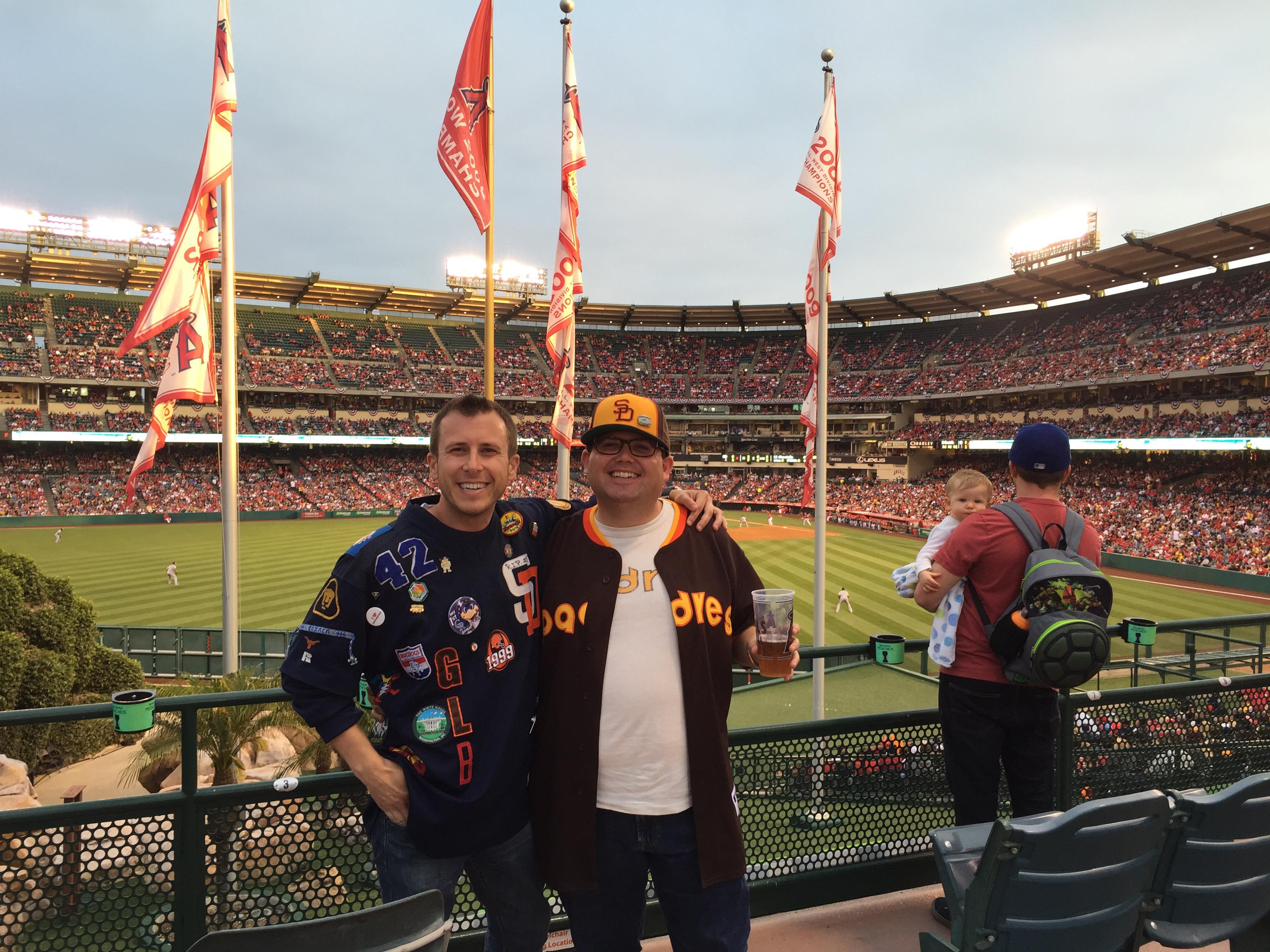 One issue with wearing a jersey with so much decor on it, you basically become a walking sculpture and people are checking out all your angles. I got very used to being told to stand still and get examined. 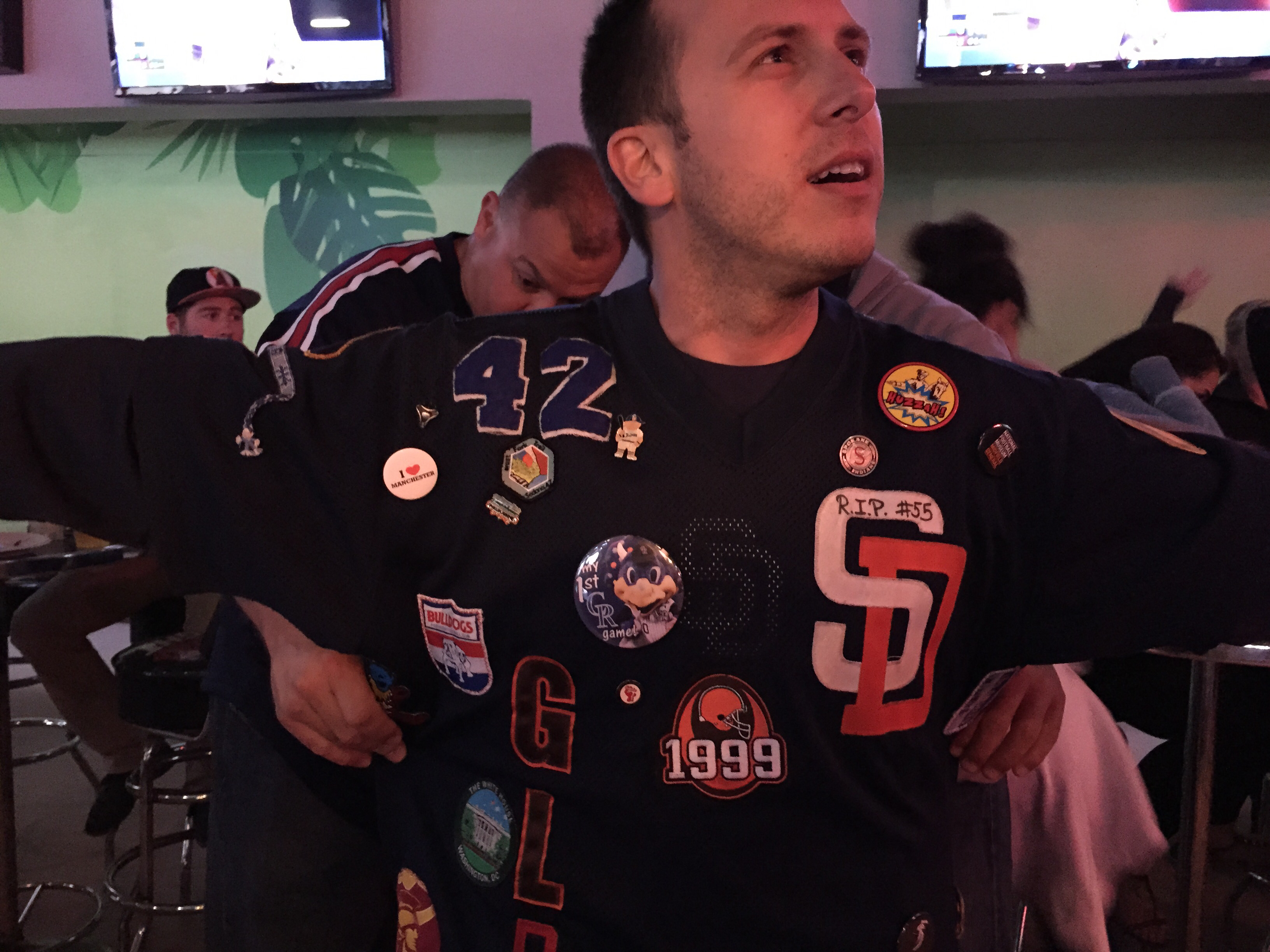 As for the game, the boys fought valiantly but lost on a walkoff hit courtesy of one Albert Pujols. There was fireworks after the game, so that was something. 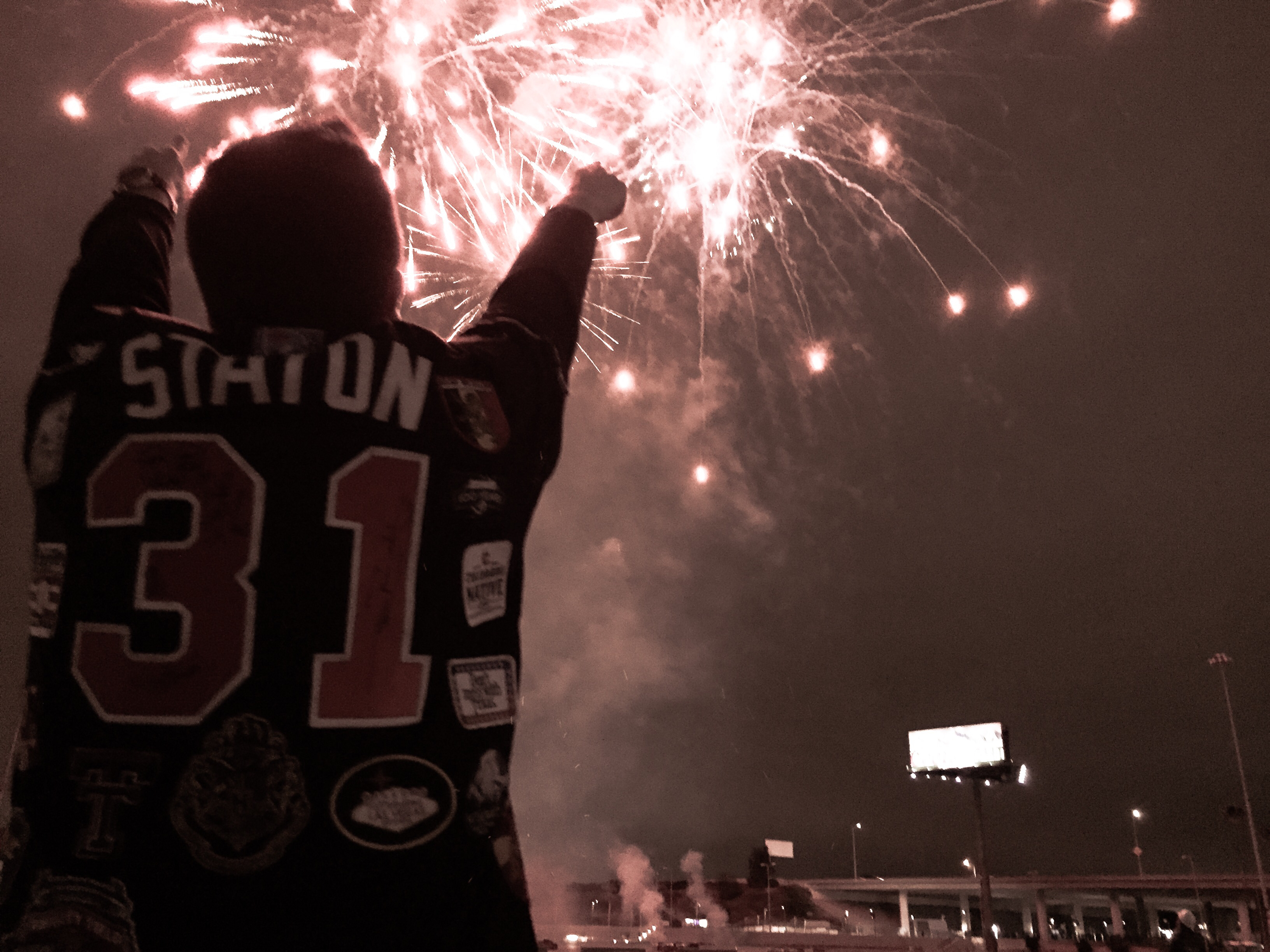 Yes, I used a filter

I TOOK THE DAY OFF FROM BASEBALL AND DIDN'T GO TO THIS GAME. I KNOW, RIGHT?

My games in a row streak ended on Tuesday, but I was still down for the final game of the series against the Angels. My college buddy Ben works in Orange County for the famed craft brewery, the Bruery, and hooked up tickets. I love Ben and I love the Bruery, so that worked out well.

The seats were freaking phenomenal. Check out this view of Kimbrel: 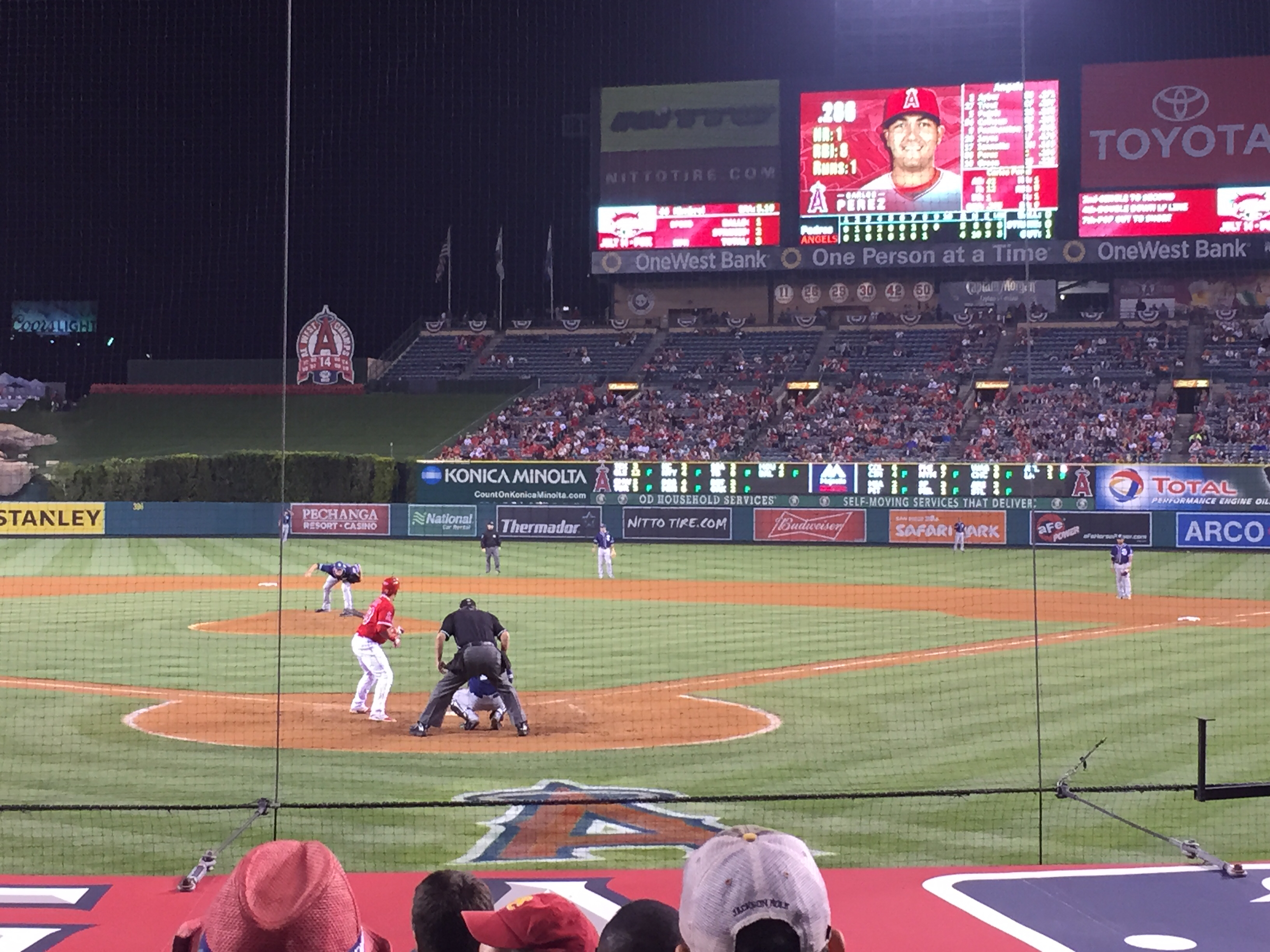 The Padres were victorious on this night, with the final out coming on an OF assist from Matt Kemp. Here's me, Ben, and our other buddy Adam smiling wide. 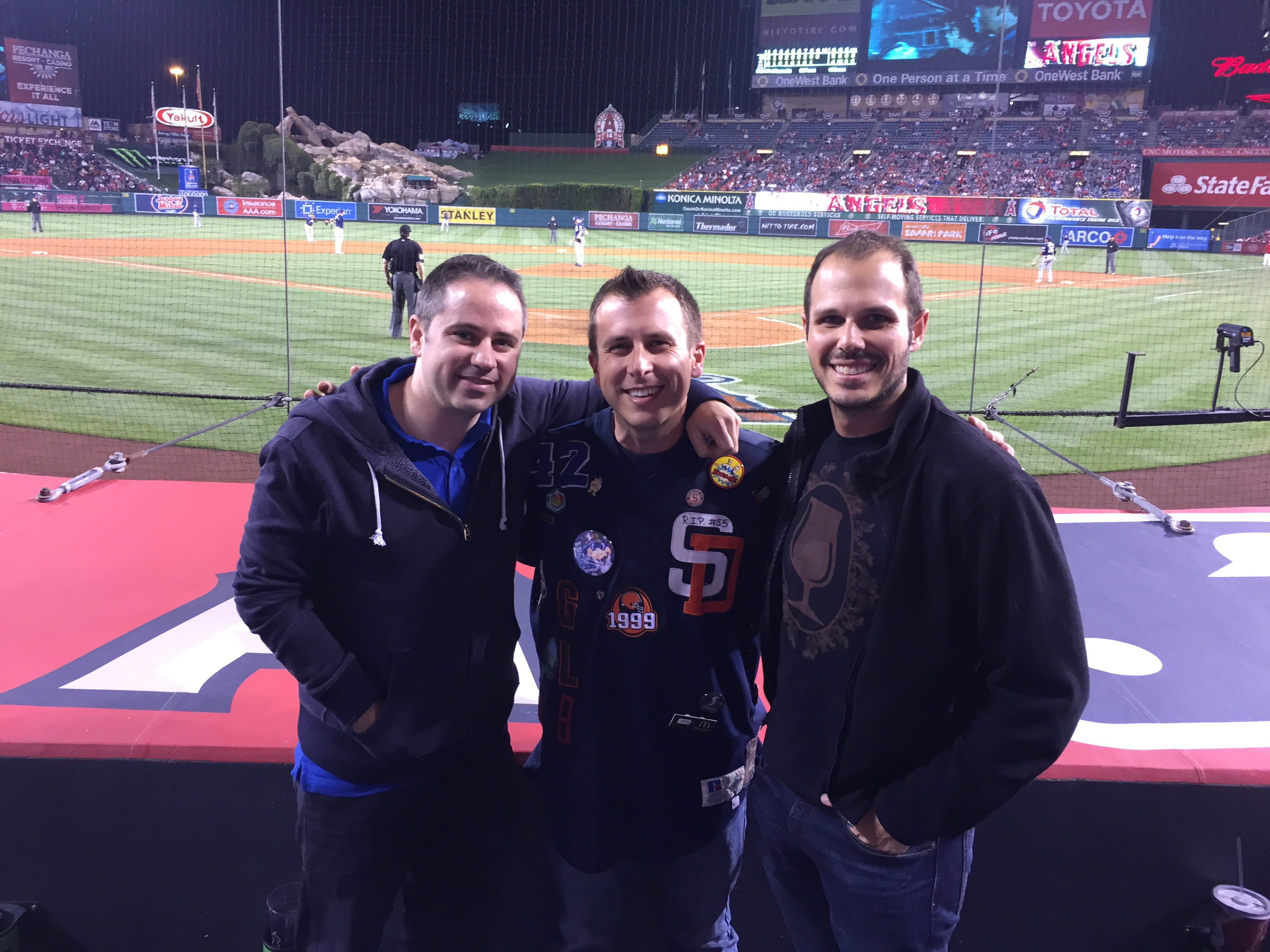 The jersey then lay dormant for a couple weeks before I made my way back down to San Diego. It became a great conversation piece at my apartment.

We have now hit 4 different stadiums with the jersey! This was actually my first trip to Petco this year. I went with my parents and we had an early dinner at Club 19. They have Sculpin on tap and I really liked this metal replica of Tony Gwynn's stats. 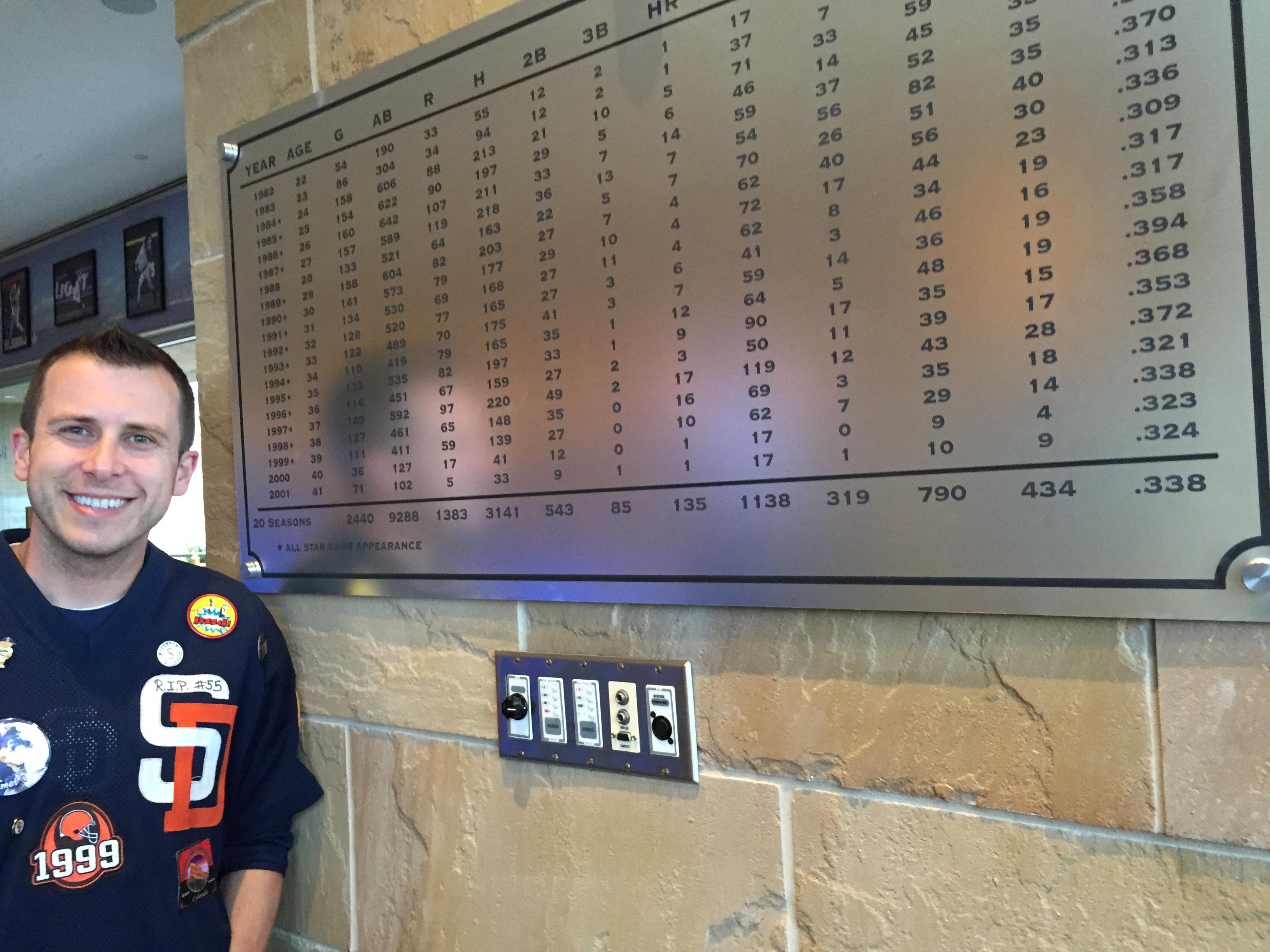 That career batting avg, tho

Just like in Anaheim, it was great to be in an environment with fellow Padre fans, something I hadn't really experienced much of this year. So many more people stopped me to check out the jersey, and every time I told them the story they would be wowed by it. Walking through the Park at the Park, a stranger yelled to me: "that's a dope-ass jersey, bro!" In the bathroom, some guys asked if my last name was Staton.

The game was very exciting. Clint Barmes and Derek Norris hit HRs to give the Padres a late lead over the Dodgers, but the bullpen couldn't hold it and LA stole one. I went to say hi to jodes, who put several GLB pins on the back of the jersey. 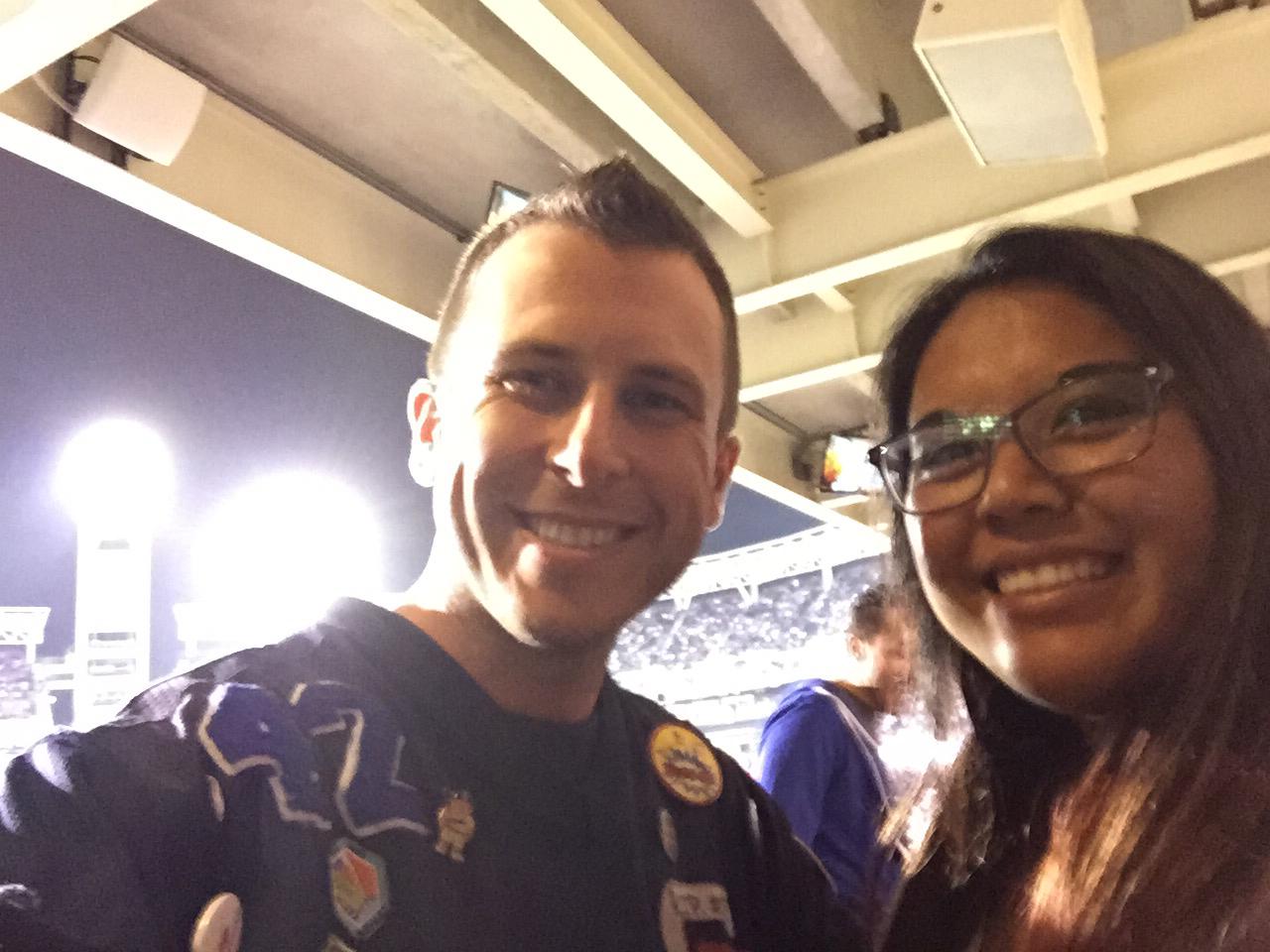 The next morning I drove over to Jonny Dub's house and dropped off the jersey, which now has two new patches on it (thanks to my mom for sewing them on!).

This first one is from Melinda, who had the jersey before me. 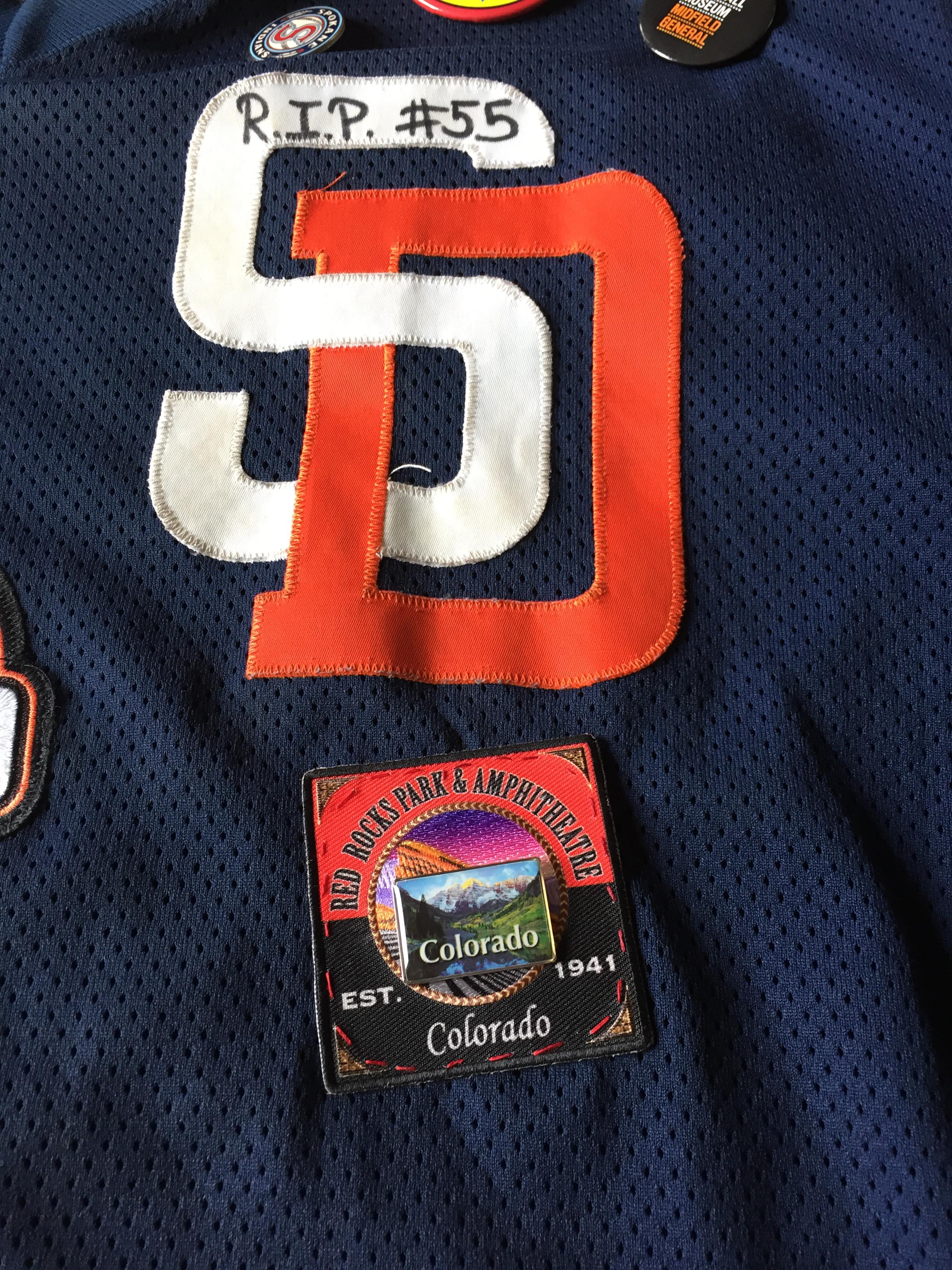 And of course my next jersey addition would be about beer. Ben gave me this awesome patch from the Bruery and I had it placed next to the USC one I previously put on. 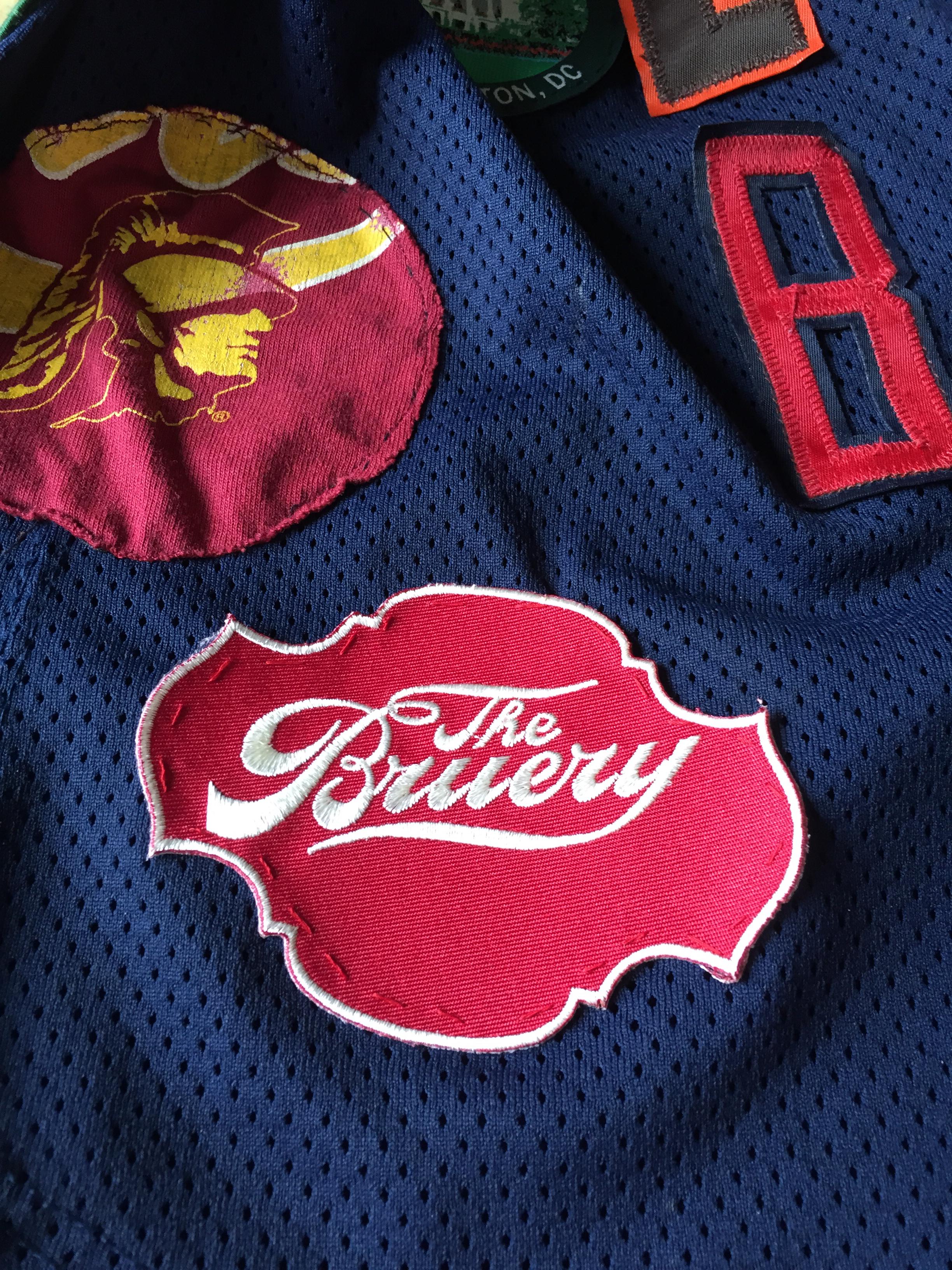 This corner has two of my favorite things

And with that, it's on to the next person. Take care, jersey. I'll miss you.

To see more photos, check out my album here: http://imgur.com/a/2r2BV