Matt Kemp on Carlos Quentin: I used to be like "eff this guy", now I'm like, "BFF this guy"*

*not an actual quote.

Here, hold this in your head...

Once upon a time, when Carlos Quentin was thinking about ways that he could injure himself and Zack Greinke was thinking about how badly he wanted to ruin Carlos's pretty face with a baseball and both of them were thinking how manly it would be to behave like bucking stags with a bunch of sexy does in the crowd oohing and awing over them, they faced each other in a baseball game and this happened:

Carlos Quentin, fragile porcelain vase of a man that he is, was remarkably unharmed. The little skinny dude on the mound (the one that bounces off of Carlos Quentin in the gif), broke his collar bone.

And for a while, everybody hated the Carlos Quentin, which is fine, because what the world needed at that moment in history was even more anger.

Which is what they got in the parking lot when this happened: 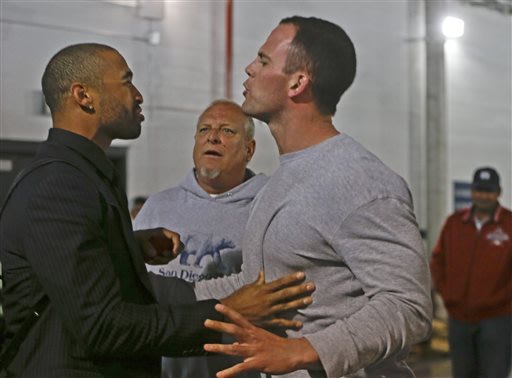 That is not a picture of a sexy underwear model wearing a leather backpack, performing a CBE on a crew cut body builder while her elderly father, who works at the polar bear exhibit at the zoo, looks on in concern. It is in fact, Matt Kemp, backing up his team mate by further instigating some junk with Carlos Quentin who's somewhere not in the picture, while Clayton Richard does his part in trying to diffuse the situation by flexing a lot.

In any case... All that's to say, that time heals all wounds and Matt Kemp has had his day with Carlos Quentin and Marty Caswell Bud Black was there to inform Marty Caswell that he watched them bury the proverbial hatchet while Matt Kemp was maybe overhead to say something like, "I used to be like 'eff this guy', now I'm like 'BFF this guy'". And while the feelings maybe aren't quite that strong, they are strong enough so that when Quentin is updating his LinkedIn, looking for a job where he's not the 6th outfielder on a team, he can safely count on Matt Kemp's passively vague recommendation.