Rockies get Stultsed by Padres; SD Win Streak at 5 after 1-0 victory

An Eric Stults gem blanks the Rockies and extends the Padres' winning streak.

Share All sharing options for: Rockies get Stultsed by Padres; SD Win Streak at 5 after 1-0 victory

No matter which way you slice it, this has not been the best year for Eric Stults. Not only has he piled up more losses, a higher ERA and more walks and hits per innings pitched than last year, but he is also on pace to pitch significantly fewer innings that 2013 when he topped 200. Despite all that, sometimes you tune in to an Eric Stults-started game and catch one like this. He is savvy and he is battler and some nights he keeps guys off balance enough to whiff his fare share and shut down the offense overall. Today was one of those days. When he has one of these days I like to say: 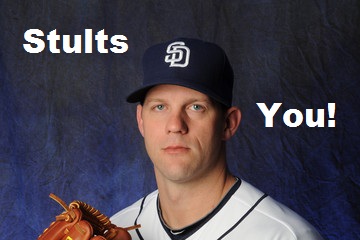 I don't know exactly why I like to say it, but maybe it has to do with Stults' success being so improbably based on his repertoire that you just want to yell it at the opposing fan as an insult to their team. Actually, there is video somewhere of me doing just that to visiting Angels fans back in 2012 when Stultsy recorded his first ever win for the Padres.

The Padres didn't provide much wiggle room for the Rockies to get Stultsed. They did provide it early though. In the first inning after a Jedd Gyorko walk possible team MVP Rene Rivera gapped a 2 out double to drive in the second year second sacker. That duo tried to help out some more in the 6th when Gyorko walked again and Rivera singled. Yasmani Grandal would walk as well to load the bases with 1 out, but rookies Tommy Medica and Rymer Liriano each flailed unsuccessfully and struck out to end the threat.

The one issue with Stults' craftiness on the day is that it took a lot of pitches to get through 6 innings. That led to him getting the hook in the 7th after an out and a single. Fortunately for him, the bullpen is well set up to preserve a tight one like this. Nick Vincent kept his runner stranded. Dale Thayer danced between the raindrops to keep the shutout intact. And, despite a pinch hitting appearance by Padre-killer Wilin Rosario, Kevin Quackenbush closed it out for his 6th save of the season.