'Round the Bases: Week 3 of September

(9/14 - 9/20) A weekly roundup of Padres performances. This past week has been much kinder for the Friars. Taking a 4-game series against the Phils and playing spoiler for the Giants.

Share All sharing options for: 'Round the Bases: Week 3 of September

With the season already starting to wind down having eight games left and being eliminated from playoff contention; the San Diego Padres are once again left with the antagonist role in Frisco's playoff race. And antagonize them we did. But not before leaving the desert with a loss off of the Diamondbacks to return for our final homestand of the 2014 season, the Padres blasted through the Phillies, outscoring them 15-12 with a two-hit shutout from Andrew Cashner.

The brown was brought back and the Friars ended the calander week with a series winning game against the Giants, the result of an O-Des shutout, followed up by being manhandled by our beard-n-mullet'd Ca$hner in more ways than one. 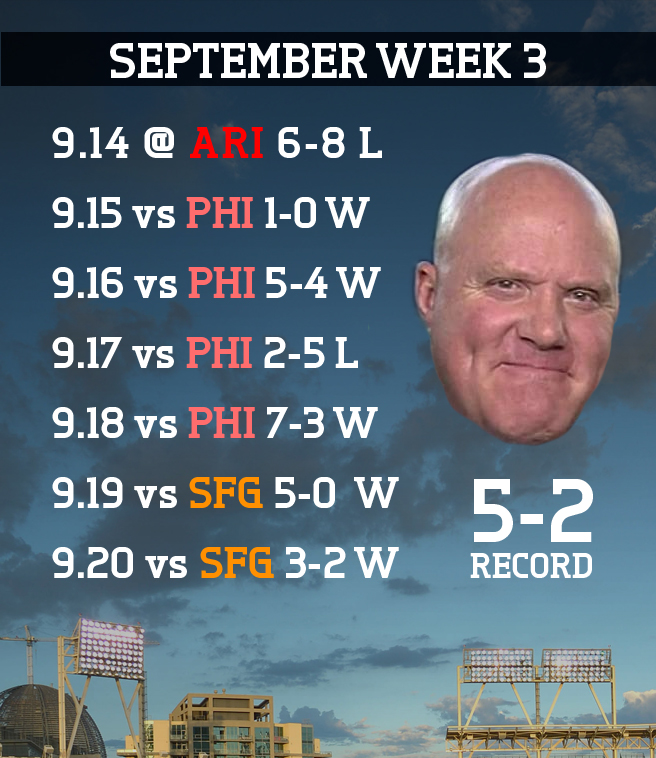 On Wednesday against the Phils, Cashner was looking hot. For somebody plagued by soreness mid-way through the season he has been coming back firing. Cash keeps flirting with no-hitters every other time he's on the mound. He posted his 17th start with two or fewer runs at home. Nobody in Padres history has been that hot at home, not even accounting the fact that it was 90°+ all week.

Another arm dealing flirting with the disabled list, Robbie Erlin went for 6 good innings only giving up one earned run. He didn't give up any walks, and threw more fastballs than anybody all week, which he kept at a low average at around 89 MPH, right around where junk-tossing Despaigne throws. He replaced Tyson that night who also suffered from that late-season soreness, and did a damn good job and will have another start next Tuesday against Colorado.

A game not only capitalized by the monkey-wrench nature of a win against a WC-hunting NL West rival, but elevated by a return-to-form outing from the O-Des. Throwing seven shut-out innings, Despaigne fought hard for that 0 on the board, dealing almost 60 strikes in about 100 pitches. Dishing out a 62 and 68 MPH Eephus, the latter to strike out Pablo Sandoval and end the 1st inning with RISP. O-Des threw hard, and his offense backed him up with 5 unanswered runs from the likes of Little Ninja and Daddy Longlegs.

This season the Little Ninja has had to go from a lovable off-the-bench position player to total pint-sized heartthrob at shortstop, a baseball title we're apparently taking literally now. From leaping catches in the outfield, to clutch RBI's, to diving run-saving plays, it's really no surprise he has been populating almost every single weekly recap I've done. This week, though, he was on fire.

He has played over 6x as many innings at SS compared to 2013, and is showing the faithful that he can cover for Everth Cabrera, who has missed basically a third of the season now from injuries and antics. It's Amarista's on-field antics that are earning him an extra prefix to his title for Super Little Ninja.

Cashner still a nightmare at the plate

It's becoming more and more difficult for Cash to hide the fact that he's obviously splitting some of his duck hunting schedule for more time at the batting cages. In both of his starts this week Cashner has been absolutely physical in his plate appearances. His showcase last week against the Dodgers resulted in him reaching third base.

This week he hit the game-winning RBI in a two-hit shutout against the Phils, and ripped a triple off of Yusmeiro Petit (not before drawing a walk in his first at bat off of Petit, who previously had only given up 1 walk in all of September).

In San Diego our pitchers do it all.

Seth guns a Byrd down in public

Something I've loved watching all season is opponents trying to run up on Seth Smith. At the beginning of this month Corey Dickerson got to feel Smeth's wrath. Earlier in the season Joey Votto felt the Smethxy experience as well. This week Marlon Byrd learned all about Seth's college-quarterback arm when trying to tag-up a shallow fly ball. Lesson learned, Professor Smith.

This month the Gyork' has been leading the club in a lot of ways. Plate apperances, BABIP, AVG, WAR, and has finished the most double plays in the entire league like it's his signature wrestling finish. Defensively this season he hasn't had too much opportunity to shine with the second-fewest innings played out of all qualifying second basemen, but when he is out there at second he sure knows how to put on smooth defensive action. The Gyorkstore has the right to refuse service, and Jedd exercised that right all week.

And some bonus moments from the week:

Liriano trips in the desert

After Rymer is left a little bit excitable on a wild throw past first base, he takes off for third. Not before being embarrassed in front of his whole team.

Notorious speedster O-Des helps his own cause after a rocky start to record the first out of the inning. It was a clean dive, and luckily Despaigne's face caught the fall for the rest of his body.

Returning to Petco Park the first time since the heart-crushing news hit Tony Gwynn Jr. and the world of baseball, fans give the former-Friar a warm welcome. Something that Phillies fans wrapped Gwynn Jr. up in on his first plate appearance after that day.