Padres give drums to monks in Right Field, some fans annoyed

Share All sharing options for: Padres give drums to monks in Right Field, some fans annoyed

After a Beerfest bathroom break last night I suggested we stop by the Right Field Mission where the Dancing Friar and his Merry Monks get crazy at just about every home game.  They're an interesting group of fans, who take Padres fandom to another level by donning robes and becoming friars. They perform chants, cheer and generally root for their team in a very extroverted way.

Look, if we're being honest, sometimes when you're among them you're not sure if you're at a baseball game or in a mental ward.  They're that crazy, but I sincerely like that about them.  Baseball can use a few more characters, but make no mistake they stand in stark contrast to the those who mildly sit in their seat and munch on Cracker Jacks, like me.

When we arrived in their section, we saw and heard something new and novel.  The friars had drums.

Hanging with the right field mission. They now have drums! @DancingFriar

For those that don't know, instruments aren't normally allowed at the ballpark.

Musical instruments or any type of noise-making device may not be brought into PETCO Park. Any exceptions will be at the discretion of the San Diego Padres.

But this was a special case.  We were told, and as you can see in the tweets below, that Padres Marketing VP Wayne Partello and the Pad Squad brought the drums to the Right Field Mission and presented them to those in robes prior to the game.  The only rule set for them was to keep the drums quiet while the batter was in the box.

@Padres drum their way to victory last night and beat on #VaGiants con mas ritmo! Thanks @WaynePartello You get us! pic.twitter.com/gyPVSI577u

@WaynePartello we are simply amazed!! 5runs!! @Padres show #RFM some love tonight as #PadSquad supplied us with luv pic.twitter.com/6qpMKE4ypj

The monks were banging the sh_t out of the drums for the entire time we were there.  Sometimes it was done in rhythm with the score board music, sometimes timed with the claps of the crowd and most of the time at random.

Security arrived shortly after us.  Fans were complaining and wanted the friars to take a vow of silence.  The monks of the mission dropped Wayne Partello's name and after a few radio calls they were allowed to continue, much to the dismay of the annoyed fans.  At one point another Padres employee begged them to use their new toys  sparingly.  The speech didn't go over well and didn't seem to have much of an affect.  We left shortly thereafter for unrelated reasons.

Today I got some text messages from a fan sitting in right field. 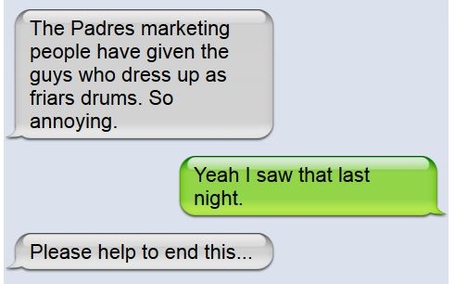 When fans sitting in right field are annoyed by noise that tells you something, because they sit in the noisiest section of the ballpark.  Not only are the fans rowdier but the PA system WILL create hearing loss.  It's unbearable to sit there for long.  I had to leave my seat earlier this season because of the jolt each song would give my innards.

@kevhilge I notice my voice is raw after games from trying talk over music. I almost lost bowel control in right field, seems louder there.

I wasn't really bothered by the drumming while I was in attendance yesterday, but I rarely sit in right field, for the reasons stated above and I knew I wouldn't be there long.  If I had season tickets in that section I can totally understand the annoyance.  Handing out instruments to non-muscians rarely ends well for the listener.  I like the effort by the marketing department.  I want to see fans participating but maybe the friars stick to dancing, they've got a good thing going there.

@gaslampball players loved it. A few fan complaints and an equal amount that stopped me when I was out there to say they loved it.