Share All sharing options for: Area around Tony Gwynn statue restored, footprint of Fox Sports set has been re-sodded

I've made my feelings pretty clear since the beginning about the area around the Tony Gwynn statue.  I was never a fan of the Fox Sports San Diego set encroaching on the monument.  The set limited fan access and degraded the scenery around the focal point in the Park at the Park.

When Tony passed away, FSSD rightfully removed the set, giving the area back to the fans as they mourned the loss of the Padres icon.  Since that time, FSSD moved their SD Live set to their backup location in left field.  Fans, however, didn't know if the move was temporary or permanent.  FSSD didn't either, as it was still being debated internally.

In the weeks after, as the powers that be at FSSD mulled over returning to their roost upon the grass knoll, the fans spoke out, declaring their love for the left field location, with only some gentle prodding from yours truly.  I can tell you that FSSD heard you, loud and clear.

But since FSSD didn't make an official announcement about the new set location becoming permanent and a large dirt footprint was left where the old set once stood, I was worried they'd eventually move back. 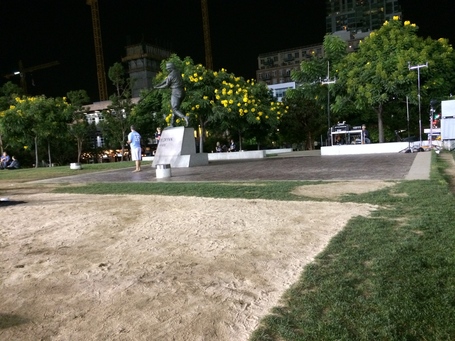 In an attempt to push the issue and get the area restored and re-sodded, signalling an end to the FSSD occupation I tweeted the Padres' head groundskeeper.

@gaslampball @FOXSportsSD Comic-Con doing more damage now,I hope we can re-sod around the Gwynn statue after this busy week here @ the Park

Last week Jonny and I attended the game and we were stoked to see that Luke Yoder and his crew did indeed sod the area.  The area was still roped off, but this time it was allowing the sod to take root.

I can't tell you how happy I am with Fox Sports San Diego's decision.  They did the right thing and should be applauded for keeping their fingers on the pulse of Padres fans.  I tip my cap to them and send my sincerest thank yous. 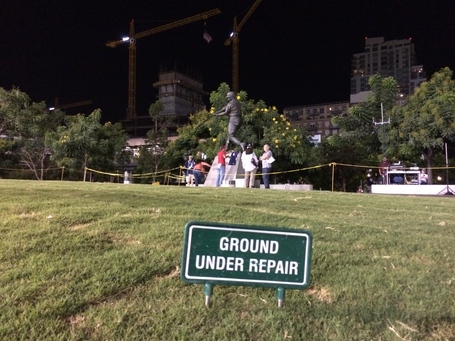 The one time I don't mind the area around the Tony Gwynn statue being roped off. #Padres planting new sod. pic.twitter.com/6sNGDKeUnp