Whose glove is Bud Black wearing on this card?

Share All sharing options for: Whose glove is Bud Black wearing on this card?

A couple days ago I wrote about Bud Black being traded to Toronto back in 1990. I have one card picturing him with the Blue Jays, so I dug it out to scan and pair with that post, but two things stopped me. Firstly, it was already written and tacking on a paragraph about a card would have been clunky. That in and of itself probably wouldn't have derailed me, but then something on the card caught my eye and convinced me it deserved a post of its own. Thanks to the headline, you already know what I'm talking about.

Bud Black was traded to Toronto 24 years ago today

Bud Black was traded to Toronto 24 years ago today

On the front of Black's 1991 Donruss card he is shown in his Blue Jays threads, although they did make note that he was a member of the Giants by that point. The glove he is wearing clearly has the number 21 written on it in black marker- a number Black never wore. Since it was a posed photo, not an action shot, I figured Buddy borrowed a glove from one of his new teammates for the picture. I looked up the Jays' full 1990 roster to see who hooked him up, and it turns out that the only player to wear 21 for Toronto that year was Greg Myers. You may recall Greg Myers from his days with the Padres. If so, you remember that he was a catcher. Strike one; on to the next.

From there, the next logical guess was that he got it from a former teammate, so I checked Cleveland's roster from that year. Sure enough, 21 was worn by a fellow left-handed pitcher, Greg Swindell. That seemed to answer the question but I wanted to make sure, so I did a Google Image Search. The first shot of Swindell showed him wearing a Mizuno glove and I thought I hit a dead end. However, as I scrolled down, shots of him wearing Wilson gloves started showing up. None of them were the same model or color, but it was enough to keep me on the case. I started narrowing it down by year and card brand; after a couple fruitless queries I hit paydirt. 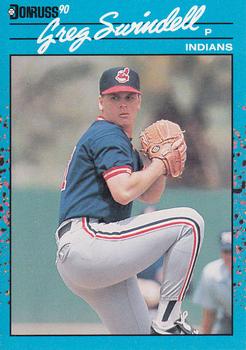 There it is. That's Swindell's 1990 Donruss Best of the American League card, and on it he's wearing the glove in question. While the question of "Who?" has been answered, the "Why?" of it all is still up in the air. Next time one of you is talking to Bud Black, do me a favor and ask him how he ended up with Greg Swindell's glove.