The Padres are the most hated team in Canada's Northern Territories

Share All sharing options for: The Padres are the most hated team in Canada's Northern Territories

Reddit's baseball sub has a topic about the most hated MLB teams in each of the United States and the Canadian provinces.  Yesterday I was sent a link to the Canadian map and was shocked to see that the Northwestern Territories look upon our San Diego Padres with disgust and loathing.  Instead of feeling insulted I was just happy to be noticed by those in the Great White North. 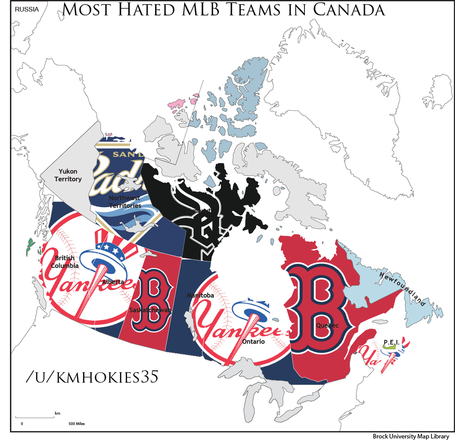 I think my favorite comment in the thread is from boringdude00.  Something about keeping warm with their burning hatred is so poetic.

@gaslampball That's odd. I live in Alberta & no one even acknowledges the Pads exist, let alone hates them. I'm questioning those results.

@gaslampball Ha! Once saw a Pads plate on a truck in Calgary & got excited b/c, yay, another fan! Took a closer look; it was my dad's truck.

I'd really like to talk to someone from the Northwestern Territories and try to find the root of their hatred, so chime in if you're from the region. Otherwise, let's theorize together.