Are you ever asked why you're a Padres fan? Is it a question that's usually accompanied by a smirk or a look of pity?

What do you say? Obviously, the people who have asked me this question usually don't know me very well at all, and instead of launching into a tearful monologue about Archi Cianfrocco or Scott Brosius, I just say something like "Well, I'm from San Diego" or "I'm an idiot".

It reality, the year that would cement my fanhood of the Padres into the foundation of my being was 1996. Before the '98 season when all my friends jumped on the Padre bandwagon and rode it to the World Series, I was a heartbroken Padre fan that couldn't get over the loss of one of my favorite players, Fred McGriff, who was replaced by Melvin Nieves, a name that still make me flinch.

I remember the year being filled with great plays and dramatic comebacks, usually listened to on my tiny radio when I was supposed to be asleep. Dancing around the room in my underwear as Jerry Coleman described another victory for the local boys was a pretty common occurrence that year. 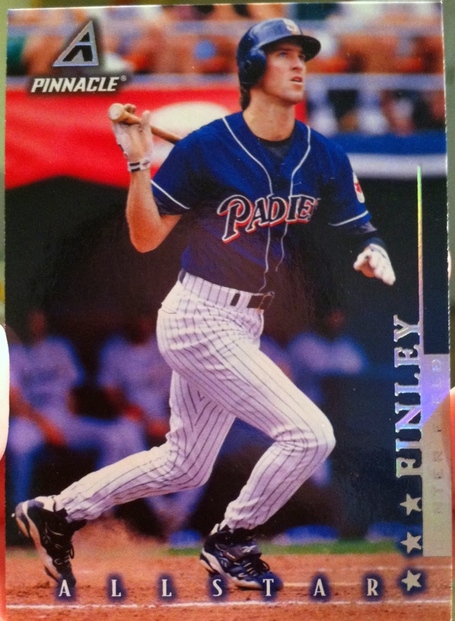 Well, the Padres needed to sweep the Dodgers in the last three games of the season to win their division, and after taking the first two, I remember driving to my buddy's house after church so we could watch the game on their TV (we didn't have cable, thus the necessity of a radio). As Chris Gwynn singled home the go-ahead run and Trevor Hoffman shut down the Dodgers in the ninth, one thought penetrated my mind.

Could we witness a playoff game? Like, in person?

I don’t remember attending a bunch of Padre games as a kid, but I remember being pleasantly surprised when we got tickets to see the Padres host the Cardinals for Game 3 of the playoffs. Unfortunately, the Padres dropped the first two in St. Louis, so it was win-or-go-home time at Jack Murphy Stadium.

It all started out so well, but then Brian Jordan and Dennis Eckersley worked some baseball magic, and the next thing I knew, I was staring blankly at the field below, wondering what had happened to my team. They had pulled out so many gutty victories that I had almost been expecting them to do it again. It didn't happen.

My eyes teared up a bit, and I remember thinking, "I’m twelve! I'm too old for this! Why am I crying about a stupid game?" I’m not sure if I really understood at the time why it tore me up so much.

When I was contemplating taking a leap off the balcony at the Murph as a twelve year old, I realize now that it wasn’t because I was angry or upset about the actual loss. It was because the ride was over. There wasn’t a tomorrow. There weren’t any more late nights listening to the Colonel describe a Steve Finley diving catch or a Tony Gwynn line drive. No cheering on my heroes. No more checking paper in the morning to see who they were playing today. It was just… gone.

What I didn’t realize then, is that it’s never over. There’s always another out, another inning, another game, or another season. The players, uniforms, and even the stadiums change. But even after all these years, I still turn into a kid when I flip that radio on. Regardless of the destination, I always enjoy the ride.