Earning a much-needed victory, but ALWAYS more importantly: a Dodgers loss. Liriano was hot hot hot, Stultsy helps his own cause, and Quackenbush achieves a career first.

For the fourth straight game, Eric Stults has given up 2 runs or less. With the offense working last night, and the pitching a bit off, tonight's synchronicity between a iron-walled Stultsy and a smart opportunity-taking lineup created a beautiful shiny Padres win.

Most of us also learned that Cameron Maybin was finally done serving his suspension for a medication policy misunderstanding. We didn't get to see him in today's lineup, but it's good to have everything behind him now so that he can focus returning to the Daddy Long Legs that we all know and love.

Tonight's action started in the 2nd inning. Jedd Gyorko found himself on base after swinging at the first pitch. Things got loaded up when Roberto Hernandez was played for 2 straight walks after 11 pitches total. With the Ninja Alexi Amarista up to bat, a little ninja one-out single was popped and the Friars rotated forward.

Now with Eric Stults at the plate; the man with the least amount of run support (2.60 RS average) in the entire league, was presented with a bases-loaded opportunity to do what his teammates have been failing to do for him for so long. And provide he did. Slapping a single opposite field off a lazy 90MPH sinker, Scott Van Slyke forgot how to field baseballs for about 10 seconds and both Jake Goebbert and Rymer Liriano were able to score.

Putting the ball in ball in play ends up being really effective when you have a bearded weirdo in left field slapping the ball around like he's got something against it.

Speaking of which, Liriano really showed off all of his tools today. Wrapping up the night with 2 hits, a walk, and representing the Padres' 4th run in the 4th. Rymer also got another shot to show off his speed and defense, both in Stults' RBI and a little pop line drive hit to him shallow right field. Reminiscent of his MLB debut, this time the ball was far more playable and Rymer laid out perfectly to rob a base hit.

Rymer, the beloved five-tool Dominican, redeems the lost liner from his first game.

By the end of the night, the Dodgers were being thoroughly handled by Stults. Given a chance to take the game and collect a save for Pads, Kevin Quackenbush came in to replace Dale Thayer after Thayer and Boyer kept the Doyers at bay. In 18 pitches, the Quack disassembled LA's last hope, ending the night on a tactical kick and a hell of a way to get your first major league save.

Futbol season ain't over yet. Quackenbush takes advantage of his webbed duck feet to cut off a sharp grounder.

Stults was the Stud today. Almost single-handedly driving our WPA into our favor. Though large WE% insignificantly spiked from scattered hits from the Dodgers, even the only LA run of the night didn't even leave a scratch after our offensive bout early on.

Plenty of people showed up to watch the Doyers lose tonight.

podpeople absolutely killed it in the game thread, concocting the most comments (43) and tying for the most recs (2) with C Callahan and B Cres. B Cres caught a candid picture of Stults at Dodger stadium tonight too. 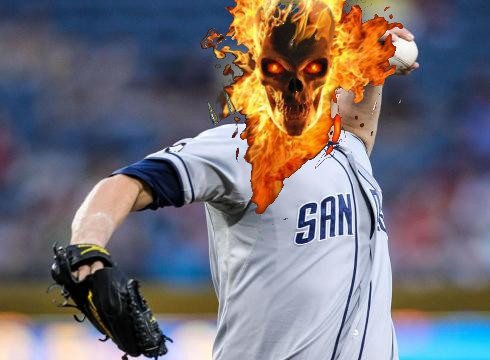