Who's worthy of the Padres Hall of Fame from the early days??

Share All sharing options for: A bigger and better Padres Hall of Fame: 1969-1979

Before I begin, I'd like to touch on a few topics.

First, I found out some details regarding the first ever vote in 1999. At the time, the committee consisted of 24 people total including 18 members of the Padres media (who have covered the Padres for more than 7 years with the broadcast media being represented by the sports director at their outlet), 4 members of the Padres organization, 1 member from the Madres and 1 member from the San Diego Baseball Historical Society. There was also a mysterious 6 person committee that nominated the 12 people that year and the voting went as follows:

The nominee needed 18 votes to secure a spot. Considering there were 89 votes placed from a 24 member committee, that obviously means that they could most likely vote for as many people as they wanted (average of 3.71 votes per voter). Of those 12 nominees, 7 currently reside in the Padres Hall of Fame. It's interesting that Dick Williams received no votes that first year and everyone who received more than 1 vote, except Ozzie Smith, have since been inducted. The first class was enshrined on the weekend of August 13th-15th 1999 in honor of the Padres 30th anniversary and would soon be "housed at the Padres new downtown ballpark, set to open in 2002". Swing and a miss on both projections there. It's interesting to see the Padres Hall of Fame, on the early sketch of Petco Park, sitting right where the 1090AM studios now are. 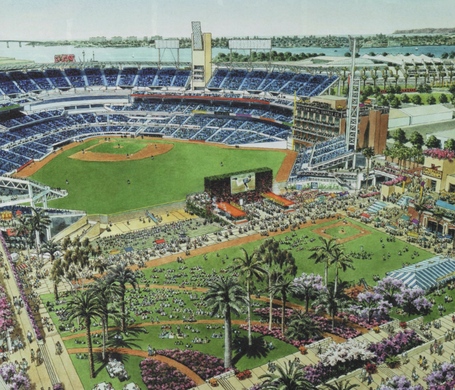 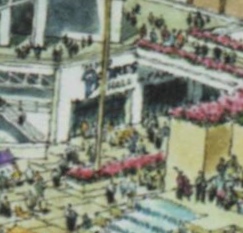 Lastly, I went to the Padres game on Monday night and visited the Padres Hall of Fame lockers in the Western Metal Building (1st time this year). Nate Colberts locker is totally gone and the others are poor representations of what honoring someone should look like.

There were 68 players that reached the 3 years requirement. Nate Colbert, Randy Jones, Ray Kroc, Buzzie Bavasi, Jerry Coleman and Dave Winfield are already in from this era. Listed below are my picks in alphabetical order.

Why?: Is a San Diego legend, spent 33 years with the Padres behind the mic or in front of the TV, when you think of Padres broadcasters, you think of Jerry, Ted & Bob, wrote an excellent book called Tales from the San Diego Padres with great stories throughout Padres history, beloved in San Diego (the amount of people who came up to him to chat or shake his hand during my Beers with Bob segments with him were insane)

Why?: If you have to ask then I just don't know what to tell you. It's the Chicken! The #1 mascot of all-time hands down!

Why?: There wasn't much to celebrate on the field in those early days so the "Tuba Man" did his part in bringing joy to the fans.

Why?: The Flan Man isn't getting in on his stats, spent 10 years playing for the team and was always a fan favorite, was part of the '96 and '98 playoff teams as a coach and was still a fan favorite, moved on to the broadcast booth where he was a fan favorite, is now coaching in San Francisco and has been voted on by Padres fans as the least hated Giant.

*Edit: I added The Chicken (HUGE blunder on my part) and Tuba Man to this list.

A bigger and better Padres Hall of Fame