Bob Davidson does not know how to do his job at all, and more.

Before we get into the garbage calls, the nonsense umpiring, and the basic lack of common sense, let's look at what lead up to the anticlimactic finisher of tonight's hard-fought loss.

Tonight in St. Louis the Padres took on the team with a bird mascot. Coming off a series sweep against the Rockies, San Diego was looking to extend their winning streak and start the series against the Cardinals on a good note.

Things looked fresh. Eric Stults, who posted an ERA of 1.42 for his first week of August, was back on fire against the Cards. Tonight going 7 innings giving up 4 measley hits and only allowing 2 earned runs (in the form of a two-run home run) with one strikeout and one walk.

Put on the board 2-0 in second, the Cardinals held the Padres through five innings. Once things got into the sixth, some fun happened. Jedd Gyorko took advantage of some RISP and grounded into a fielders choice to sneak in Will Venable and sacrifice The Seth Smith at second.

For a 6ft 230lber "power hitter", Rymer is really making those infield singles sting the opposition.

Tommy Medica was looking awfully lonely on third, so Rymer Liriano gave the Busch Stadium crowd their first taste of the Dominican rookie with an RBI-single to knock that Tommy in to tie things up 2-2.

Two innings later in the 8th, the Cards pushed to end the game on top. Once Alex Torres came in to relieve Stults of his great outing, he would work Tony Cruz into a full count. On his seventh pitch dealt to Cruz, he would get him to chase after an off-speed pitch in the dirt.

You can see the bat casting a shadow over the ball it never hit; almost as well as you can see Davidson not knowing what the hell is going on down there.

Cruz swung and whiffed just hard enough to get himself a seat back on the bench for the first out. At least, that's what would have happened had Bobbert Davidson not ever been born.

Now with another runner put on, and an RBI-double to follow, things were unbalanced once again as the score was pushed to 4-2. The game was set up for a tough last-ditch effort in the 9th for the Padres, who were absolutely ready to produce, but couldn't have anticipated the disgusting event that would take place.

Yasmani Grandal single. Alexi Amarista single. Chris Nelson walk. Bases loaded, one out, and our very own Jake Goebbert at the plate. With a first pitch fastball Goebbert drilled a clean hit into right field. Grandal immediately scored, and the Ninja is sent home to challenge the arm of Shane Robinson for ultimate clan honor. A.J. Pierzynski is dealt an ideal bounce to cut off our Ninja, but misses the tag. Ninja sneaks through A.J.'s samurai defense, and beats him to home plate to tie the game 4-4.

Except you guys forgot that Bob "consistently voted by players and managers as one of the worst umpires in Major League Baseball" Davidson was tonight's umpire.

Immediately after Amarista's score (which is preceded by Pierzynski acknowledging his missed tag by scrambling after Amarista to tag him again), Bobby "I have resignation and suspension sections on my Wikipedia page" Davidson would do what no umpire with half of half of a brain should ever do.

Full playthrough of the missed tag, confusion by Davidson, and chase by A.J. knowing he missed the tag.

"Did you tag him?" Bob "repeated violations of the Office of the Commissioner's standards for situation handling" Davidson

He asks A.J. Pierzynski for the St. Louis Cardinals "Did you tag him?". Without a shout of a doubt, A.J. confirms, which why wouldn't he, and Amarista is called out.

The clear sign of a competent officiator is vaguely pointing twice followed by bewilderment.

But don't worry. We're in a new era of baseball. We have instant replay, so things like this aren't allowed to happen even if Billy-Bob "also has Other Controversial Calls in his Wikipedia page" Davidung colossally fails at his one and only job in this world. The play is reviewed, and the confusion is cleared up. Except it's not.

Even in one of the least-flattering angles it's apparent there's no movement from contact. Amarista even had to dodge the bat that Goebbert inconsiderately left. Ninja.

The call is upheld because there isn't "clear enough evidence" somehow that both A.J. and Alexi confirmed the opposite of Dinguson's conclusion by their secondary actions following the missed tag.

The score is dialed back to 4-3 and Will Venable draws a walk. But with the life and soul of the dugout sucked clean by literally satan himself, Medica would go on to strike out and end the ballgame. Bud Black came out with a replica Valyrian sword from Game of Thrones and swung at Davidson, and was promptly ejected. Or at least that's what I was told. 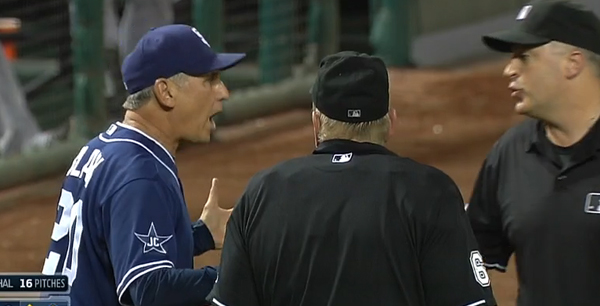 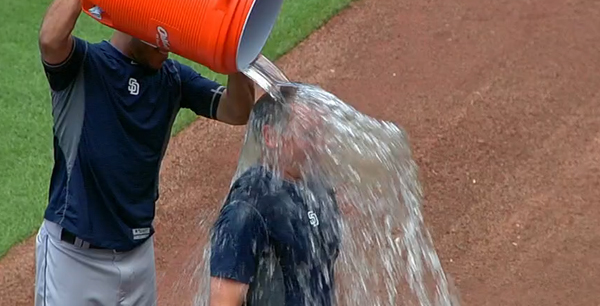 Instead of getting the opportunity to see 9th inning tie-game baseball, a chance for the Padres to give fans a five-game winning streak to come home from work to, and a solid win against a tough team; we get left with a really, really bad taste in our mouths and a roadblock on our path to close the gap to second place in the NL West.

Tyson Ross will try to give the Friars a chance to bounce back against the atrocities of Thursday night against Lance Lynn, both pitchers seeing their fair share of starts. But it's going to be hard to shake a loss like this.

The win projections tonight's were shaky for us, never really pushing over into our favor.

A bunch of you poor GLB warriors actually had to witness this dumpster fire live. jodes had like 7 recs tonight and Darklighter was our most active. I am so sorry.