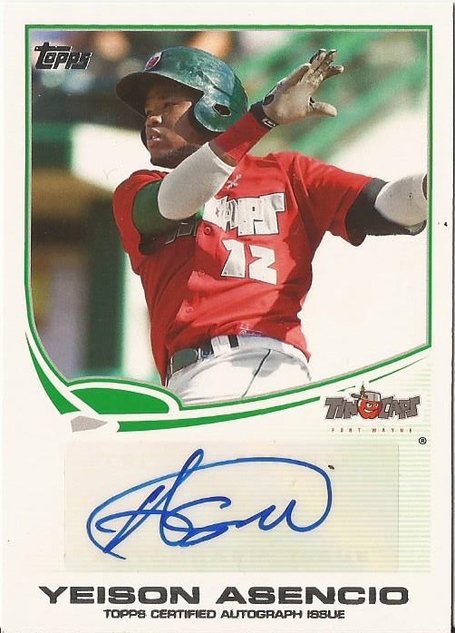 Yeison Asencio was flawless at the plate in his AAA debut Monday, singling in both his at-bats and scoring a run in El Paso's 8-2 win over Nashville. This is good for him, good for the Chihuahuas, and good for the organization, but I'm self-absorbed and would rather focus on why it's good for me. I picked up the autographed card of Asencio shown above last week and now I have an excuse to show it off.

Asencio was promoted from AA San Antonio in a quick game of musical chairs. He sat down in El Paso when Rymer Liriano grabbed a seat in San Diego, leaving Jeff Francoeur standing. Asencio earned his bump up by hitting .284/ .323/ .409 in 455 at-bats over 117 games with the Missions this year. He hit 21 doubles and three triples to go along with his career-high 10 home runs.

Now that all that numbery business is out of the way, I can get down to typing about the card. I'm not much of an autograph guy, but sometimes I see a deal so good I can't pass it up. This was one of those times. I snagged up a copy of this card, his 2013 Topps Pro Debut Autograph issue, "number" PDA-YA, for just two bucks. Two dollars! That's about the same as an energy drink, or a 40 if you're so inclined, and those are gone in a matter of minutes.

I'm not positive, but this may be my first TinCaps card. By the time this card hit the shelves, Asencio had already made the move up to High-A Lake Elsinore, where he played 57 games last year before being promoted to San Antonio. Since he spent 2012 in Fort Wayne, he's listed with them and pictured in Christmas colors. I'm glad Topps didn't tamper with it and try to 'shop him into a Storm uniform, because their Photoshopping these days is just as lazy as their airbrushing was in the '70s.

If Yeison continues to move up the ladder at the rate he has, we might just see him pictured as a Padre on a 2016 Topps card. But until then, this will tide me over.