The Barvs pulled themselves together and kept San Diego to the dreaded "golden three".

Ten strikeouts and a few unearned runs shot out from the Barvs created an unstable environment (and a loss) for the Friars tonight. Nine hits and some sloppier-than-usual pitching from rookie Odrisamer Despaigne gave Atlanta enough to stop the San Diego three-game winning streak.

Yonder Alonso returned as Jake Goebbert was sent down. Alonso was hitting .280 in 25 AB's down in El Paso, and after going 1-3 yesterday in Triple-A, went 1-4 tonight in Atlanta. Medica went hitless in left field today, and Alonso didn't push any convincing arguments against Julio Teheran.

Squeezing Out a Win

An opportune suicide-squeeze in a 2-2 gave the Braves the lead, and kept them ahead for the rest of the night. On the other hand, the Padres' three runs came in the form of a Yasmani Grandal double in the 4th, and a Yangervis Solarte RBI single in the 5th. Once the Padres arrived at that infamous "golden three", where Mad_Villain pointed out that "the Padres are 35-5 when scoring 4 or more runs."If our streaky offense has any indicators, it's that once we hit that 4th run, sighs of relief are quite justified.

More Baseball To Be Played

With tonight's loss the 4 game series is sitting 1-1. It'll take those back-to-back wins to staple together winning three series in a row. Something we definitely haven't done yet this season. Minor only lasted 3 innings in Miami last week, giving up 6 earned runs. That's a sexy looking number given the Padres have scored a combined 28 runs this week so far.

I caught the Padres' final run of the night in Lolita's, taking a little break from the Comic-Con madness. 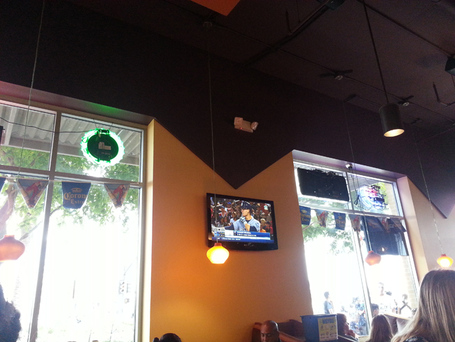 Carne Asada fries and a drink for $8 yes pleez.

Another rec-crazy night. It's Saturday, so it's fact most of you were drunk. jodes was the drunkest with 8 recs. The closest to that was abara, buzzed with 4.