The boys are at it again.

Last night the Padres got Jedd Gyorko. Today Jake Goebbert is the victim of the gum-cup-hat prank.

Ian Kennedy did a masterful job not letting on to Goebbert that he is being pranked. At one point, Goebber looked behind him at some of the players trying to get throw seeds in the cup. Somehow he still didn't catch on. He thought they were just throwing seeds at him.

BUT WAIT, THERE'S MORE. Later in the game we found out the culprit behind the cup prank. And it's not even the least bit surprising. 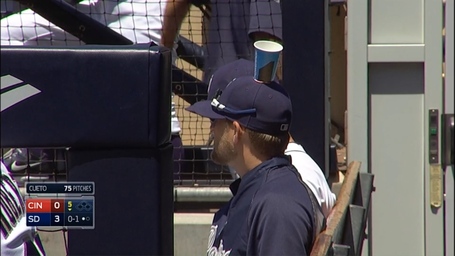 Who should the boys prank next?