Share All sharing options for: 06/27 Padres Preview: Game 80 vs. Diamondbacks

The Padres are back in action tonight following a Thursday off. They're back at home after taking two out of three games from the division-leading Giants in their house. Coming to town are the last-place Diamondbacks, who could conceivably knock our Friars into the cellar with -- and only with -- a sweep. Let's hope that doesn't happen; I know the outlook isn't good for the rest of this season, but it's at least a good two months before I'll show any symptoms of tank fever. 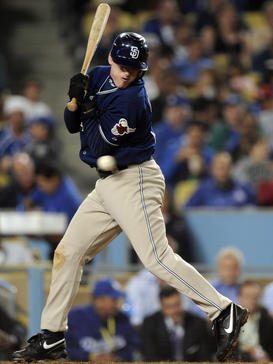 Tyson Ross will go up against Brandon McCarthy for the second time this season. The other time they faced off was a month and a day ago, although neither starter factored in the decision; A.J. Pollock hit a two-run walk-off homer off of Kevin Quackenbush to give Arizona their third of four wins in six games against the Padres this year.

Ross has been one consistent positive for the Padres this season, his first as a full-time member of the rotation; he has made all sixteen of his starts as scheduled, matching his career-high in starts which he set last year. He has lasted at least five innings in all of his appearances; a mere three innings tonight would give him the team lead in innings pitched, passing Ian Kennedy's 103.1, which looks more like a radio station than a statistic. Not only has Ross shown up and clocked in when he was on the schedule, he's also filed quality reports while he's been in the office. He has a 3.22 ERA and nearly a strikeout per inning to go with a typically deceptive 6-7 record.

Brandon McCarthy has been having an altogether ugly season, getting knocked around to the tune of a 5.38 ERA and 1-10 record. That one win did come against San Diego back on May 3, so he's got that going for him. The league has been hitting .298 against him, so these Padres should be able to hit at least .167 against him. Try to group 'em, fellas!

On a non-pitching note, Carlos Quentin was initially in the starting lineup, but was scratched; this time it's a sore left shoulder. You almost thought he really did get traded to the Indians there for a second, didn't you? Here's who'll be facing McCarthy as Q looks on: