NBC 7's Consumer Bob has a nice writeup and segment interviewing a sports memorabilia store owner. Henry Frank, from Centre City Sports Collectibles says a lot of nice things. Lots of fans. Generous with his time. Signed lots of autographs and memoriabilia. Since Tony's death, Frank says that people have been calling a lot, and while I'm sure lots of people are curious about how much their own memorabilia might be worth, Frank focuses his comments on people who are looking to purchase Gwynn memorabilia rather than sell it. Consumer Bob even reiterates as much.

"I have customers who don't collect for the money," Frank said. "Just because they want a piece of everything he was ever on."

For fans, that will be easy. Tony not only leaves behind great memories on and off the field, but also an ocean of memories in the form of collectibles.

And then the Social Media Person had to get involved... 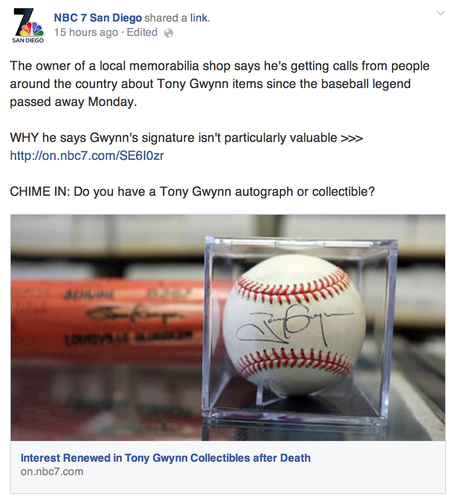 Hmmm... People are wondering if they can buy a keepsake about Tony Gwynn, but it would be more interesting if there was a "Ted Williams' Psycho Son" angle or some crazy hoarders... I'll just imply greed with "getting calls"... And Tony signed a lot of autographs? Keepsakes aren't hard to find? They're not expensive? I'll just say "not valuable". That'll get people in a rile. Telling them that getting Tony Gwynn to sign something for them was worthless and pointless... And then to top it off, I'll just straight up ask people if they own something that I just mocked...HAHA

Kudos to Consumer Bob and Henry Frank's tasteful story about a potentially distasteful topic, but whoever runs NBC 7's Facebook page should be ashamed of themselves today.

And if you ever got Tony Gwynn to sign something for you, I'm sure you're currently cherishing the memory of meeting him and are thankful that you have something to remember him by.... Regardless of how cheap and uninteresting a story that is to the Social Media Person.