Share All sharing options for: Fans Mourn The Loss Of Mr. Padre

For the second time this year, Padres fans gathered at Petco Park to mourn the loss of a hero. Like many of us, my first reaction to the news of Tony Gwynn's passing was shock. After a good, solid cry, my second thought was that I needed to be at Petco Park. So I threw on my cap and my jersey ('98 pinstripes; the only jersey I have that Tony wore) and headed downtown around 11. There was already a good crowd surrounding the statue, along with cameras and reporters from every local news outlet. Outside of those reporters, there wasn't a lot of talking. Most of the communication was wordless; a tear here and a hug there. I overheard a snippet of a story about a kid who went to his first baseball game when he was one month old. His father took him to Tony's final game.

We've been hearing stories like that all day, and I'm sure we'll hear many more in the days, weeks, months, and even years to come. To know what Tony Gwynn meant to the city of San Diego, you only have to look at that statue and the tributes adorning it. His impact here was so great that the Chargers stopped what they were doing to remember him.

Out of respect for the passing of Tony Gwynn and his family, Chargers cancel today’s #ThankYouSD event.

A large contingent of Chargers staff and players arrived at the impromptu memorial with sunflowers in hand. 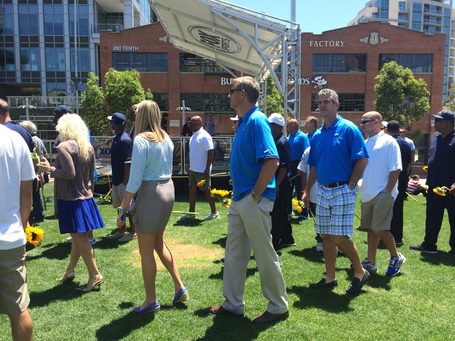 The procession of Chargers staff and players.

The biggest shock of the morning came when Tony's voice came out over the PA system. Someone had dug out an old tribute from when he retired (aired on Channel 4, most likely) and set it up to play on the screen in the Park at the Park. There were highlights, interviews, and best of all, that bright, unmistakeable laugh.

If you want to pay your respects, the Padres are keeping the Park at the Park open until 11:30 PM tonight and tomorrow.

Tony Gwynn has died of cancer