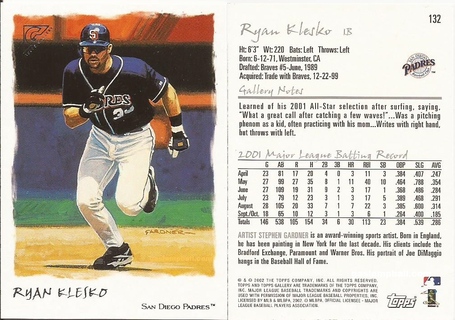 Today is Ryan Klesko's forty-third birthday, so I dug around for the coolest card I could find of him. In my meaningless opinion, the neatest one I have of him is a parallel of his 2002 Skybox eX card; it's translucent plastic, but scans or photographs of it don't do it justice, so here's the runner-up.

The painting on the front is phenomenal, but the stark and nearly-colorless back is where it gets interesting to me. I have to say that I refuse to believe that's an actual quote. That sounds so 1950s, like it was written by an old Iowan who read an article in Newsweek several decades ago about the emerging surfing subculture. That seriously sounds like something Frank Hardy would say to his friend Chet as they went undercover to bust some surfing smugglers who kidnapped Callie Shaw.

But yeah, that painting. I don't know anything about Gardner's portrait of Joe DiMaggio and I don't care enough to Google it, but I like his work here. Bonus points for capturing the orange line at The Murph.