Last night the Padres promoted their On Deck Suite seats by having the team's TV broadcasters, Dick Enberg and Mark Grant call the game from them.

Broadcasting from the #OnDeckSuite tonight, Dick and @Mudcat55 get ready for tonight's game. Tune into @FOXSportsSD! pic.twitter.com/9oFv4DHjGN

The duo visited with the visiting team, they ordered food and beverage and encouraged fans to call a ticket representative to purchase suite tickets.  Mark Grant in particular was having fun with the change in scenery.  If not for him keeping things loose, I'm sure the stunt would have come off much more pompous.

During breaks in the game, the broadcasters threw to taped segments of them visiting the restaurant that is available in the all inclusive seat price.  President Mike Dee even sat with the broadcasters for an inning telling them about how his idea for the seats came about in the late 90s.  They talked about the seats a lot, probably more than they should have.

Many fans on Twitter thought the game long sales pitch was distracting and inappropriate.  Realistically how many fans can actually afford these seats, that are likely over $500 a pop?  Why not focus on those that can afford them instead of the entire Fox Sports San Diego audience?

FSSD and the Padres erred last night. As astutely pointed out by the commenters of this post, the Padres wanted to share some of the cool things they’ve done to the park during the 10 year anniversary of Petco Park so I understand the desire to showcase these fresh additions. But I would suggest finding another forum to push new features and services.

For me, I thought it was a fun idea. It was especially nice to see Dick Enberg get off his throne in the broadcast booth and slum it with the proletariat in front row field level seats for once.  The sales pitch was a bit much at times but that just allowed me to make snarky comments on Twitter, which only added to the fun.

As the game continued into extra-innings and the wee hours of the night, I settled in for bed.  With the game on the radio I flipped through my newly acquired Baseball Fantography paperback by former Padres executive Andy Strasberg.  The book is a conglomeration of fan baseball photos from a bygone era.  The first chapter is dedicated to Padres broadcasters.  There I saw the related picture below.  You can see a clearer version on the Fantography website (picture 16): 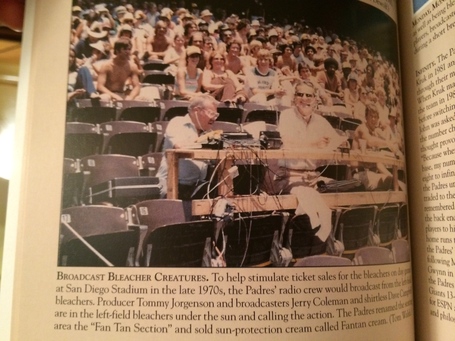 There sits late great, Voice of the Padres, Jerry Coleman and a shirtless Dave Campell soaking up the rays and broadcasting from San Diego Stadium's bleachers in 1979.  The idea was to stimulate ticket sales in the bleachers for day games.  They called it the "Fan Tan Section".  Now this is an idea made for the masses.  Everyone can afford a bleacher seat, especially back then when they were probably $3.