The San Diego Padres couldn't have planned this years Spring Beerfest any better. Preceding a stammering 2-0 loss to the last-place Diamondbacks; having everybody load their bodies with alcohol in a celebration of beer to prepare ourselves for a heart-wrenching game was really the best case scenario.

There was the typical from Anheuser-Busch, Kona, Ballast Point, Stone, MillerCoors, Pacifico, Mission, Green Flash, and Karl Strauss. Tasty stuff for a $5 deal, but very far from being the main attraction. Park at the Park was featuring some damn-good stuff from:

Each craft/microbrewery brought their two tastiest to show off, and a few spare to appease the thirsty crowd with all beers at $5 apiece by purchasing a $5 "Friar Fund" voucher. The park atmosphere also provided music, food, photobooths, and foosball/ping-pong tables that settled in an archetypal breezy 82° San Diego day. 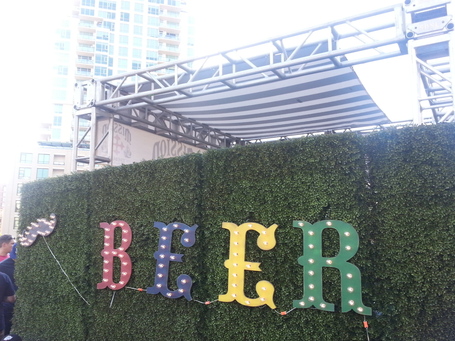 Just in case you weren't 100.67% positive what the whole deal here was.

The layout was simple, with booths wrapped around the baseball diamond. Even more rested at the top of the park hill next to Mr. Padre's statue, and there was plenty of room to roam around and find every stout, IPA, pale ale, etc. to your heart's desire. 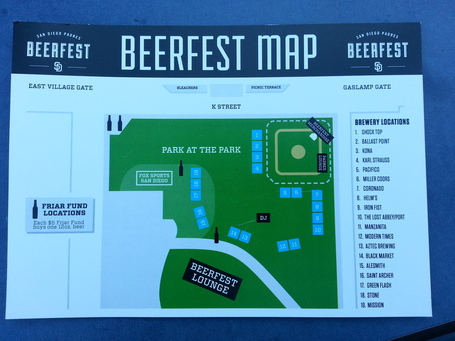 An easy-to-read-while-buzzed map of Park at the Park.

"First pour" was at 5pm, and people slowly filled in over the first half hour. At the start of the day it was spacious with a waiting time under a minute at each booth. Over the course of time people packed in, and the elbow-to-elbow crowd hiked the waiting time to around 10 minutes, though the quality of product still justified the wait. 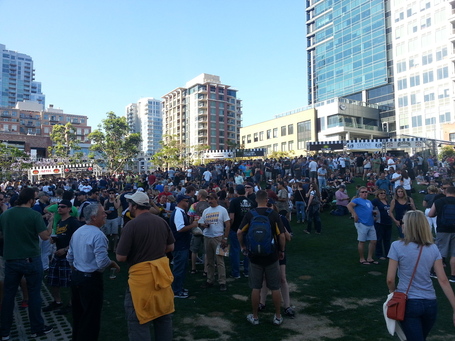 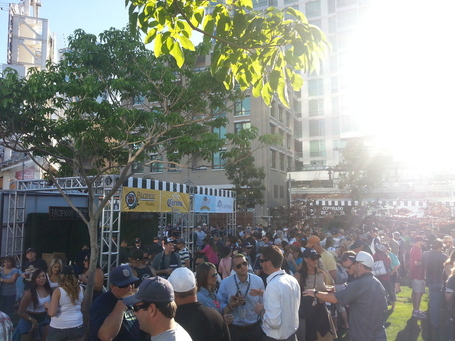 Now I'm not much of a drinker. I'll grab a beer at a game, party, or whenever there's a burrito involved. But when at a Beerfest, in one of the nations top beer cities, in the back yard of the nation's greatest beer ballpark; I had to try something rad. I've had some decent IPA's and Pale Ales, so I wanted to try something a bit different. 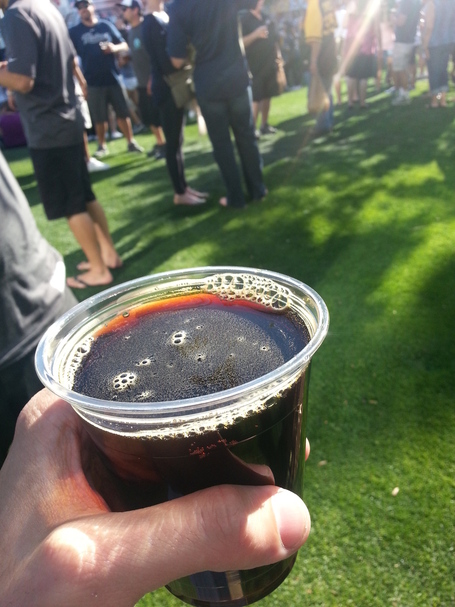 I'm a big fan of Mexican beer, and other than the booths of the typical Pacifico and Corona; Aztec Brewery looked like a safe bet in that vein. The company originated in Mexico, but died out in San Diego until the brand was brought back to life in 2008. Their "Día de Los Muertos" themed "Noche de Los Muertos" caught my eye.

It ended up being a unique, malty stout that had a taste of coffee, chocolate, and brown sugar with light peppery cinnamon and caramel. Something that was completely on the opposite spectrum of what I normally drink; but was pleasantly surprising. It gave me something that could hold its own as both tasty and refreshing while I walked around, talked with friends, and took in the atmosphere. It was a good embodiment of what's so damn enjoyable about Beerfest at Petco Park and what's so great about Petco Park:

The venue remained a perfect spot as shown from Beerfests in the past and present. The weather couldn't have been more San Diegan, and there was just the right amount of people in attendance; keeping it social but not overwhelming. Tie that in with the convenient Hodad's and Phil's BBQ carts right in front of your face and you've got a winning combination; which is something that was very desperately needed that day.

The next Padres Beerfest will be held on Friday, June 6.