I've never really been drawn in by the allure of relics cards. Oh, sure, I think they're cooler than being cool (ice cold!), but I tend to look at the price tags, calculate how many Joey Cora cards I could get for that amount, and then do that instead. I do have a few jersey cards that were too good of deals to pass up, but this is my first game-used bat card. My friend Shane and some friends of his have a periodic trade night and he snagged this up with me in mind. It's one of the nicest things anyone has done for me, but its spot on the list falls somewhere below the time he let me name his daughter.

As one of just 18, this is the scarcest Tony Gwynn card I own, and one of the scarcest cards I own, period. I have a 1-of-1 Alexi Amarista printing plate that came along in the same package (which I'm sure you'll be seeing here before too long), and three of the numbered-to-five 2012 Leaf Memories buyback cards of Joey Cora, but I think that's about it. Even cooler than this card being one of 18 is that it's number one of 18. That seems a lot neater to me than, say, number 12 of 18. And yes, we're thinking the same thing: They totally should have made one more of these so they could be numbered to 19. 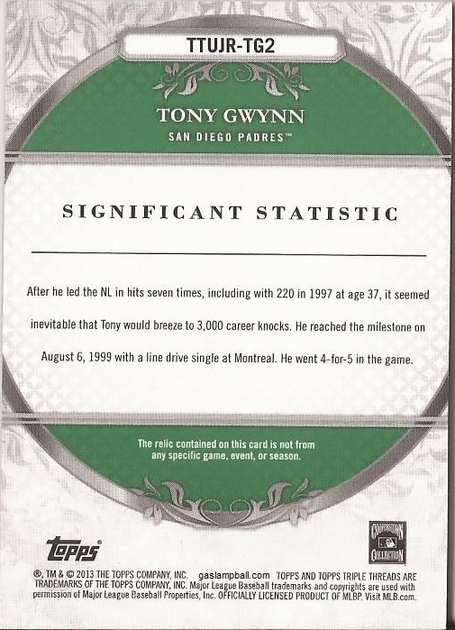