Not only was Chris Cannizzaro an original Padre, he was the team's first All-Star. It wasn't as much a celebration of his achievements as it was an indictment of the inaugural team as a whole, since he hit .220 with four homers in 134 games that year. He settled into a backup role with the Padres over the next season and a half before heading to the Cubs and Dodgers' benches for a few years. Cannizzaro spent most of 1974 in AAA for Houston before being reacquired by San Diego on August 1. He got into 26 games, hit below the yet-to-be-named Mendoza Line for the second year in a row, and that was the end of the road.

He's pictured here on his 1975 Topps card, which was issued after he played his final game. The '75 design is one of the most iconic and celebrated in Topps' long history. In an unprecedented anomaly, each team was not assigned one set color scheme on all their card fronts. The funky (and I mean that in the best possible way) combinations were seemingly both random and endless, but the yellow and powder blue that Cannizzaro got is my favorite pairing, with the pink team name as a bonus.

The back features his complete career stats, along with the typical biographical information you find on the back of a baseball card, including the one bit that is of particular relevance today: his date of birth. 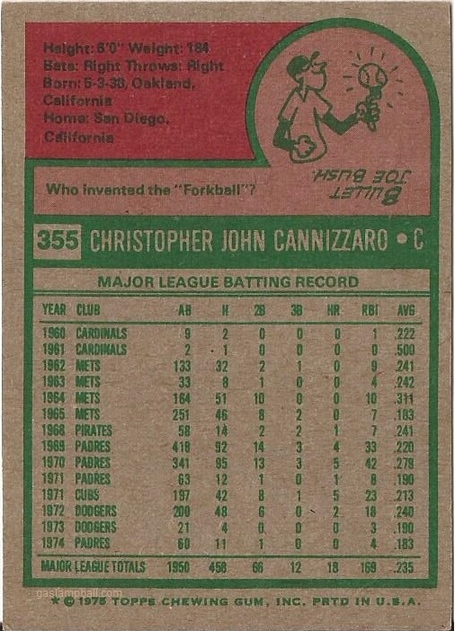