Padres history: Opponents to hit for the cycle

Share All sharing options for: Padres history: Opponents to hit for the cycle

As you may have heard at some point over the past 45 years or so, the Padres have yet to have a player hit for the cycle. Much in the same way they've been no-hit eight times while they wait for their first one of those, the franchise has been on the wrong end of a cycle six times.

Hall of Famer Lou Brock became the first player to hit for the cycle against San Diego on May 27, 1975. Brock led off with a single against starter Dave Freisleben, homered in the third, and settled for a triple in the fifth when he was cut down at home going for an inside-the-park home run. Dave Tomlin relieved Freisleben in the sixth and struck Brock out. Alan Foster had no such luck in the eighth inning, allowing Brock to double and come around to score the final run of a 7-1 Cardinals' win. And just because he's Lou Brock, he threw in a stolen base for good measure.

The 11 Padres to fall a single shy of the cycle 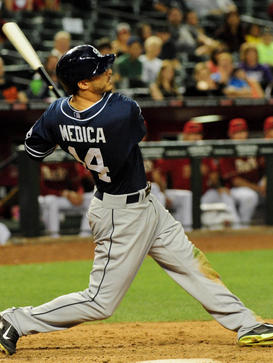 Fourteen years passed before another player hit for the cycle against the Padres. Jack McKeon's Padres were facing Pete Rose's Reds in Cincinnati on the evening of June 2, 1989, and young center fielder Eric Davis had a day to call home about. Davis doubled in his first at-bat to drive in Barry Larkin and tie the game at ones. He singled Larkin home in the third for a 3-1 lead, and homered just one inning later to plate Larkin and Chris Sabo for an 8-1 lead. With starting pitcher Walt Terrell finally out of the game, Davis faced Dave Leiper in the seventh needing the most difficult spoke of the cycle. You know what happened next. And yes, Barry Larkin was on base that time too. With Davis's cycle complete, Rose lifted him for pinch-runner Herm Winningham.

Less than two years later, on April 22, 1991, Giants second baseman Robby Thompson added his name to the short list. Greg W. Harris started the game, but threw only one pitch to leadoff batter Thompson before leaving with pain in his elbow. Mike Maddux took over and promptly gave up a triple for Thompson's first hit. Thompson got him for a homer to lead off the third inning, and struck out to end the fourth. Pat Clements entered the game in the fifth and surrendered a single to Thompson in the sixth. Padres closer Craig Lefferts entered the game to protect a 7-4 lead and was greeted by a leadoff single from Thompson. Although Thompson came around to score on a groundout by Will Clark, San Diego held on for a 7-5 win.

Greg W. Harris also started the next game on this list, but stuck around for seven innings that time out. In a May 9, 1993 game at Wrigley Field, Harris gave up the first three of Mark Grace's four hits. Grace doubled in the first inning and singled in the third, but was stranded both times. He lined out to lead off the fifth, and was stranded after a two-out triple in the seventh. With the Cubs trailing 5-1 in the bottom of the ninth, Grace capped off his afternoon with a two-out, three-run homer off Rich Rodriguez to pull within one. Gene Harris came in and got Ryne Sandberg to line out to shortstop Kurt Stillwell for the victory.

Eight years came and went before another opponent registered a cycle at the Friars' expense; it was also the first that San Diego fans witnessed in person. The record-setting Mariners stormed into town with a 51-14 record on June 16, 2001, and had the pleasure of facing Carlton Loewer. John Olerud led off the second inning with a double and came around to plate the first of five runs scored by Seattle that frame. Since they batted around, Olerud led off the third and notched his triple that time up. He scored on a single by Mike Cameron, and that was the end of Loewer's day.  After Loewer's replacement Jose Nunez held Olerud to a single in the fifth inning, Olerud reached on an error by shortstop Chris Gomez to lead off the seventh. David Lee was on mop-up duty by the time the ninth inning rolled around, and you know the rest. Olerud put an exclamation point on his day with a three-run shot to seal a 9-2 Mariners win.

The most recent cycle hit against the Padres came nearly a dozen years ago, on September 18, 2002. Greg Colbrunn of the first-place Diamondbacks got started with a first-inning single against Oliver Perez of the last-place Padres. Perez struck him out swinging his next time up, but Colbrunn got his revenge in the fourth inning with a two-run homer to put Arizona up 6-0. He added a double against Dennis Tankersley his next time up, and took Doug Nickle deep in the seventh for his second homer of the game. His last chance at a triple came with one out in the ninth inning, and Jonathan Johnson was happy to oblige. Johnson did manage to strand Colbrunn on third, avoiding the indignity of contributing to the 10-3 loss.

All in all, that's quite a respectable collection of players. Colbrunn is the only one of the bunch to never make an All-Star game, but he was no slouch at the plate. He had a number of .300 seasons when he was being utilized properly as part of a platoon, and retired with an OPS+ of 106. The other five players all have multiple All-Star berths under their belts, received MVP votes, and appeared on a Hall of Fame ballot. Brock, of course, was elected in his first year of eligibility.

With any luck I won't have to update this, and the next time I refer to it will be as a footnote when I'm writing about the first Padres player to hit for the cycle.