El Paso Chihuahuas manager Pat Murphy gave his bullpen a rest in today's 13-7 loss to Las Vegas, sending not one but two position players to the mound. Jeff Francoeur was the first, and if Murphy had left it at that, it wouldn't be newsworthy since it was Francoeur's sixth pitching appearance this season. The part where it got interesting was when Cody Decker took over for Francoeur in the ninth inning.

Position Players Who Have Pitched For The Padres 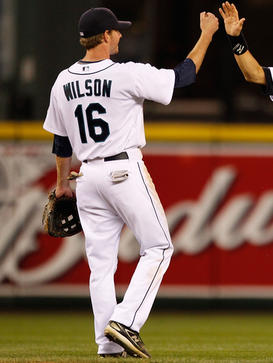 Eight position players have taken the mound for the Padres a total of ten times.

In Decker's six years with the organization, he had played every position except pitcher, center field, and both middle infield positions; he can now scratch the first one off that list. With the Chihuahuas down by six runs entering the ninth inning, Decker moved from first base to the mound and promptly retired the first two batters he faced on fly balls. Hot-hitting centerfielder Kirk Nieuwenhuis doubled for his fourth hit of the day, but was stranded on the basepaths as Decker induced a harmless grounder by the opposing pitcher Ryan Reid for a 5-3 putout to end the inning.

Francoeur's sixth game on the mound was his fifth scoreless outing. The one time he did give up any runs was his previous appearance when he got touched up for three earned runs a dozen days ago against these very same Las Vegas 51's. In fact, four of his six outings have been against the 51's- all losses, of course.

Although I'd prefer that the Chihuahuas won all their games, I can't help but love that this is what happens in their losses. While I'm sure this isn't the last time we see Frenchy on the hill, I hope this is also the start of something new for the Antihero. And if he doesn't take the mound again, I hope he at least makes a short film about the one time he did.