Over the weekend I went to the beach in La Jolla and decided to make a side trip to the top of Mt. Soledad.  The weather had finally cleared up on Sunday and the views were tremendous.  I also thought a viewing of the military memorial plaques surrounding the controversial cross atop the mountain would be appropriate on Memorial Day weekend.

I was watching an episode of Ken Kramer's About San Diego on PBS not long ago when he mentioned that a particular military veteran's plaque was near that of Jerry Coleman's.  I decided that I'd make it my mission to find the "Voice of the Padres"' plaque.

I found a picture of the plaque online so I knew what it looked like, but it still took 3 laps around the memorial and about 45 minutes for me to eventually find Jerry's amid the thousands there.  I tried scanning from a distance at first looking for the position of the photos on each plaque, but eventually had to get up close and do a more detailed search. 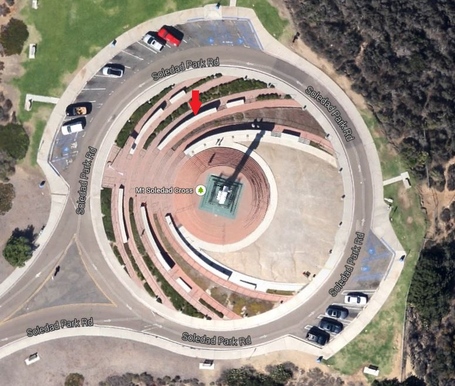 My tenacity paid off and I eventually found it.  It was on the center ring of the monument on the northern side and about waist high.  I placed an arrow on the above picture, if in case you want to visit it yourself. 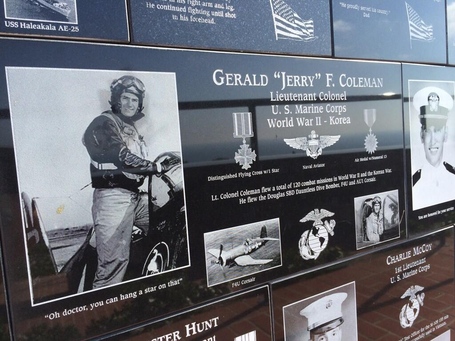 Fortunately Jerry wasn't among the war dead that we honor on Memorial Day, but as a recently deceased military veteran he was in our thoughts all the same.

On a side note, a member of the Mighty 1090 radio team took a picture of Jerry Coleman's headstone at the military graveyard in Miramar yesterday and many members of their staff tweeted it out.

Memorial Day pic for all #Padres fans. Col Coleman. My partner. My hero. At rest pic.twitter.com/FTJq1IQsJW