Pitcher Mike Corkins, a career-long Friar, turns 68 today. The Riverside native and Mount Robidoux High graduate is pictured here on his 1974 Topps card. While that's a good photo on the front, the best stuff is on the back, as is often the case. 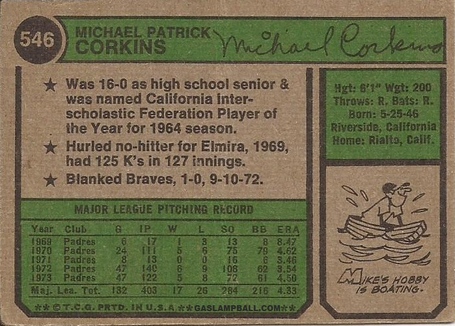 That shutout against the Braves, which happened ten years to the day before I was born, was the only one thrown by Corkins in his 157-game, 44-start career. He worked in and out of trouble, walking four batters and allowing seven hits, all singles. Atlanta had a baserunner in scoring position in each of the first five innings and went down in order only once, in the eighth inning. The Padres lone run came on a home run by Leron Lee leading off the bottom of the seventh.

While that was Corkins's high point on the mound, he also made an impact with his bat. A lifetime .202/ .264/ .345 hitter in 140 plate appearances, he is the second-most prolific home run hitter among Padres pitchers with five. One of those came in a game he entered in relief, one of just seven such occurrences in team history.